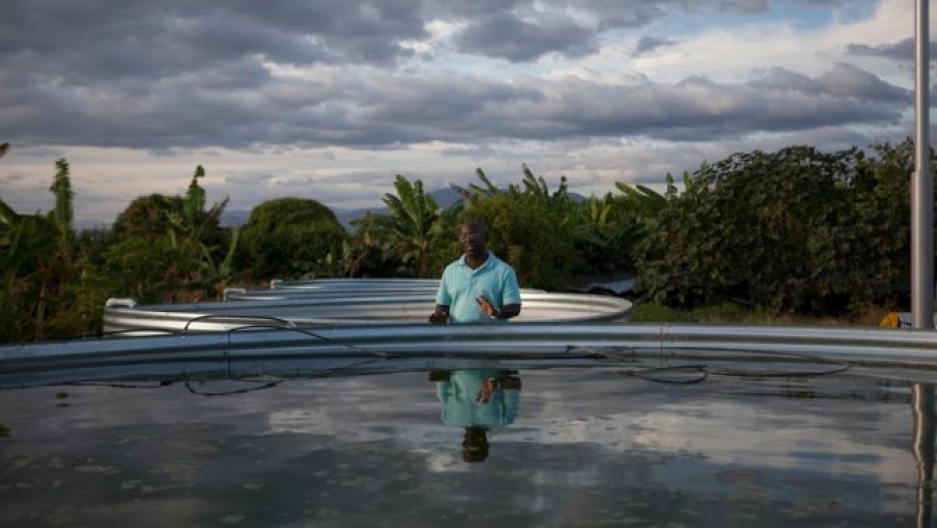 Valentin Ade, who runs a fishery for tilapia and shares the work and profits with local villages in Haiti.
Credit: Ron Haviv
Share

CROIX-DES-BOUQUETS, Haiti — VALENTIN ABE probably never saw himself as the savior of 17 different villages in Haiti in the post-earthquake world of 2010 and 2011.

A native of the Ivory Coast and a Fulbright Fellow at Auburn University who was finishing up his Ph.D. studies in aquaculture a few years ago, he was sent to Haiti by the university and some of their supporters “to examine what might be possible to accomplish with this kind of farming here.”

Tilapia farming, that is.

He came down and looked, and upon returning to Alabama stated in his research report: “Haiti has huge potential.” The university, while impressed, was slow to move.

“Tilapia are perfectly suited to this environment,” he says. “From birth to full-grown to market takes about six months.”

If there is an example of Haiti moving successfully forward into the future, Valentin Abe may be it. Staying focused, he has grown his aquaculture business in the same way nature grows a tree. Unlike the natural human desire to dig a hole and transplant a tree — come what may, for better or worse — Abe has approached the problem of fixing Haiti the way nature would: planting seeds and letting things sprout as they were intended. It’s a program that, so far, has worked spectacularly.

Starting with three, circular 12,000-gallon tanks on an acre of land southeast of the town of Croix-des-Bouquets and an hour by car from Port-au-Prince, he now has 36 tanks on the same amount of land. The galvanized steel tanks are models of efficient sustainability. Each tank’s water is oxygenated and stirred by solar and wind power. With 40 female fish and 30 males in the brood tanks, Abe says, you can get up to 10,000 babies each month.

“Then I have assistants who remove the babies from the tanks once a month,” he says. “They put them in their own tank. If you remove the babies, a female will have nine broods a year. If you leave them, she’ll have two to three" — he shrugs — “the maternal instinct. Then, if you feed the fry, they grow very quickly. They’re ready for sale in six months.” He pauses and shrugs again. “It's simple,” he says, “existing technology.”

He walks between tanks toward a four-foot tall cage. It has inch-wide, sealed PVC pipe supporting the corners and along the top and bottom. The cage’s roof, four walls and floor, are wrapped in green plastic screening.

“This is what we call the ‘six-week cage,’” he says. “At six weeks, we remove the babies from the ponds, and truck them to cages like this one, which we have on two lakes, one near here, and one up on the central plateau — about two hours from here. Four months later, they’re ready for sale.”

Abe says that once the fish are in the cages, the cages are divided among the local fishermen. The fishermen are also given a $60 bag of feed for the fish, and “From there, it’s easy. Feeding the fish is easy. Just three times a day.”

The food, he says, is clean: it’s 50 percent protein, plus soybeans, corn, a few other ingredients. “Unfortunately,” he adds, “right now we have to import it. Soon we hope to make it on our own, in our own facility. Anyway, with that first $60 bag of food, from the profits the farmer will make, the whole thing becomes self-sustaining for him after one round. After that, with the cash flow, it pays for itself.”

Let’s go to a fishing village, he suggests.

THE VILLAGE is about a 20 minute drive, down on the shores of 22,000-acre Lake Azuei. And as we drive, Abe holds forth on the beauties of growing tilapia, especially in Haiti. “The average Haitian eats seven pounds of fish a year,” he says. “The world average is 18 pounds. The Caribbean average is 35 pounds a year because of the islands all being surrounded by water. The problem is, in Haiti, the water for marine fish has been polluted and over-fished already.”

The village we’ll visit on Lake Azuei has 1,500 cages afloat, just offshore. As we approach, the cages appear loosely tethered to the bottom, and connected to one another in a submerged barge-like structure, so the cages won’t migrate in the wind. “Fifteen hundred cages is the maximum,” Abe says. “Any more than that, and the waste cannot be processed by the lake and it could become dirty.”

This concern for keeping the environment clean seems to be paying dividends. In 2010, they harvested 254,000 pounds of fish. In 2011, as of September (the last accounting), they had taken and sold 550,000 pounds. With these growing resources, Abe has other plans. He won’t expand too much, he says, but he wants to bring down some graduate students and set up a lab in the pond area. He wants to get a fish-processing station, to filet the whole fish, too “because the restaurants don’t really like to filet them themselves.”

As we approach the village — a barnacled cluster of huts whose walls are made of palm fronds and mud — children are playing soccer in the dusty road. Abe smiles. “I got them those soccer balls,” he says. “Everyone’s going to come out now, they’ve seen my truck.”

Later, he’ll talk about the scholarships his company gives to the kids these villages, though every day they have to walk the three and a half miles to the school in the larger neighboring town and then back home. “And I want to get them better housing. I’m starting to set that up. They work hard. They deserve it.”

Soon, we are standing at the lake’s edge and staring at the connected raft of cages. We’re also surrounded by fishermen. You can tell the families are all pretty happy. They have enough to eat. Good money. One fisherman, who is shirtless and appears to have just cleaned up for the night, walks over to me and points at the cages. “That’s good, right?” he says. He smiles.