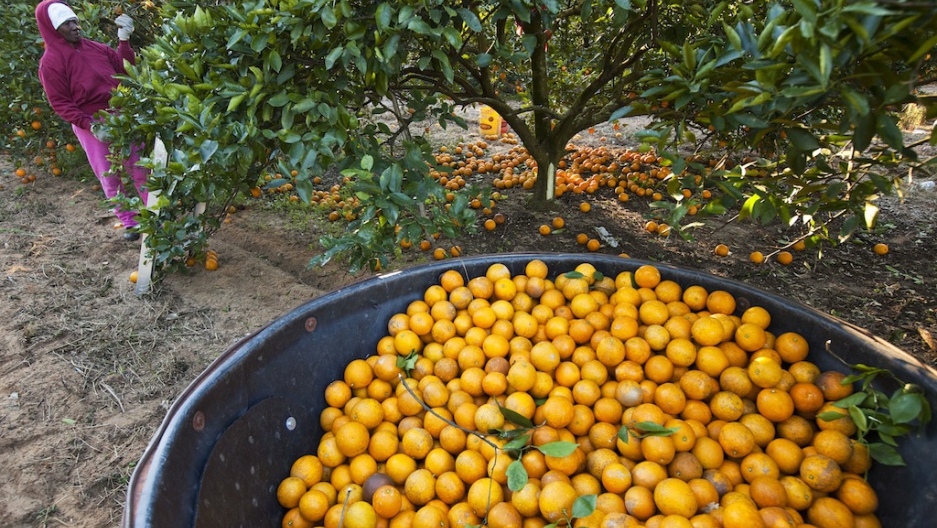 A worker picks oranges on a tree in a commercial grove January 11, 2010 near Winter Garden, Florida. Sub-freezing temperatures were present in the region throughout the weekend, endangering the citrus crop.
Credit: Matt Stroshane
Share

Cold weather in Florida and safety concerns in Brazil are driving the price of orange juice to a record high, the BBC reported.

The US Food and Drug Administration said low levels of carbendazim, a fungicide, has been found in shipments from Brazil, the world's largest producer of orange juice.

Carbendazim is banned in the US but still used in Brazil to treat black spot, a type of mould that grows on orange trees.

The FDA said in a letter published on its website:

"Consumption of carbendazim at the low levels that have been reported does not raise safety concerns."

Due to US regulations, the FDA has halted shipments of imported orange juice from all countries, and plans to destroy or ban products if tests find the low levels from the fungicide, Bloomberg reported.

Meanwhile, a few days of cold weather in Florida, including below zero temperatures, has led to icing that has damaged  local crops.

In Britain, orange juice has risen by about 25 percent this year to about $2.12 a pound, the BBC reported.

The orange juice market is not as large as other commodities so a relatively small volume of trading can suddenly trigger large price movements.