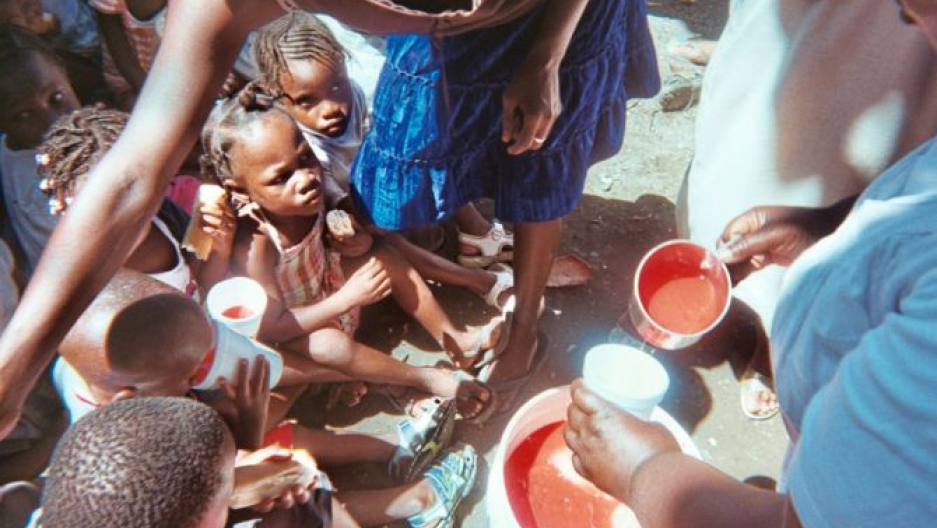 Children receive food and drink at a meal distribution site organized in La Pointe, a small town outside Port-de-Paix on Haiti's North Coast, by Ketlye Theodore and other volunteers. Theodore, 42, travels regularly to Haiti with donations and goods to offer direct support to the needy and poor.
Credit: Ketlye Theodore
Share

BOSTON — After returning from her annual trip to Haiti last July, Ketlye Theodore stood before a church congregation on a rainy Sunday to recount the misery she witnessed during her two-week stay. Her voice rose and dropped, punctuated with the amens of the crowd.

She spoke about the seemingly permanent post-earthquake tent housing, listless adults and children with nothing to eat, lacking the most basic necessities.

“If you go to Haiti, you’re going to cry every day,” she said later.

Each year, the 42-year-old nursing assistant spends hundreds of dollars on soap, toothpaste and other toiletries and collects bundles of clothing and shoe donations in preparation for the trip. Theodore said during these trips she also carries thousands of dollars in cash, held by safety pins in the folds of her undergarments.

Often, the money she gives away is her own but a few months before each trip she solicits small donations from friends, work colleagues and fellow members of the Haitian Church of the Nazarene, which she attends in Boston’s Mattapan neighborhood. Even five dollars goes a long way, said the mother of three, and people are usually happy to give. They’re happier still when she returns with pictures showing how their contribution was used.

Once Theodore arrives in Port-au-Prince, a pit stop on her way to her family’s home in Port-de-Paix on Haiti’s north coast, she converts the US dollars into the local gourde currency, separates the money into envelopes to distribute on the eve of her return.

The distribution is usually preceded by a huge meal of rice and chicken, spaghetti and bread that she organizes under a tarp in her grandfather’s yard for more than 300 people. “It’s a big job,” she said, but one she does willingly as part of her duty as a devout Christian.

Theodore welcomes orphans, families, the displaced and the homeless: basically anyone in need. All are welcome to join the worship service that accompanies the meal, usually led by a local pastor and filled with singing and prayer, an important part of the social fabric in a country where 80 percent of the people are Catholic.

“Since the earthquake, it’s getting worse in Haiti,” Theodore said in accented English. “When God asks you to do something, you do it, but you cannot change Haiti.”

Theodore’s account of the annual pilgrimage she has made since 1998 to feed stomachs and souls, which also includes visits to prisons and hospitals, is similar to that of many Haitians living abroad. But these trips, a staple of the more than 500,000 members of the Haitian diaspora in the US, have taken on more significance since the January 2010 earthquake.

More than a critical lifeline connecting Haitians abroad to the island, trips home now fill in some of the cracks where billions in aid donors pledged in the aftermath of the disaster have yet to reach two years later. A host of factors — ranging from Haitian bureaucracy to an ongoing cholera epidemic to lack of NGO coordination to hampered rubble removal — seem to stymie even the largest agencies even as they continue renewing their funding pledges.

Variations on Theodore’s story are familiar in the Haitian church community and so too are the warning tales. In November, the US State Department warned citizens traveling to Haiti about kidnappings, which numbered 12 in the last year along with 82 reported robberies, an improvement from the 60 reported kidnappings of US citizens in 2006.

The story of a Haitian-American woman on a church-affiliated trip who was robbed, kidnapped and held for ransom circulated widely among churches in Boston this summer. And although her mother and brother confirmed the kidnapping reports, the woman declined an interview request by GlobalPost, citing the trauma she’d experienced as well as the ongoing investigation.

Even Theodore said the desperation was palpable when she last visited. Violent fights broke out during the food distribution. On her next trip, she plans to contact the police for help beforehand. “If someone gets hurt, it will be my responsibility,” she said.

Not everyone agrees these piecemeal efforts make the kind of difference necessary to rebuild a country devastated by the 7.0-magnitude quake that leveled whole swaths of it.

“That’s not what Haiti needs now,” said Wladimir Louis-Charles, a physician and healthcare consultant from New York who has traveled regularly to Haiti to treat earthquake survivors. “Haiti needs a diaspora that says, ‘I’m going to work and change things.’”

While acknowledging the good that comes from the nearly $2 billion US dollars annually in formal and informal remittances that diaspora Haitians contribute to the island, according to the World Bank’s estimation, Louis-Charles was critical of disaster tourists who “arrive on Wednesday and leave on Monday” under the guise of doing charity work. People need to come and stay awhile, he said.

He expressed dismay that so little had changed on the ground after so many promises. If anything, there seemed to be less sense of urgency among relief workers and more sense of resignation and acceptance of their fate among quake victims, Louis-Charles said.

“They get used to the talk, the visits, the photo shoots but they know nothing is going to come from that,” he said of the patients he meets in various hospitals, clinics and campsites. “Many people ultimately say to themselves, ‘this is the fact, this is where I’m going to stay and this is my life,’” he said.

Haitians abroad seem to be adjusting their focus as well. At a community meeting in Boston this summer, the burning topic was the temporary protected immigration status afforded some Haitians who were allowed to enter the United States after the quake. The conversations alternated between the concerns of those too afraid to renew their paperwork out of fear of being sent back and those who championed filing before the deadline, seeking jobs and financially benefitting families back home.

And in New York, at a brainstorming session of Haitian-American activists that included a philanthropist, community organizers and aid organization workers, the debate centered on generating a list of priorities for Haiti, like education, infrastructure and governance and the best way to lobby policy makers for reconstruction financial transparency, for example. Similar meetings as part of a listening tour were taking place around the country, the group said.

But despite the slow pace on the ground, some like Ivens Louius, a physical therapist, remain active and optimistic, believing it is their duty to get their country back on its feet, with or without international help. “We have to bring what we can to the country,” he said.

Louius, 28, spent the first days after the catastrophe watching streams of homeless quake victims with crushed limbs and open wounds stagger into the Dominican Republic rehabilitation center where he was working at the time, their plight compounded by their inability to speak Spanish.

At first, he worked with international specialists to mend broken bones but in little time he decided his country needed its own center to treat such vulnerable victims, especially since disability means exclusion from society. “In Haiti ... having a disability means that life is over,” he said.

On a shoestring budget garnered from contributions from a small group of founders, he established Fonhare, a rehabilitation center on Haiti’s north coast that has treated more than 360 patients — regardless of their ability to pay — since opening in July. To be treated there, some travel from as far away as the capital of Port-au-Prince, a seven-hour bus journey.

“How could people live in a situation like that?” is what Freau Lamonge found himself asking when he visited his homeland last summer for the first time since the quake.

Though recent announcements of free education for all Haitian children, that “Haiti was open for business,” and investment projects for bringing factory jobs as well as a Marriott Hotel endorsed by Bill Clinton were heartening, he worried these would remain unfulfilled promises again.

“There is not a plan,” Lamonge said. “We’re trying to push the economy, but with what are we pushing the economy?

“It’s like when someone has a fever and you only treat the symptom,” he said. “Fever is only a symptom.”