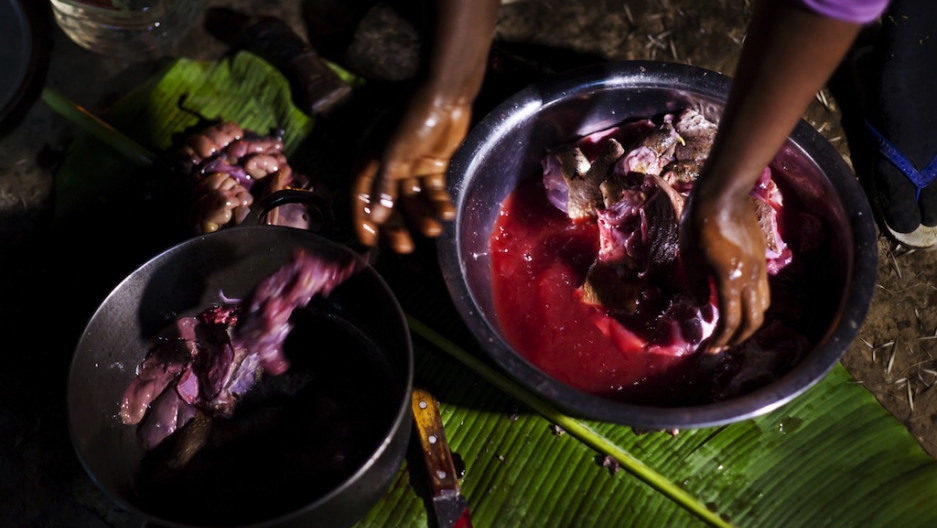 A woman prepares a porcupine for the pot in a small Cameroonian village close to Nyabissam, July 27, 2011. This woman risks the transmission of animal disease pathogens to her own body during the bloody preparation process. Any cuts on her hands or arms could see a transmission of disease from the animal to her, a fact that many consumers of bushmeat are unaware.
Credit: Brent Stirton
Share

BOSTON — Billions of animals come into the United States every decade, but few of them are ever tested for disease. That is worrisome, if the results of a scientific study published Tuesday are any guide.

Scientists took random samples from "bushmeat," meat from African wild animals, and found evidence of numerous diseases including a nonhuman form of herpes.

"Scientists estimate that some 75 percent of emerging infectious diseases affecting people have come from contact with wildlife," the BBC reported. "Some of this is the result of animals biting humans, but the handling and consumption of infected meats is also considered a significant route of transmission."

The infected meat originated in Guinea, Nigeria, and Liberia, and was destined for locations as disparate as Staten Island, Philadelphia, and Dallas. But it came through a single point of entry: New York City's JFK Airport in Queens.

"Hunting and butchering of bushmeat ... has been increasingly recognized as a source of disease emergence," the scientists wrote in the study, "Zoonotic Viruses Associated with Illegally Imported Wildlife Products," which was conducted in conjunction with the CDC and was published in the journal PLoS ONE.

The authors noted numerous viruses, including SARS, emerged as a result of "trade in live animals and animal products."

Time Magazine's EcoCentric blog noted the dangers that could be posed by the threats indicated in this pilot study: "Think SARS, avian flu, swine flu, Ebola — all of them began in animals before somehow mutating and spreading to people."