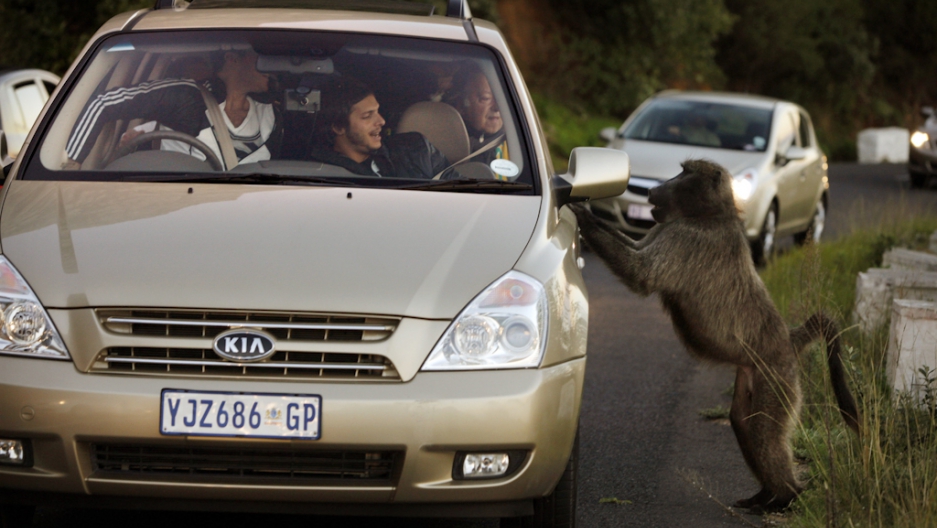 A male baboon jumps up on a car in Cape Town, South Africa as tourists react after they fed him an orange. Urbanization is believed to be the main reason for the loss of the natural baboon habitat and increasing conflict between baboons and humans. Baboons are seen as a menace while they forage for food in an urban environment breaking into restaurants, garbage cans, where ever food is visible.
Credit: Paula Bronstein
Share

JOHANNESBURG, South Africa — Fred the baboon was the scourge of Cape Town, stealing food from cars and houses, and terrorizing tourists — despite having been shot more than 50 times, according to a new documentary.

Fred the "mugger" baboon was captured and killed last year by city officials worried about his aggression, which was fueled by tourists feeding him. The alpha male baboon had bitten several people, and knew how to open car doors and unzip bags.

Some residents had fought to save his life, and even followed the vehicle in which a caged Fred was taken to be euthanized by lethal injection at a vet's office, South Africa's Independent newspaper reported.

His post mortem was captured on camera for a documentary by the UK's Channel 4, to be aired tonight in Britain.

X-ray pictures revealed how Fred had been shot more than 50 times, his head and body riddled with bullets and shotgun pellets, the UK's Press Association reported.

Despite this, he had continued his "reign of terror," according to the Daily Mail.

Veterinarian Mark Evans, host of the documentary "Rogue Baboon: An Inside Nature's Giants Special," said Fred could 'bite like a lion...run like a cheetah...and rule his troop like a despotic emperor," the Press Association reported.

The animal behaved like "the most notorious gangsters," Evans said, adding: "Fred became very protective of his patch — anyone standing in his way faced intimidation and violence."

Some 400 chacma baboons roam the outskirts of Cape Town, in particular the scenic route past Simon's Town to the Cape of Good Hope. The animals have long lived in the area but development and habitat loss has brought them into increasingly close contact with humans.

Other animals have taken to "baboon-jacking" unsuspecting tourists who fail to look their car doors, stealing their handbags and snacks.