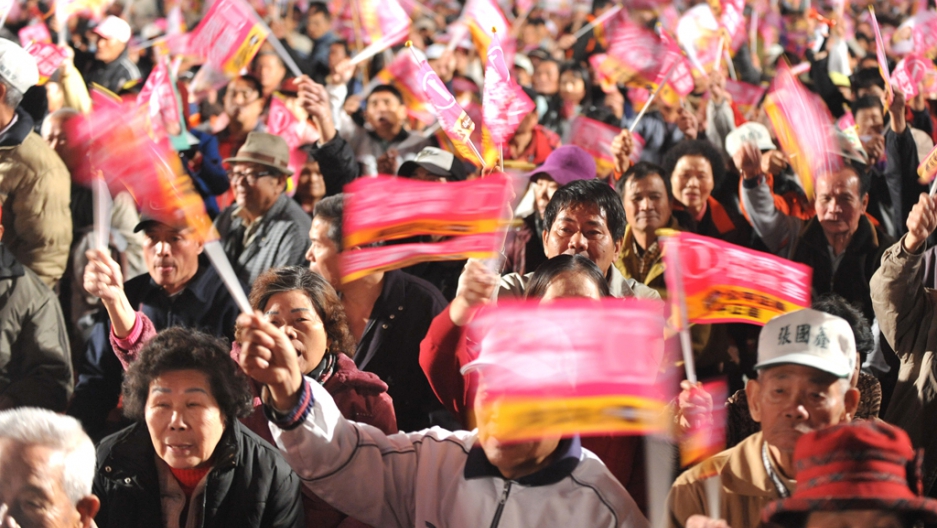 He’d listened long enough to consumer-rights advocate Liu Ting-ting defend her position on the need for cheap power for the island's low-income earners.

"Are you crazy? Who cares if power goes up? If we have another Fukushima, where will we go? Taiwan is only 300 km long. How much will evacuating the entire country cost?” said Chen, a computer programmer by day, and committed anti-nuclear and environmental activist by night.

The pair were at an activists' open platform at a west Taipei cafe to discuss Taiwan’s upcoming presidential election and how cracks in the frontrunners’ poll numbers could lead to inroads for their prospective causes.

Activists might not always have the same idea about what's best for Taiwan, but what they do have in common prior to Jan. 14 polls is that they have benefited by the uncharacteristically tight race between leading candidates.

Most polls have either Ma or Democratic Progressive Party Chairwoman Tsai Ing-wen ahead just barely at this point. Analysts predict the race will be won on the margins, and away from the traditional voter bloc dividing line of north-south and rich-poor — circumstances that have helped propel the country's burgeoning activist community from the political fringes to center stage.

Why the climate is right for activists

Incumbent nationalist President Ma Ying-jou faces the real possibility of becoming the first sitting head of state to lose a bid for a second term since free elections were first held on this diplomatically isolated island 180 km off China's southern coast in 1998.

His main competition is Tsai, educated at the London School of Economics, though matters have been complicated by a third candidate, James Soong, of the People First Party. Analysts say Soong could tip the scales toward Tsai by siphoning off votes from Ma.

Over the course of election season, both Ma and Tsai have gone through the usual motions of accusations, counter accusations, lawsuits and counter lawsuits about their alleged ties to corruption, gangsters and nepotism.

But what was different this time around was the amount of time both Ma and Tsai, who would become the first female head of state of any modern Chinese society if elected, spent on stumping for support from environmentalists, women, gay and transgender people, aboriginals and anti-nuke groups.

More from GlobalPost: Taiwan gays prouder than ever

"In recent years there has been a surge in the number of young people getting involved in social issues. The majority of them are creative college graduates who have been adept at getting their messages out through social media. The politicians are being forced to act more than ever before and are feeling greater pressure from these platforms,” said Iaya Hsu, project coordinator Green Citizen’s Action Alliance.

"The public also has a greater awareness of what's going on and the problems we face.”

So far, those pleas for support have resulted in concrete wins for the activism community.

Both candidates have unveiled energy plans that either scrap nuclear power or greatly reduce the island's reliance on it by 2025. Major industrial polluters until recently operated largely unimpeded by environmental protection laws, protected by Taipei's desire to stem the tide of job losses from companies fleeing to energy-hungry China.

Lately, several companies been fined, had their operations suspended or in the case of the proposed $21 billion Kuokuang petrochemical complex, which was supposed to be housed in the middle of Taiwan's largest wetlands, been scrapped all together.

Environmentalists have been offered stricter restrictions on Taiwan's industrial and electronics businesses, which make up the backbone of the economy.

Gay and transgender groups have been promised stricter anti-discrimination laws. Even the island's sex workers were buoyed with a recent decision to decriminalize prostitution in select areas.

However, some activists have warned voters to keep the pressure on the eventual winner to ensure that the raft of pledges are met.

"Recently there has been a noticeable uptick in activity due to the election. But we have to remember that politicians have used distorted information on issues such as nuclear power generation in the past to back out of earlier promises. While we are happy to see candidates say these things, we aren't entirely sure they will honor all of their commitments,” said Gloria Hsu of the Taiwan Environment Protection Union.

This year's election has been complicated by former nationalist Kuomintang (KMT) insider James Soong, who split the KMT vote in 2000 when he handed the election to the DPP's first elected president, Chen Shui-bien. Chen is currently serving a lengthy jail term for corruption.

Soong, who heads the People First Party, and was ironically a former champion of the economic development at all costs approach to governance as a former KMT premier, is siphoning votes from Ma and could tip the scales toward Tsai as a result. In the process, he's providing a tailwind for activists down the home stretch.

"I would say the government’s thinking hasn’t really changed. They're still pro big business. It’s the public that is pressuring them to change. So right now, we are using this election to ask them to answer the questions we have on the table. To pressure them to be open and commit to the issues," said Pan Han-shen, co-founder and spokesman of Green Party Taiwan.

"In Taiwan, we talk a lot about our differences with China and how the international community should recognize those differences. Well, this is one way that we can open another window to the world."