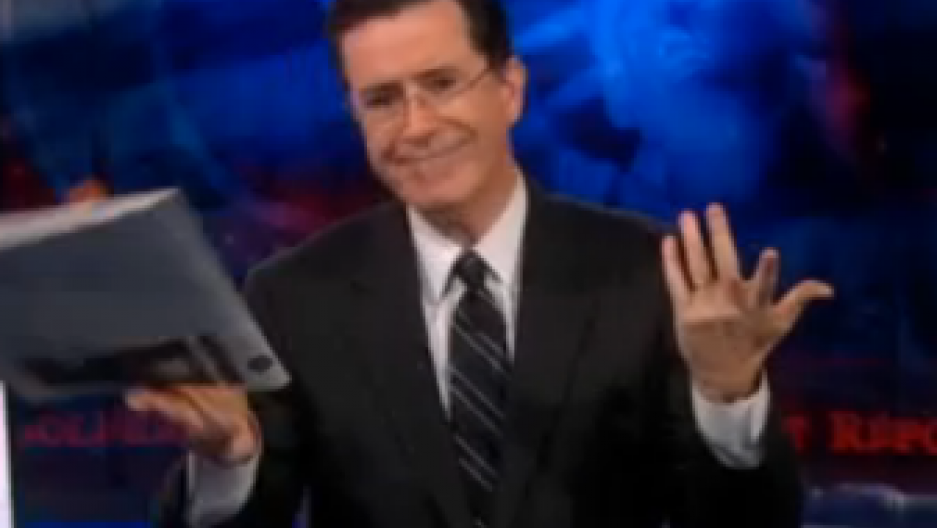 Stephen Colbert tried to use his Super PAC to acquire naming rights to the South Carolina GOP primary. Most Super PACs, however, have been used to run attack ads against other political candidates. (Photo from Comedy Central video.)

Stephen Colbert has one. So do supporters of Mitt Romney. And Newt Gingrich.

We're talking about Super PACs, of course, those new creations of the vagaries of American campaign finance law that allow for virtually unlimited spending and unlimited contributions on behalf of a political issue. The only major limit on Super PACs is they can't coordinate their message and their spending with a particular political candidate. But that doesn't seem to be hurting Romney, nor Gingrich, who have both enjoyed seeing these "independent" Super PACs go at their opponent with alacrity.

They've had a major impact on the Republican primary. For example, ads run by pro-Romney Super PAC "Restore Our Future" are widely credited with reversing Newt Gingrich's lead in Iowa. Gingirch, who was incensed by those ads and confronted Romney about them at a debate, has his Super PACs of his own.

A pro-Gingrich Super PAC is poised to air a 20-minute "documentary" on Romney, portraying him as a villainous corporate raider, based on his days at Bain Capital.

We can thank the U.S. Supreme Court's 2010 Citizens United ruling for bringing these Super PACs to like.

Kathleen Hall Jamieson, director of the Annenberg Public Policy Center at the University of Pennsylvania, said that it's not hard to believe that the Super PACs and candidates really aren't coordinating activities. So long as they're working toward the same objective, have access to the same polling data and are asking similar questions, it only makes sense that their activities would dovetail together. Even without any overt coordination.

"These are often individuals who in the past worked with the candidate, they just stopped doing it and the point they formed the Super PAC," Jamieson said. "It doesn't take much to figure out what message, would advantage a certain candidate and strongly disadvantage another. You don't actually have to talk to them to figure that out."

Jamieson said that PACs and their negative ads have been around for years, but what's changed now is the introduction of practically unlimited funding from individuals, corporations and unions.

"In general, when third parties come in, the content is more attack-driven and the accuracy level is lower," Jamieson said. "The accountability, directly tagging that content back to the candidate, is more difficult for the media to do."

There's a side benefit to the Super PACs, Jamieson said. A lot of their content is getting into news, and it's not just the accurate parts of the ads that are being played.

"As news tries to cover the story, it faces the dilemma of how do you do that without airing any of the content, thereby advantaging the side with more money and also, airing deceptive content," Jamieson said.

As for Colbert's Super PAC, so far it's been mostly a source of mischief. Colbert was set to pay the party and the counties $400,000 from his Super PAC to fund the election, in exchange for naming rights to the debate and the right to put a non-binding referendum on the ballot:

In order to address the issue of Corporate Personhood, the enfranchised People of the Sovereign State of South Carolina declare that: Corporations are people or Only people are people. The Republican Party had agreed on both fronts.

A state supreme court ruling, however, overruled the party and state officials who'd insisted that the party bear the costs of the elections. According to the court, counties must pay for the elections. And they're not selling the naming rights to Colbert.