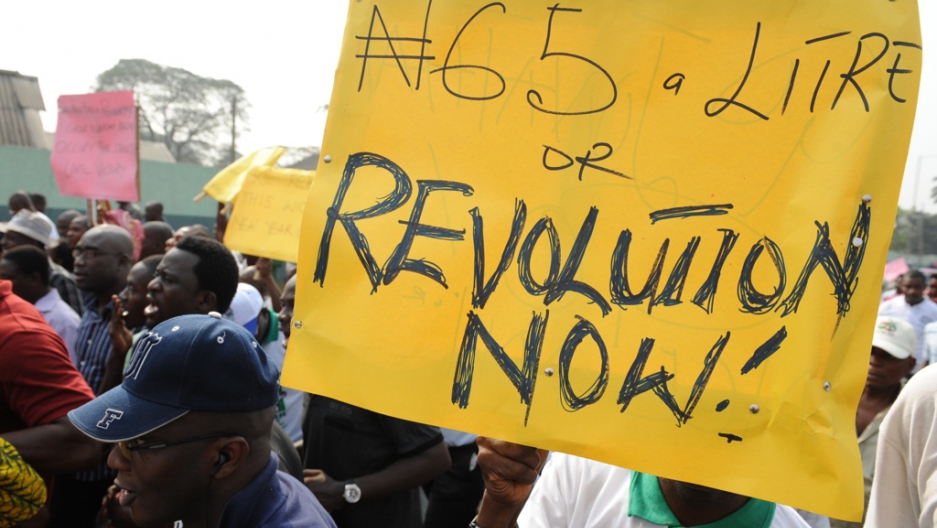 Nigerian union members and demonstrators march in Lagos to protest the removal of petroleum subsidies by the government on January 3, 2012. Nigerian police fired tear gas to disperse a small crowd burning tires in Lagos and arrested demonstrators in the northern city of Kano on Tuesday as protests continued over soaring fuel prices.
Credit: Pius Utomi Ekpei
Share

Over the weekend, Nigerian President Goodluck Johnathan said the violence that has erupted from Islamist militant group Boko Haram, is the gravest threat since the civil war in 1967 to 1970 that left as many as 3 million people dead, and nearly ripped the country apart, according to Agence France Presse.

"During the civil war we knew and we could even predict where the enemy was coming from. But the challenge we have today is more complicated," Jonathan said, according to The Guardian. The president said some Boko Haram supporters even work for the government.

As the Nigerian government attempts to counter this threat, however, the country appears to be descending into chaos. On the first of this year, the president announced an end to government-sponsored fuel subsidies, doubling and tripling the price of gas in a matter of days.

The reaction of the people was swift, as people took to the streets in opposition to the move almost immediately. Yesterday, schools, banks and stores were shuttered, as protests and a general strike swept the nation after an emergency court banned the demonstrations on Sunday, according to Bloomberg News.

The BBC reports at least three people were killed and more than 30 injured in the protests, that drew tens of thousands of people, and are scheduled to continue indefinitely.

CNN reports a higher death toll, citing at least five reported deaths. Hadiza Halliru, an Abuja protester told the broadcaster that soaring fuel prices have caused an increase in the costs of everything from food to school fees. In Nigeria, more than 90 percent of the people live on less than $2 a day.

"The fuel hike, which has doubled and even tripled in some states, would affect not only transportation but the price of foodstuff, clothing, any form of direct labor, construction costs,” he told CNN. “But salaries still remain the same, which means everyone who directly pays bills will be affected, especially the middle class and the poor."

In a photo on the Voice of America website, one man carries a placard that reads: “One day the poor will have nothing to eat but the rich.”

The fuel subsidy cost the government $8 billion in 2011, and some argue it never really helped the average Nigerian person get ahead. Critics of the subsidy say it filtered large amounts of money into the hands of the few, leaving the country with very little in the way of infrastructure development.

As the debate over the subsidy raged last fall, a Nigerian Tribune editorial hailed local leaders for standing up to the people profiting from the subsidy. The author, Joshua Ocheja, writes:

“We can’t sit and watch while an infinitesimal percentage of the population milk us dry in the name of fuel subsidy … It is high time we called a spade a spade in this country. Our elected officials must account for their actions and inactions as it concerns the populace.”