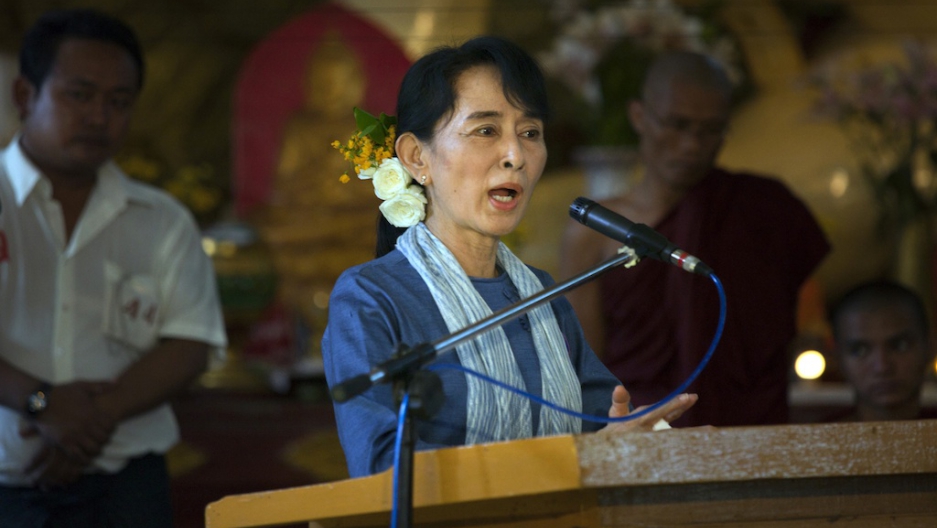 Democracy leader Aung San Suu Kyi speaks during 20th anniversary ceremonies to honor her winning the Nobel Peace prize December 10, 2011 in Yangon, Myanmar. The pace of change in Myanmar brought U.S Secretary of State Hillary Clinton to the country where she discussed further paths to reform and crucial talks with both Aung San Suu Kyi and the highest levels of the Burmese government.
Credit: Paula Bronstein
Share

A National League for Democracy party spokesman told reporters that Suu Kyi would seek one of the 48 vacant seats made available from the parliamentary election in November 2010. At that time, many members were appointed cabinet jobs.

Last week Burma's government approved the participation of the NLD, which formally registered as a party in December after being removed from the list of approved parties when it boycotted the general election. It called the electoral rules unfair, partly because they excluded Suu Kyi as a candidate.

The National League for Democracy party's decision to rejoin electoral politics comes amid signs that the new government is easing years of repression, reported the BBC.

Authorities released Suu Kyi in 2010 after years of house arrest and freed dozens of political prisoners in October 2011.

The most notable sign of the nation's process toward improved relations with the West is Secretary of State Hillary Clinton's recent trip to Burma — also known as Myanmar — during which she met one-on-one with Suu Kyi. Clinton is the highest-ranking US official to visit in more than a half-century.

More from GlobalPost: US to Burma: reforms must continue

US diplomats will meet again with the Burmese opposition leader this week in another sign of thawing relations between Washington and the Southeast Asian nation, reported CNN.

NLD spokesman Thein Oo told CNN that an American delegation, including Derek Mitchell, the US special envoy to Burma, is scheduled to meet with Suu Kyi on Thursday.

Myanmar has been ruled by a military junta since 1962, and the generals have started to loosen their grip on the country after coming under criticism for their human rights record in recent years. Thein Sein, a former military official and prime minister, became president last year as a result of an election criticized by democracy activists as a sham.

At a recent news conference Suu Kyi said she would not endorse the US or Europe lifting economic sanctions on Burma unless there were “free and fair by-elections.” She also called for other reforms including the release of political prisoners and efforts to end long-running armed conflicts with ethnic groups.

A few days ago, the Associated Press interviewed Suu Kyi, and she indicated her concerns that the Burmese army could block reforms. Check out the video below: