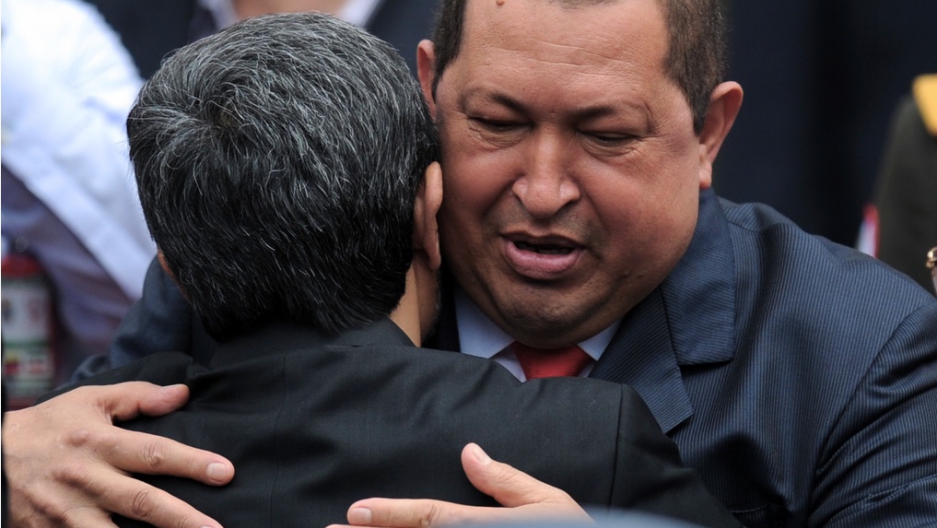 Iranian President Mahmoud Ahmadinejad has been having a time on his Latin American tour.

The trip, ostensibly to shore up business ties with countries in the region, also could be read as a not-so-subtle power-play in the US's backyard, just as the US and Iran are becoming increasingly confrontational over Iran's nuclear ambitions.

Ahmadinejad skipped the region's largest economy, Brazil, and Mexico, in favor of some less democratic leaders and to stop in on Venezuela's president and regional firebrand, Hugo Chavez.

According to the AP, Chavez and Ahmadinejad gave a jovial interview that revolved around Iran's nuclear plans, in the wake of a finding by the International Atomic Energy Agency, the UN nuclear watchdog, confirming that Iran had enriched uranium. Iran continues to maintain that it wants nuclear power for civilian power-generation, but the US, the EU and Israel disagree.

Ahmadinejad took the issue lightly on Tuesday. Per the AP:

"They say we're making (a) bomb," the Iranian leader said through an interpreter. "Fortunately, the majority of Latin American countries are alert. Everyone knows that those words ... are a joke. It's something to laugh at."

"It's clear they're afraid of our development," Ahmadinejad said. ...Ahmadinejad said if they were together building anything like a bomb, "the fuel of that bomb is love."

Ahmadinejad and Chavez have a warm relationship, founded in part on their status as pariahs in the West and their own aversion to the US. (Though Chavez isn't the only leader Ahmadinejad has embraced, according to the photos above.) Said Chavez:

"When we devils get together ... it's like they go crazy," Chavez said. Laughing, Chavez said Ahmadinejad is traveling through "the axis of evil of Latin America."

Next stop on the axis Tuesday was Nicaragua, to attend the inauguration of President Daniel Ortega. We can probably expect at least a few more bombs of love to drop on this tour, as the Iranian leader also has plans to visit Ecuador and Cuba.