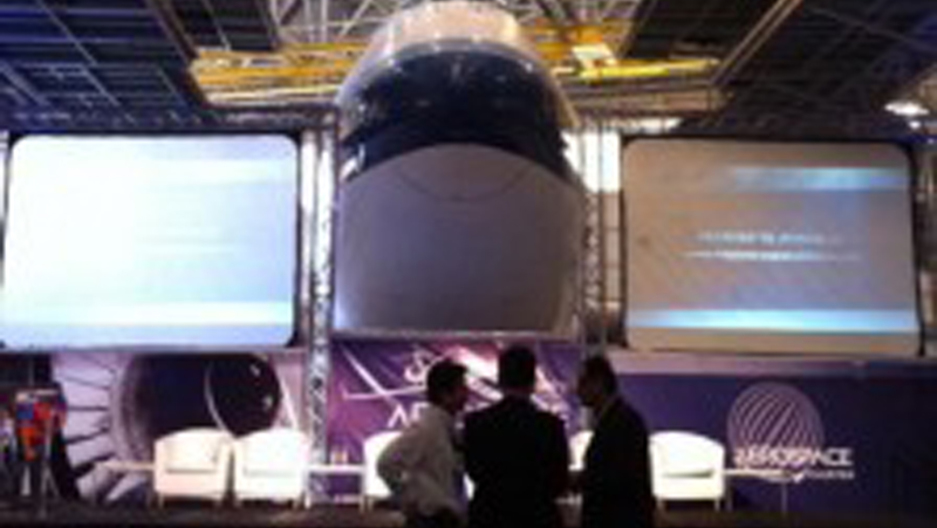 Mexican and American executives meet after a presentation at the Baja Aero Space Show in Tijuana. (Photo by Ruxandra Guidi.)

The Maquiladora industry along the Mexican border is on the rebound.

These largely US-owned manufacturers suffered a double whammy over the past decade; competition from Asia drew factories across the Pacific, and then the U.S. economy lurched into recession.

But now, rising wages in China and a resurgent American auto industry are breathing new life into the maquilas in Tijuana. The aerospace industry is leading a resurgence in growth among border businesses.

“People’s perception about what cross-border manufacturing, what maquiladoras are like, is still based upon what was happening in the 70s and maybe the 1980s,” said Kenn Morris, president of Crossborder Group, a San Diego-based market research firm.

Morris said the aerospace industry along Mexico’s northwestern border is nothing like overcrowded, low-skill factories that people usually think of when they think of maquilas.

“A lot of the factories, they’re building in such a way these days, and they’re managed in such a way, that they can be put anywhere on the planet. But they’re coming to Mexico,” he said, specifically citing medical devices, aerospace and electronics industries.0

In the past five to 10 years, more than 50 aerospace and defense companies have started operations in Baja California, according to Mexico’s trade ministry. Most of them are American, and they produce everything from electronic components to steel bolts for commercial and military aircraft.

These companies employ more than 10,000 high-tech workers, many of them engineers, technicians and software developers. The companies chose this region for its proximity to the U.S. and to western ports catering to Asian markets.

But the main reason they come here is simple: the cost of even highly skilled labor in the area is roughly half of what it is in the United States. In San Diego, a senior aerospace engineer makes on average $90,000 per year. In Tijuana, an engineer with similar skills earns $35,000 to $45,000.

Cobham, which produces defense systems, made the move to Tijuana in 1997 — practically a pioneer among defense contractors. Inside its factory, workers dressed in royal blue coveralls sit in groups, looking into microscopes, holding tiny tweezers.

“Over here we do the tuning and testing of the product,” said Javier Urquizo, a plant manager at Cobham.

But Urquizo won't say exactly what the product is. That’s classified information.

“So after we finalize the assembly, we need to tweak around some components to get the electrical responses required on the different frequencies,” he said.

The company had to apply for special licenses from the State Department to build those components here in Mexico — that’s to make sure the raw materials and parts and the technology don’t get into the wrong hands.

Teresa Jesus Rio Ramos, a production supervisor here, said aerospace and defense companies offer the most stable, best paying jobs of all the Tijuana maquilas. She makes about $1,800 a month.

“I think our company is pretty financially stable,” she said, “I don’t have to worry from month to month whether I’ll have a job or not. But that’s not true for all maquilas in Tijuana. People get fired and rehired elsewhere all the time.”

When asked whether she’d prefer working on the other side of the border, where she could potentially double her salary, Rio Ramos shook her head.

"I’ve gotten a lot of professional training here in Tijuana," she said. "I’m not interested in changing the course of my story."