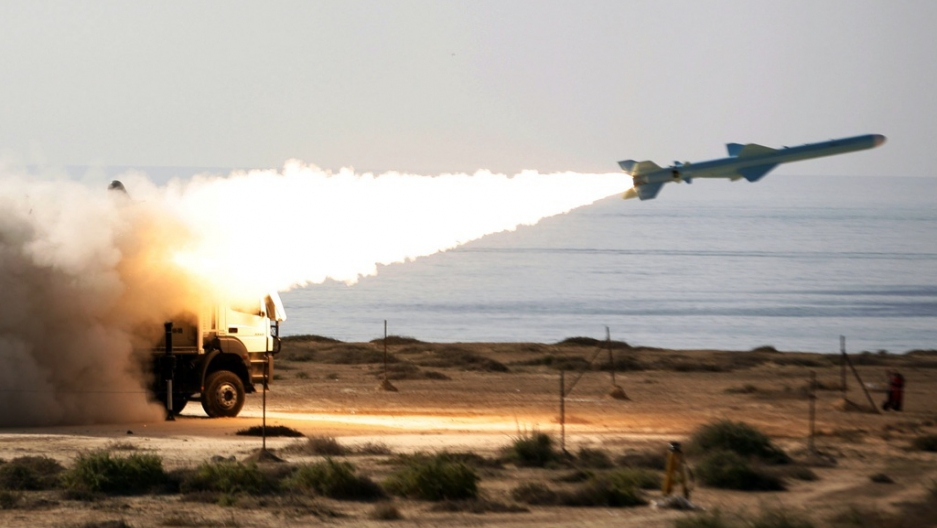 Iran's 120-mile range Qader ground-to-sea missile is launched on the last day of navy war games near the Strait of Hormuz in southern Iran on January 2, 2012. The war games took place at a time of increased tensions between Iran and the United States and other Western powers.
Credit: Ebrahim Noroozi
Share

TEHRAN, Iran — An escalation in war rhetoric in recent weeks, coupled with increasingly punitive measures taken by the US and Europe against Iran’s ability to do business with the rest of the world, is wreaking havoc on the Iranian economy.

Each day brings new price hikes as confidence in the Iranian currency, the rial, diminishes dramatically.

“It’s bad for us, too. In the past, Iran produced everything we needed. Now we don’t even grow enough rice,” said Hamed, who runs his family’s market in central Tehran. “We have to pay more to import goods for our customers. Unfortunately that means higher prices.”

In the week since US President Barack Obama signed new legislation that included provisions to impose trade sanctions on Iran’s central bank, which would in effect cut it off completely from the global banking system, there is a heightened sense of concern that the country may be on a path to confrontation with Western powers, including the US and Israel.

The increased tension has led to a crisis in Iran's currency market, stemming from a major buy-up of gold and foreign currency. Iran’s government claims to have overflowing reserves of both, but the public is not convinced.

Since Jan. 1, the rial has been on an up and down (mostly down) rollercoaster ride, that has seen its value drop from 13,000 rial to the dollar in mid-December, to 16,500 to the dollar on Sunday.

Due to the rial’s dramatic fall, businesses dealing in small volumes of high-priced imported goods, especially electronics, have resorted to quoting prices in dollars and euros, rather than continually raising the rial prices.

Iran’s important tourism sector has been hit hard, especially the sale of outbound tours to places like Istanbul and Dubai, which have all but disappeared.

“I really can’t do anything,” said Vahid, who runs a travel agency. “The phones have completely stopped ringing.”

Like many he is concerned not only about the potential for war, but also with his ability to keep his business afloat under the onslaught of sanctions.

Quietly though, some in Iran’s capital are doing quite well, even profiting from the speculation in currency. This sliver of uber-wealthy, who live in a world detached from the everyday struggles of most Iranians, drive special edition Porsches, Toyota Land Cruisers and Mercedes through the winding alleyways of northern Tehran, pumping deafening Western music.

The Iranian regime of Mahmoud Ahmadinejad has remained defiant, threatening to block access to the Strait of Hormuz, one of the world’s most important oil passageways, if Europe and the US impose embargoes on Iran’s oil exports. While this would likely see the global price of oil skyrocket, most analysts agree it would be most harmful to Iran, as it would could cut off their own primary source of income.

“If enemies block the export of our oil, we won't allow a drop of oil to pass through the Strait of Hormuz. This is the strategy of the Islamic Republic in countering such threats,” warned Deputy Commander of Iran’s Revolutionary Guard, Ali Ashraf Nouri, to a local newspaper Sunday.

For regular Iranians, the talk of war has triggered their well-documented sense of nationalistic pride, whether they support the current government or not.

“If we’re attacked, whether by the US or Israel, or anyone else, we’ll fight,” said Fatemeh, a housewife and mother, adding, “Not for the Islamic Republic, but for our homeland.”

Iran has signaled a willingness to return to nuclear negotiations with major powers, perhaps sensing even bleaker times on the horizon if the sanctions continue.

But in an example of the very mixed messages coming from the Islamic Republic, officials announced over the weekend that one of its underground nuclear facilities had begun enriching uranium.

In a rare instance of goodwill between the two countries, an American aircraft carrier — the USS John C. Stennis — rescued 13 Iranian fishermen who had been captives of Somali pirates.

Even more surprising than the rescue was Iran’s official response.

"We consider the actions of the US forces in saving the lives of the Iranian seamen to be a humanitarian and positive act, and we welcome such behavior," Iranian Foreign Ministry spokesman Ramin Mehmanparast told state television’s Al Alam Arabic channel Saturday. "We think all nations should display such behavior."