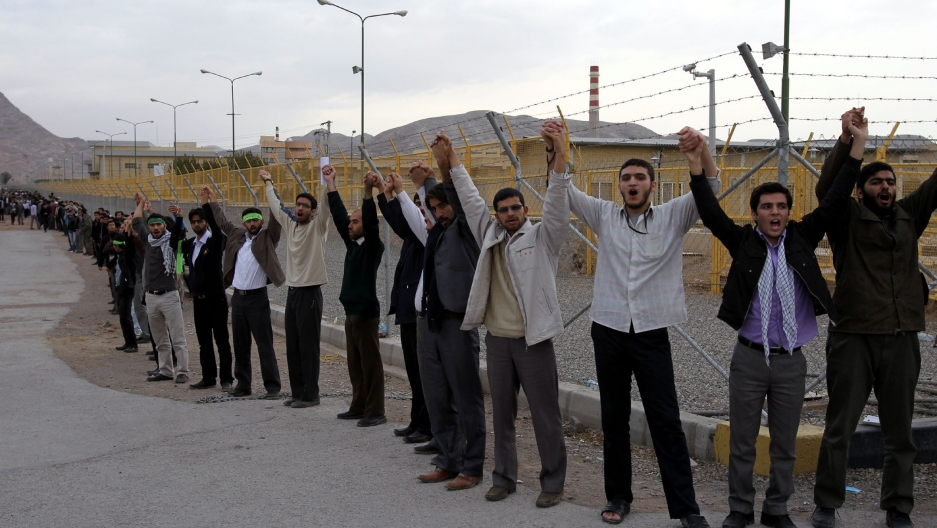 Iranian students shout slogans as they form a human chain outside the Isfahan Uranium Conversion Facility during a protest in the city in support of Iran's nuclear program and against military threats by Israel on Nov. 15, 2011.
Credit: -
Share

Officials at the International Atomic Energy Agency, the United Nations’ nuclear watchdog, confirmed today that Iran has begun enriching uranium at an underground facility near the city of Qom.

“The IAEA can confirm that Iran has started the production of uranium enriched up to 20 percent in U-235 using IR-1 centrifuges in the Fordow Fuel Enrichment Plant,” IAEA spokesman Gill Tudor said in an e-mail, according to Bloomberg Businessweek. “All nuclear material in the facility remains under the agency’s containment and surveillance.”

While Iran has insisted that its scientists are developing nuclear energy for peaceful purposes, Nuland said that the country’s new enrichment operations tell a different story. “When you enrich to 20 percent there’s no possible use if you’re talking about a peaceful purpose,” Nuland said, according to Bloomberg Businessweek. “You’re enriching to a level that takes you to a different kind of nuclear program.”

"The Islamic establishment... knows firmly what it is doing and has chosen its path and will stay the course," Iran's Supreme Leader Ayatollah Ali Khamenei said today in a speech broadcast on state television, BBC News reported.

According to the Christian Science Monitor:

The Iranians may have announced the Fardo enrichment as a means of underscoring the urgency of restarting nuclear talks, some Iran analysts say. But they add that the intensifying brinkmanship on each side could also make chances of a return to diplomacy that much more remote.