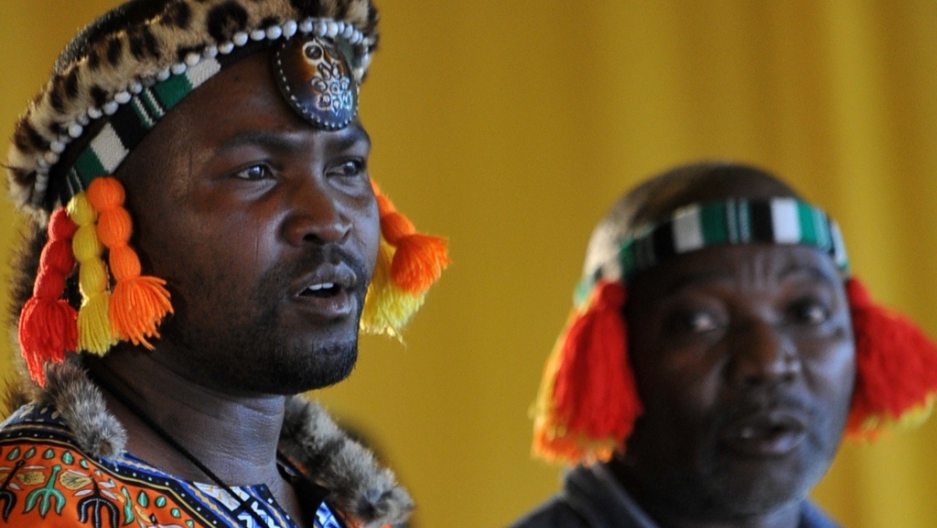 People celebrating the 100th anniversary of the African National Congress (ANC) party which was founded on January 8, 1912. South Africa's ruling ANC on January 6 began celebrations for its centenary, still firmly at the helm of Nelson Mandela's all-race democracy despite losing some of its shine.
Credit: Alexander Joe
Share

JOHANNESBURG, South Africa – To kick off its 100th anniversary celebrations, South Africa’s liberation party orchestrated the slaying of a bull, an African ritual to invoke the spirits of ancestors.

Posing for photographers with spear in hand, President Jacob Zuma said he would leave the actual stabbing of the bull — which had spent Saturday morning tied to a tree in a makeshift corral — to younger men.

But perhaps more symbolic of the current African National Congress was another ritual at the start of its anniversary weekend: a golf tournament.

Golf is a favored sport of the affluent ANC members who have been widely criticized for corruption and flashy lifestyles.

"It might have been elite before, during apartheid when it was a whites-only sport that we weren't allowed to play. Now the ANC is embracing all sporting codes,” Mthembu told the South African Press Association.

"Golf is a good sport. We should have golf courses everywhere just like we have soccer fields."

Most ordinary ANC members weren’t on the golf course. An estimated 100,000 of them are attending celebrations this weekend in Bloemfontein, now also called Mangaung, including 46 heads of states and dignitaries such as Archbishop Desmond Tutu and the Reverend Jesse Jackson.

Nelson Mandela, 93, who hasn’t appeared in public since the 2010 soccer World Cup, “is in good spirits but very, very old,” and will not be attending the centenary, a spokesman said.

Events are largely set around the Wesleyan Church in Waaihoek, a township in Bloemfontein, where on Jan. 8, 1912 black activists and intellectuals formed the South African Native National Congress to fight against white rule. It was renamed the ANC in 1923.

While the history of Africa’s oldest liberation party is respected — the ANC helped bring freedom to South Africa after brutal oppression, and negotiated a peaceful transition from apartheid to democracy — its track record since taking power in 1994 has been decidedly mixed.

The ANC still has widespread support in South Africa, beating the main opposition party by a landslide in every election since 1994.

But the party has also been divided by infighting, most recently over the polarizing youth leader Julius Malema, who has been suspended from the ANC, and who addressed his young devotees at a rival event on the fringes of Mangaung.

Many South Africans are increasingly frustrated by a lack of progress on issues including jobs, housing, education and black land ownership. Some 40 percent of adults are unemployed and the gap between rich and poor has only grown wider since apartheid ended.

The ANC is spending 100 million rand ($12 million) on centenary celebrations in 2012, which this weekend include a candle-lit vigil, a star-studded concert, innumerable speeches and the lighting of a flame that will travel the country. The party has refused to name the donors who are footing the bill.

The figure is closer to 300 million rand ($36 million) when you include spending by government on infrastructure in Bloemfontein, according to reports.

All of the events planned by the ANC so far are celebrations of its history and past leadership.

But rather than spending millions on parties, critics say the money should be spent on something more substantial.