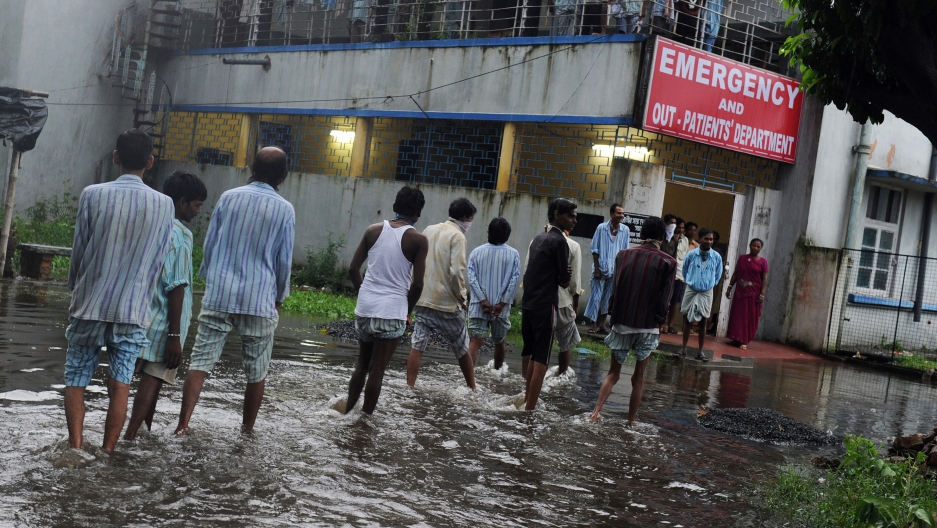 Tuberculosis patients through floodwaters at the Belur TB Hospital in Bally, some 45 kms north of Kolkata, India, on August 10, 2011.
Credit: DIBYANGSHU SARKAR
Share

An Indian hospital has detected 12 patients with a new strain of drug resistant tuberculosis (TB), according to the Indian press.

Hospital and public officials will meet Monday to discuss the situation, Dr Zarir Udwadia, consultant physician at the PD Hinduja Hospital in Mahim, where the cases were detected, told the Hindustan Times.

One of the 12 patients has since died.

The Times of India wrote:

As the full form of TDR-TB suggests, none of the known TB combination drugs work on the patient. All 12 showed resistance to 12 drugs. "The TB bacilli have obviously mutated. The emergence of TDR-TB has grave implications for public health," said Hinduja Hospital's Dr Zarir Udwadia, whose observations have been published in the latest issue of the US-based Clinical Infectious Diseases (CID) peer review journal.

A senior public health official told the paper that drug resistance developed mainly because TB patients failed to complete the 6- to 9-month first treatment phase. "They feel better within a couple of months of taking the drugs and so they stop taking them. However, the TB germs in the body are not completely vanquished and they again multiply."

Meanwhile, Dr PY Gaikwad, joint director for TB at the state health department, had told the Hindustran Times on Friday that the Hinduja hospital findings could not be relied upon as its laboratory was not accredited to detect such cases.

However, Udwadia said that Hinduja had a WHO-certified laboratory. “Most government centers send their sputum samples to Hinduja hospital’s microbiology laboratory for drug sensitivity test because they don’t have this facility.”

Tuberculosis, the Times of India wrote, kills around 1,000 people a day in India, and according to the US Mission to the World Health Organization (WHO) in Geneva, about 1.6 million people worldwide each year.

A WHO survey of over 90,000 TB patients in 81 countries in 2008 found expectedly high levels of multi-drug resistant TB, the BBC reported.

The survey also found cases of extensively drug resistant TB which is virtually untreatable in 45 countries.

The survey found at the time that the TB strains were "resistant to at least the two most powerful anti-TB drugs, isoniazid and rifampicin."

It was especially prevalent in the former Soviet Union: with more than a quarter of all new TB cases in Azerbaijan's capital, Baku, multi-drug resistant.

Dr Amita Athawale, head of the chest department at King Edward Memorial Hospital in Mumbai, told the Times of India that TDR-TB was a reality in the country.

"The cases we clinically isolate are just the tip of the iceberg," she said. TB is one of the biggest killers in India, along with heart attack.