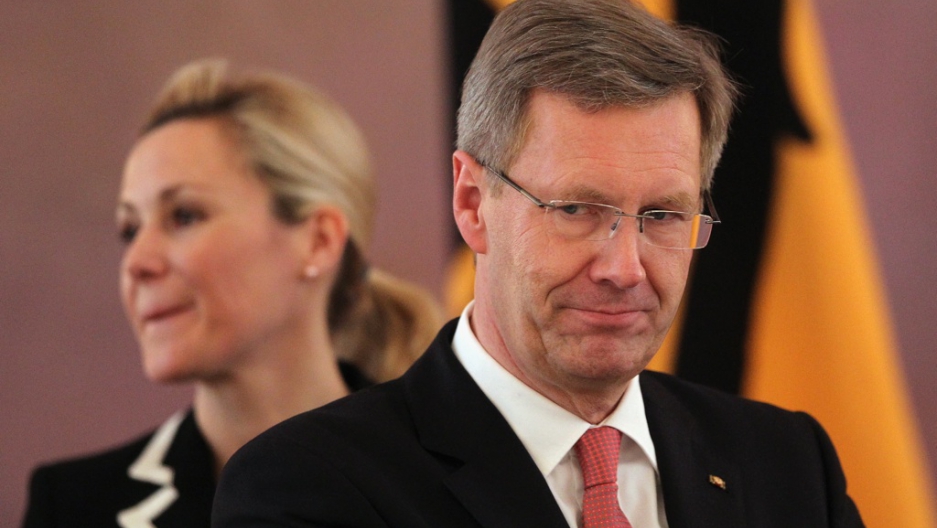 German President Christian Wulff and his wife Bettina are at the center of a scandal involving a large private loan and the media.
Credit: Sean Gallup
Share

BERLIN — A shady loan. A furious voice mail. And an outraged tabloid editor.

But just it has done more than call into question the ethics of a politician and his party. It has also exposed the all-too-chummy relationship between Germany’s media elite and politicians.

“I would call it a mixture of a scandal and a soap opera,” said Hans Kleinsteuber, a professor of journalism and political science at the University of Hamburg. “Traditionally, we have media companies that are closer to political parties (than) in the US.”

The scandal blew up after Germany’s biggest-selling newspaper, the daily tabloid Bild, reported last month that Wulff received a private loan worth 500,000 euros ($650,000) from the wife of a wealthy friend in 2008 — below market rates — and evaded lawmakers' questions over it. He then used that money to finance the purchase of a house.

But the scandal took an odd twist when it emerged that the president called Bild’s editor-in-chief, Kai Diekmann, and left an eerily mafia-esque message on his voice mail, threatening “war” if the story about his suspect loan were published.

“No federal president before has been so stupid, especially if you look at the issues at stake,” said Steffen Grimberg, media editor of the German left-wing daily Taz. “We are talking complete personal interests here.”

Meanwhile, the public furor over Wulff and his attempts to squelch what many here see as independent press coverage has grown, with many calling for the president — a largely ceremonial post in Germany and one charged with guarding the constitution and the press freedoms it guarantees — to step down.

That is why a somewhat sheepish Wulff set out on a public-relations mission this week, appearing in a nationally-televised interview: He apologized for his now-infamous answering machine gaffe, but gave up little ground.

"I know that I've done nothing illegal but didn't do everything right,” Wulff told over 11 million viewers Wednesday night.

But just a day later, Wulff refused to allow Bild to publish the transcript of his voice message.

“It’s clearly an attack on press freedom in Germany, what the president has tried to do,” said Hendrik Zoerner, press spokesman for the German Association of Journalists. “We’ve never seen this from a president or a chancellor.”

But more troubling, say some media analysts, are the details emerging about the long-standing relationship between Bild and Wulff.

Bild is part of Axel Springer, one of the largest media companies in Europe, and is known for its openly conservative slant on politics. Many call Bild a "kingmaker."

Springer’s German outlets (especially Bild), say analysts, have always been close to the conservative Christian Democrats. That is especially true for Wulff, whose relationship with Bild started when he served as state premier in Lower Saxony.

When Wulff left his first wife and took up with his new wife Bettina, he could have faced a political firestorm within his own party. But many say it was Bild that helped cement his image as an upstanding family man, glorifying his new wife as the blonde beauty at her husband’s side.

“Bild helped him tremendously by presenting him and his wonderful, charming new wife in very, very nice and rosy pictures,” said Grimberg.

Kuno Haberbusch, a journalist for German public broadcaster NDR and a member of the investigative journalism organization Netzwerk Recherche, said Wulff even invited Bild reporters to his house when his son was born.

Some German journalists say the tradition of a hard-hitting, watchdog media is often lacking. Instead of an adversarial relationship between politicians and the media, it's rather cozy — so cozy, says Haberbusch, that the line between journalism and friendship is often blurred, leading to a tradition of back-scratching and soft reporting.

“At times you see this much-too close fraternization between journalists and politicians," he said. "They meet after work over the same buffet, and (journalists) like to feel connected, they like to sit at the same table with people in power. As a journalist in Berlin, you want to feel like you belong.”

It is that relationship that has upheld a tradition often taboo elsewhere: the practice of quote authorization, where journalists allow public figures to read their quotes or even entire interviews and decide what they will and will not authorize for print.

“It’s become increasingly popular in Germany over the years,” said Zoerner. “But it’s bad for the quality of journalism if an interview can be reviewed and changed.”

Quote authorization is an especially difficult pill to swallow for foreign correspondents, who complain it turns them into press officers for their sources.

In the US, the rule is that anything a politician says is on the record — meaning it’s quotable by the media — unless the source and journalist agree in advance to another arrangement.

One American correspondent said she interviewed a leading CDU politician about the euro crisis and taped it, only to find his quotes had to be approved by his office afterward. After receiving back the quotes, she found entire sentences stricken and “not authorized” written by way of explanation.

Another recounted an interview with a multinational tech firm’s customer, who was critical of the leading competitor. But the customer then backed out during the quote authorization process, forcing the reporter to scramble for another interview at the last minute.

Still, many believe it is easier to play along than not.

“Most journalists go along with it because they have had bad experiences when they refuse to,” said Zoerner. In other words, politicians will simply refuse to be interviewed again.

But not always. In 2003, the Taz daily newspaper conducted an interview with the Social Democrats party secretary general, Olaf Scholz. When the Taz reporter received the authorized version of the interview in return, it was stripped down beyond recognition. So the paper decided to print the entire interview – including the unauthorized parts that had been crossed out. The Taz’s blacked-out edition unleashed a furor, with several of the country’s biggest and most established newspapers such like Frankfurter Allgemeine Zeitung protesting the practice, blasting public figures with commentaries and editorials.

“It’s one of the most stupid things the German press has given into,” said Grimberg. “With electronic media which broadcasts things live, there is no such thing as authorization of quotes or anything like that, so it puts the printed press at a disadvantage.”

Another issue is a lack of access to information. Journalists have a difficult time getting documents from officials, say analysts. It has become so bad that the Federal Commissioner for Data Protection, Peter Schaar, recently called for freedom of information to be enshrined in the German constitution.

Even so, there are bright spots.

Netzwerk Recherche was founded 10 years ago in a bid to promote original and hard-hitting reporting among German journalists. Through the network, Haberbusch and his colleagues have pushed back against stubborn government administrations or public figures, demanding the freedom of information — and teaching journalists how to fight for it:

“They have to have time, the contacts and really the dogged determination to bring to light what other people are trying to cover up.”