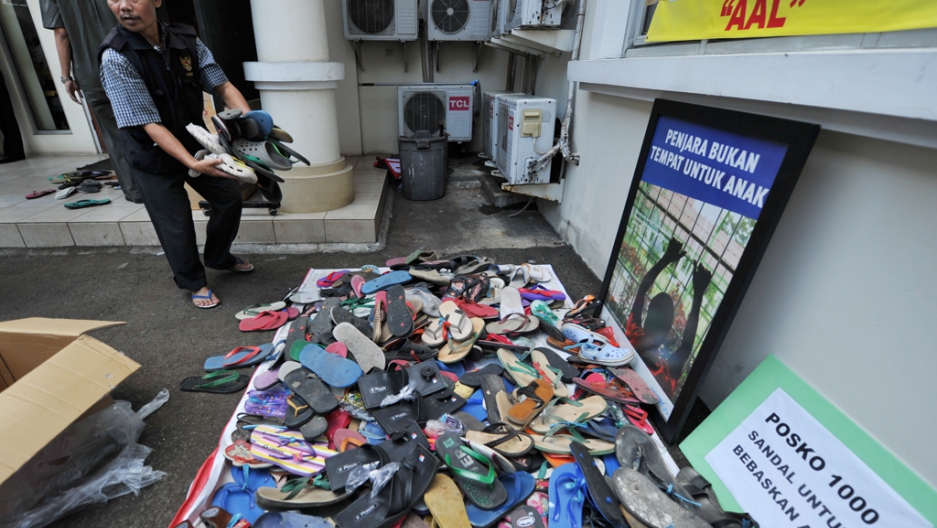 An official from Indonesia's Child Protection Commission carries sandals they received by package at their office in Jakarta on Jan. 4, 2012.
Credit: Bay Ismoyo
Share

JAKARTA, Indonesia — Stories of petty theft — ranging from garden flowers to bunches of bananas — have been making headlines in Indonesia in the wake of the trial of a 15-year-old boy facing up to five years in prison for stealing a police officer's old sandals.

The case, seen here as a prime example of police abuse of power, sparked a wave of protests in which the sandal became the cause celebre.

On Wednesday a court in Palu, Central Sualwesi, declared the boy guilty of theft but released him into his parent’s custody, a veritable victory for a public that has grown increasingly indignant toward what it sees as rampant police misbehavior.

Known only as AAL because of his age, the boy could have faced a five-year prison sentence – the same punishment handed down in the past to terrorists and major corruption convicts. Allegations by the boy’s parents that police had used violence during their interrogation only heightened public ire.

To draw attention to cases in which children are criminalized for minor infractions, the National Commission on Child Protection launched a sandal collection campaign on Dec. 29.

Organizers, who received more than 1,200 cheap, used flip-flops by the time the trial ended, began delivering their loot on Thursday to National Police headquarters in mock protest of the officer who brought the charges.

By Friday, however, another case had captured social network feeds after a local newspaper released a story about a 22-year-old man charged with the theft of 15 bunches of bananas.

That case could also result in a maximum sentence of five years in prison, but the suspect’s family claims he is mentally challenged and therefore does not deserve to go to jail.

“Who’s mentally challenged here?” one Twitter user wrote, referring to what has widely been seen as another prime example of police arrogance.

This is not the first time potentially harsh punishments for pretty crime have raised concerns about uneven justice in Indonesia, a burgeoning democracy that has made many positive strides in the 13 years since protests pushed former dictator Suharto from power.

Despite those advances, human rights advocates say too often police and prosecutors target the poor, powerless and uneducated while avoiding cases that involve people with money and authority.

“This is about the poor mindset of legal authorities to deal with these cases,” said Haris Azhar, a coordinator with the human rights organization Kontras, explaining that judges and prosecutors should be sensitive to impoverished citizens whose circumstances sometimes force them to steal.

Other analysts say the sandal case is but one of many examples that highlight a lack of integrity among police and prosecutors.

“They have a track record of abuse of authority and impropriety which is still largely unaddressed,” said Sebastiaan Pompe, a legal expert who has authored a book on Indonesia’s Supreme Court and advised the government’s national legal reform program.

National Police spokesman Saud Usman Nasution disputed such criticism, saying the police were open and transparent, and that when cases of misconduct were uncovered the guilty officers had been censured.

On Thursday, a police tribunal sentenced Sgt. Ahmad Rusdi Harahap, the police officer who brought the sandal case to court, to 21 days in jail for abusing AAL, and forbade him from seeking a promotion for one year. The tribunal had earlier handed down the same punishment to Rusdi’s colleague, Brig. Jhon Simpson.

According to Rusdi, AAL stole his sandals from outside a police boarding house in Palu in November 2010, while walking home from school with friends. Six months later he and other police interrogated the boy regarding the theft and beat him badly.

AAL’s parents then reported the abuse to a regional police oversight body. Rusdi brought the charges against AAL following his parents' complaint.

Nurkholis Hidayat, the director of the Indonesian Legal Aid Institute, said the decision in the disciplinary tribunal was proof that the boy’s case should never have gone to court since it meant the information that the police obtained during the interrogation was likely forced.

He also criticized the lack of convincing evidence presented during the trial, noting that the sandal Rusdi claimed was stolen differed from the one produced in court.

Azhar, who has kept a close eye on the case, says he does not suspect police or prosecutors of pressuring the judge into issuing the verdict – a not uncommon occurrence. But he does believe Rusdi brought the case against AAL as part of a tit for tat.

“That’s why they pushed the process,” he said. “They tried to build a bargain using the authority they have.”

Concerns over police misbehavior — including abuses of power and brutality against civilians – have been in the forefront of recent news. But media attention to cases of uneven justice first heated up in late 2009, when a court in Central Java sentenced a poor, elderly woman to a six-week suspended sentence for stealing three cacao beans.

In December of that year an online campaign that garnered tens of thousands of supporters put pressure on prosecutors who had charged Prita Mulyasari, a housewife and mother of two children, with six years in prison for violating a controversial law on online exchanges of information — Mulyasari had sent an email to a friend criticizing her treatment at a local hospital.

Mulyasari then became a symbol for all that was wrong with a legal system that watchdogs call one of the world’s most corrupt. Analysts say the attention drawn to her case by the protest, dubbed “coins for Prita” since it sought to raise money for fines the court might have imposed, likely played an important role in the judge’s decision to dismiss the charges.

The reason such spontaneous protests garner support, say legal advocates, is because they tap into a greater sense of injustice in cases where ordinary citizens face harsh punishment for minor offenses.

“The strength of the sandal case, much as with the prior Prita case, is the strength of civil society," Pompe explained, noting that the public outcry helped lift it above the thousands of “humdrum cases,” and worked to force further action against the police.

“The promising part is that it shows how civil society is articulate, politically savvy, agile, and a political force to be reckoned with,” Pompe said. “This should be seen as a step in the right direction.”