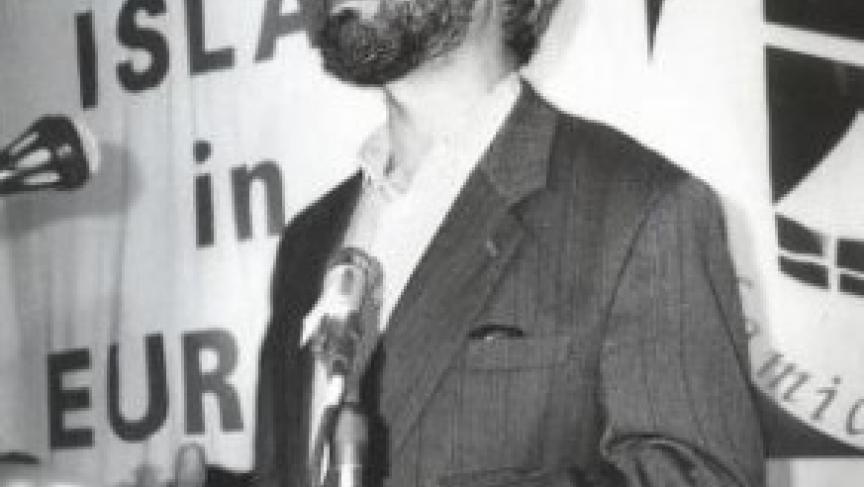 Ennahda leader Rachid Ghannouchi has returned to Tunisia after nearly 20 years in exile. (Photo by an unknown author, via Wikimedia Commons.)

The Arab Spring revolutions began in Tunisia when a street vendor, frustrated by government corruption, set himself on fire.

Almost a year later, there was a similar incident Thursday in Tunisia. This time it was an unemployed man who immolated himself.

It’s a reminder of the challenges still facing Tunisia’s new, democratically-elected government. The government is headed by the formerly-banned Islamist party called Ennahda.

It bills itself as a moderate Islamist party. Soumaya Ghannouchi, the daughter of the party’s leader, was 12-years-old when her family fled Tunisia. Rachid Ghannouchi, her father, has been in charge of Ennahda, which means “renaissance,” for two decades. The Ghannouchi family lived in exile until last January, when the Tunisian uprising drove former dictator Zine el Abidine Ben Ali into exile.

“We were able to come back, which was great, to see our relatives, and see our country after such a long time, an incredible time,” Ghannouchi said. “We are really grateful. And since then really incredible things have been happening.”

The first incredible thing was the way people greeted her father’s return to Tunisia after more than 20 years in exile.

Thousands gathered at the Tunis airport on Jan. 30, 2011, when Ghannouchi arrived. Ten months later, Tunisians held their first free and fair elections since the country gained independence from France in 1957. Ennahda won 40 percent of the seats in parliament.

Ghannouchi said Ennahda’s success in the election is partly due to its history over the past few decades.

“It’s been at the forefront of the struggle against the dictatorship, it’s given many sacrifices so people appreciate that,” she said. “And even though there was no organized structure on the ground before the revolution because of the crackdown on the party, the people still kept their allegiance to the party. And once they were able to express that they did so and very quickly organized themselves.”

Dressed conservatively in a bulky coat and a hijab wrapped tightly around her head, Ghannouchi is a practicing Muslim and a professional woman. She said Ennahda is one of the most progressive political parties in the Arab world – Islamist or otherwise.

“We said clearly that it’s not the duty or right of the state to interfere in people’s personal choices, “ she said. “What they eat, drink, or how they live. We don’t believe in a theocracy that imposes a lifestyle or thoughts or ways of life on people, we believe in the right of every Tunisian woman and man to make that choice.”

Tunisia is by far the most secular country in the region. After independence, women were given the right to vote and be elected to parliament, to earn equal wages to men and to divorce, among other things. Ghannouchi said Ennahda looks to protect, and advance, these aspects of Tunisian society.

“We want to strengthen the gains made by Tunisian women, we are proud of those gains, and we want to develop them further,” she said.

Since the party’s founding, Ennahda’s leadership has disavowed violence and endorsed tolerance and pluralism. Ghannouchi and other party officials say they look to countries like Turkey, Indonesia and Malaysia as models for the role Islam can play in the state.

But there are skeptics. Even among religious Tunisians, there is uneasiness with an Islamist party – no matter how moderate – in power. Saleh Basharre said he didn’t like the idea of mixing religion and the state, and he didn’t vote for them.

“I was afraid that Ennahda, if they won, they will be narrow minded and extremist,” Basharre said. “And you should know I’m Muslim, and I love Islam, but I don’t want people to push me to do things, and to order me to do things. Religion is between me and God.”

Ennahda dismisses these fears, saying it’s the same old propaganda about Islamists that regional dictators have always thrown around. But some would welcome a truly Islamist government.

A picture of Islam’s holiest site, the Ka’ba, in Mecca, adorns the walls of a grocery store in a middle class neighborhood outside Tunis. 29-year-old Bareech Hathnawy said he voted for Ennahda because he wants the party to impose moral order on society.

“We want them to stop bad language on the streets,” he said. “You go on the street with your sister or mother and hear bad words on the streets. The government should stop this. They need to stop other bad things like people drinking alcohol on the street and girls wearing short skirts. “

Hathnaway is from the south, where Tunisians are more conservative. He said people there voted for Ennahda for many of the same reasons he did.

“People in the cities are more open-minded, but in the south they are more conservative,” Hathnaway said. “For example, if I saw my sister with a cigarette I would kill her. This is why people voted for Ennahda in the south — to stop girls from wearing short skirts, these kinds of things.”

Still, even Hathnawy doesn’t think women should be forced to wear the veil.

Ziad Mahearsee, the head of the Tunisian news website “Tunisia Live,” said he didn't think Ennahda had a plan to drastically change society. He said most people probably voted for Ennahda because they seem honest, not because of how they practice Islam. Besides, he said, Ennahda realizes that the country faces huge issues.

“What we need now more than anything is 750,000 jobs,” Mahearsee sais. “And these people are aware of the challenges of the working poor in Tunisia. So I think most Tunisians will judge Ennahda on capacity to create jobs and allow the Tunisian economy to flourish — rather than the religious aspect of things.”

Ennahda is also part of a diverse governing coalition. Its partners are two determinedly secular parties. And Rachid Ghannouchi seems eager to continue the western friendly traditions that have been hallmarks of Tunisia’s foreign policy, and to put western governments at ease about his party’s newfound position