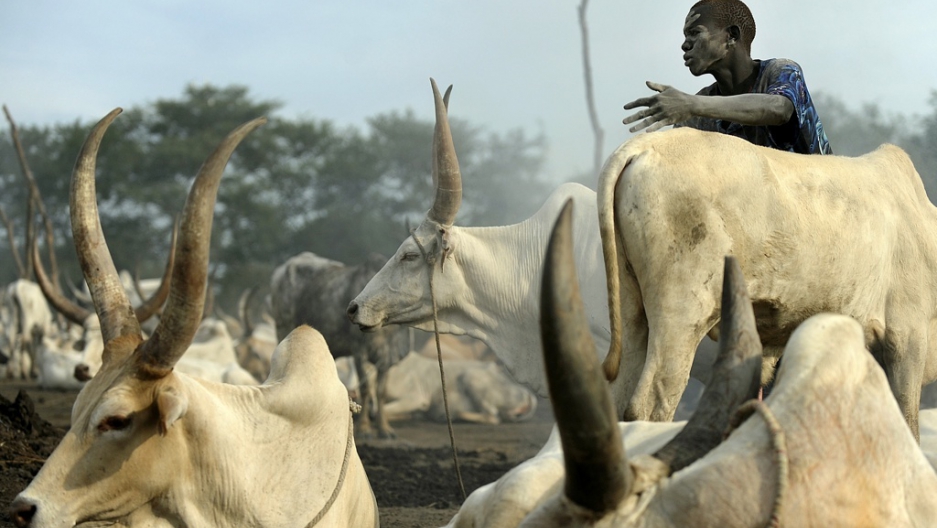 Much of South Sudan's deadly ethnic clashes are over violent cattle rustling. Here a herdsman at a cattle-camp near South Sudan's central town of Rumbek on November 13, 2011. One of Africa's longest-running wars left South Sudan battling a bitter legacy that threatens prospects for peace -- a stockpile of weapons spurring cattle raids and banditry.
Credit: Tony Karumba
Share

BOSTON — The more than 50,000 people who fled into South Sudan's harsh bush this week highlight the urgent need to stop the ethnic violence that is plaguing the world's newest nation.

A top local official said Friday that more than 3,000 people have been killed in the fighting there over the past week.

"There have been mass killings, a massacre," Joshua Konyi, commissioner for Pibor County in Jonglei state, told the AFP.

The danger of violent tribal conflict in South Sudan is the story that was largely overlooked amid the celebrations when the country became independent on July 9, 2011.

For more than 20 years, the South Sudanese battled the Khartoum government in northern Sudan. And since the July independence, attention has focused on the agression of the north's President Omar al-Bashir's forces along the border with South Sudan and in the Blue Nile and South Kordofan states. So the warning signs of seething ethnic tensions within South Sudan were not heeded.

But now it is glaringly obvious that South Sudan, with a population of 7.5 million, is marked by bitter ethnic divisions that cannot be solved easily, even by the peacekeeping forces. The tribal rivalries date back more than a hundred years and can only be solved by education, economic development and responsive governance. All of which are in short supply right now in South Sudan.

The hopes for stability and peace in its first year were dashed this week when large-scale ethnic violence broke out in Jonglei state.

South Sudan declared Jonglei a disaster zone because of the mass displacement of people. President Salva Kiir's government has appealed for international aid for those who fled and who will find their homes razed and their cattle stolen.

After days of fighting, the area is now under government control, said Information Minister Mariel Benjamin Barnaba to the BBC.

The conflict reached a peak earlier this week when the Murle people in Pibor town were attacked by an estimated 6,000 ethnic Lou Nuer armed fighters, who outnumbered army and UN forces.

This is the latest round in a cycle of violence which has lasted several months. The recent attack is seen as retribution for an incident last year in which about 600 Lou Nuer were killed by attackers from the Murle community, who also took away 38,000 cattle.

The clashes began as cattle raids but have escalated.

The area has begun to return to normal but many say the South Sudan government must implement long term policies that will defuse the ethnic hatred.

The Murle people fled as the Lou Nuer militia moved into the remote town. Gunmen burned thatched huts and looted two medical facilities run by Doctors Without Borders (DWB, also known as Médecins Sans Frontières) over the past week.

People are slowly coming back to Pibor, said Sarathy Rajendran, head of DWB in South Sudan, who was in Pibor town on Thursday morning. He said the medical assistance group planned to start operating in the town by the end of the week, according to the Guardian.

"I was there this morning, which is an hour away by plane from Juba [the capital]," said Rajendran. "Parts of the town have been burnt, our facilities were completely looted, but people are coming back and are not afraid any more. It is stable now. There are enormous needs, some people need every single item. Our first priority will be medical care, but we are planning to provide non-food items as well so people can start rebuilding."

There is an immediate need to provide emergency services to the displaced people. But this should not hide the fact that the South Sudan government and the international community must address the underlying, largely economic, causes of these cycles of inter-communal violence.

In Jonglei state cattle are currency. Young men need cattle to pay dowry prices and to marry. The Jonglei people's reliance on cattle is compounded by a lack of basic services and economic opportunities. This fuels cattle raiding between ethnic groups and this quickly escalates into open conflict.

South Sudan, with the support of the international community, should "work to provide communities in Jonglei state with basic services, such as access to medical care and education, infrastructure improvements, such as the construction of roads, and diversified economic opportunities," said Jennifer Christian, South Sudan analyst for the Enough Project. "These economic incentives will, in turn, alleviate these communities’ reliance on a cattle economy and help to combat violence associated with that economy."

In addition to diversifying economic opportunities for poor rural communities, the Kiir government, with support from the international community, are challenged to "develop the capacity of its security organs and judiciary, to help guarantee civilian protection and to ensure individuals responsible for cattle raiding violence are held accountable," said Christian.

The root causes of the ethnic violence can also be alleviated by equitable political representation and fair distribution of natural resources, according to Minority Rights Group International, which focuses on the need of indigenous peoples.

"Competition between ethnic groups over scarce resources has escalated in South Sudan. At the same time there is a security vacuum, leading to the formation of militia groups and a breakdown of traditional structures of authority," said Chris Chapman, the Minority Rights Group's head of conflict prevention. "This will continue to threaten the stability of the new nation, unless the government acts quickly to ensure security, inclusive representation for all communities, and equitable access to land and natural resources."

South Sudan's clashes may look like cattle raids, but Chapman said they have "deeper causes to do with poverty, competition for scarce resources, the plethora of small arms left over from a decades-long war, and marginalization of ethnic minorities. Some minority groups felt that their interests are not being represented within the South Sudanese political system, and that resources have been diverted to more populous ethnic groups."

In particular, the Murle people do not appear to be well represented at the highest levels of government, which creates a feeling of injustice among the people.

In addition to keeping a watchful eye on the belligerence of Sudan on its northern border, South Sudan has the pressing problem of resolving the ethnic tensions among its own people.