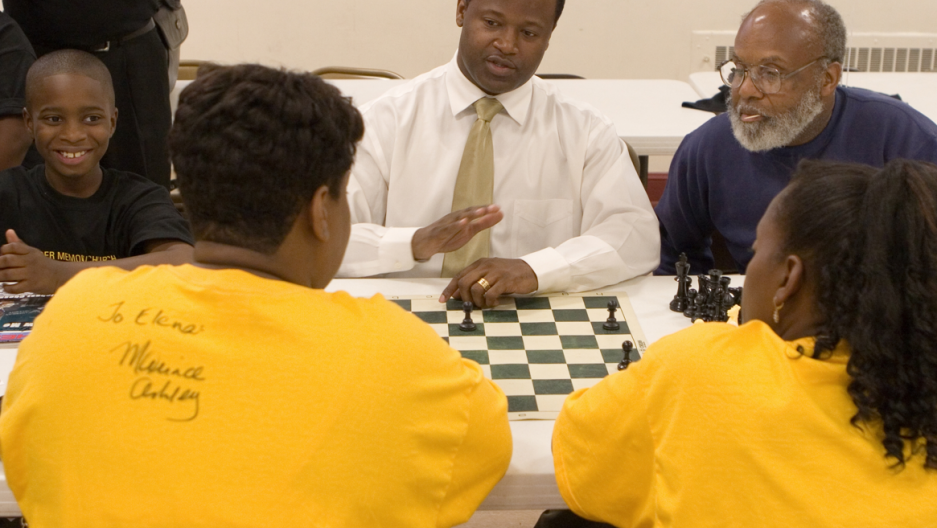 Chess Grandmaster Maurice Ashley works with students, showing them how to play the game. (Photo courtesy of MauriceAshley.com.)

There are some 1,000 chess grandmasters around the world, but just one of them is an African-American.

Maurice Ashley, 45, wasn't even good enough to play on his high school chess team, but he worked hard at it and 11 years ago reached the rank of grandmaster.

There are three African-American chess players looking to join Ashley atop the list of grandmasters. All from New York, they've reached the rank of master, the level before grandmaster, before they even had their 13th birthdays. It took Ashley 14 years to move from master, which he reached at age 20, to grandmaster.

"I remember back in the day, growing up in Brownsville, Brooklyn, you'd be hard-pressed to find anyone to play chess against — much less have kids, barely teenagers, being master's of the game," Ashley said. "So it's pretty cool to see these kids who are fierce competitors, and pretty average kids at that. They're not just chess geeks as one might imagine."

Now Ashley, who learned the game when he was growing up in Jamaica, makes chess his life. He travels the world tutoring and inspiring students in the game of chess. Sometimes he'll play an entire room full of students.

He didn't really become serious about chess, he says, until he got to Brooklyn Tech High School, after his family moved to New York City.

"I saw a friend playing the game. I knew the rules — I was a pretty smart kid and game play — so I played him," Ashley said. "He crushed me. I didn't quite understand why that was."

Ashley said he had a destiny moment when he saw a book about chess in the library. He figured if he read it, learned the strategies and then went back to his friend, he'd be able to win.

"He crushed me again," Ashley said. "It turned out he'd read that book and nine other books, and that's when I realized how much knowledge was indeed power."

Ashley said chess players now have to be much more creative and prolific to maintain the status of grandmaster nowadays, because technology has made it easier for chess players to trade information about the latest moves and strategies they've seen.

Ashley said being the only African-American grandmaster is important to him — in that he wants to be a role model to younger generations.

"I had an intense passion, bordering on an obsession, for this game. It completely consumed my life," he said. "I wanted to be great at it."