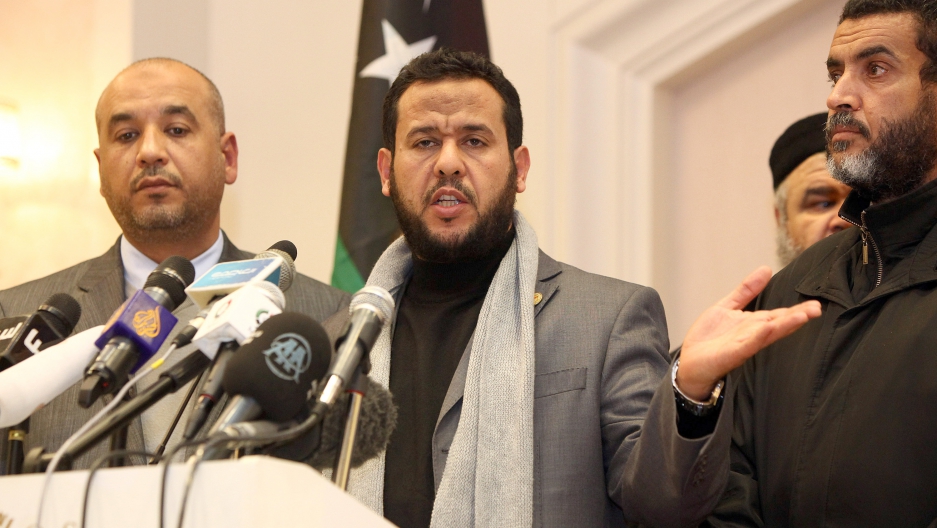 Abdul-Hakim Belhaj, chairman of the Military Council of Tripoli, speaks during a press conference in the capital following deadly clashes between groups of former rebels in which four people were killed on Jan 3, 2012 .
Credit: MAHMUD TURKIA
Share

The former rebel who now commands military forces in Libya's capital has refused to cooperate with a British inquiry into the use of torture during the so-called "war on terror," the Associated Press reported.

Abdel-Hakim Belhaj, who led the charge on Muammar Gaddafi's Bab al-Aziziya compound in August and is suing the British government and its security forces for their alleged roles in his 2004 rendition and torture in Libya, said through his lawyers today that he could not cooperate with an official inquiry as it was toothless.

Known as the Detainee Inquiry, a three-member panel led by the retired judge Sir Peter Gibson was created in September to investigate allegations that Britain's Secret Intelligence Service, commonly known as MI6, was complicit in torture by other countries following the terrorist attacks of September 11, 2001. The panel was created after papers implicating both the CIA and MI6 were discovered in Tropoli, according to the BBC.

In a statement, Belhaj said the Detainee Inquiry lacked the power to get "to the truth of Britain's involvement." Other detainees from the US detention facility at Guantánamo Bay who won settlements from Britain have likewise refused to cooperate with the inquiry, according to the AP.

Leader of the newly formed Tripoli Military Council, Belhaj has downplayed his past associations with radical Islamic groups, according to al-Jazeera.  Belhaj was a founding member of the Libyan Islamic Fighting Grouop, or LIFG, of which several past and present members have also held positions in al-Qaida, according The Daily Beast's Babak Dehghanpisheh.

Belhaj himself makes no secret of having met Osama bin Laden in the late 1980s, back when they were both fighting the Soviets in Afghanistan. Even so, he denies any sympathy for al Qaeda’s aims. “Meeting with a person with a specific ideology doesn’t mean I agree with that ideology,” Belhaj told The Daily Beast. “I didn’t go to Afghanistan to fight with bin Laden. I went to Afghanistan to support the Afghans and fight with them.”