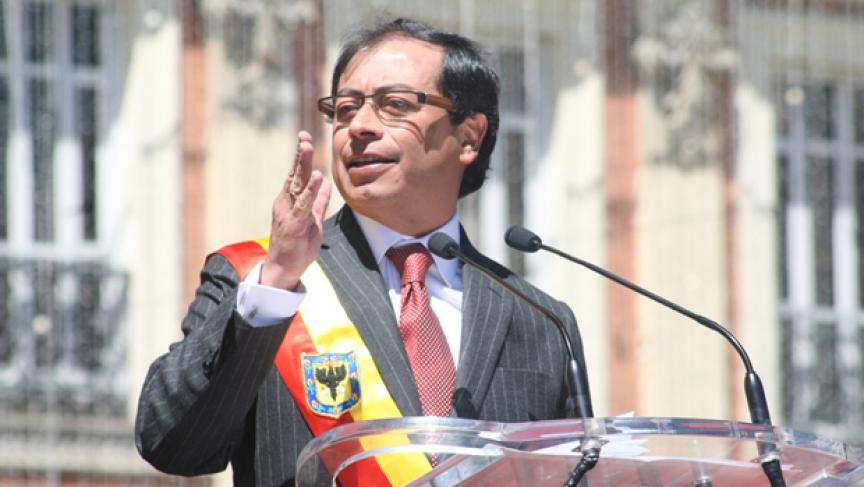 Gustavo Petro is the new mayor of Bogota, Colombia. (Photo by Agustin Fagua.)

Bogota, the Colombian capital, has a combative new mayor.

Gustavo Petro, who was sworn in on Sunday, once belonged to a leftist guerrilla group. He also served as a crusading senator who exposed links between fellow lawmakers and rightwing death squads. Now Petro must pivot from government antagonist to CEO of a city of 8 million people.

Petro, who is 51, has spent most of his life opposing the powers that be. In the 1960s and 70s, leftists like Petro were frozen out of Colombian politics. That gave rise to several rebel insurgencies that tried to overthrow the government.

As a teenager, Petro joined one of these rebel groups, the M-19. Although he was arrested, imprisoned and tortured, Petro said he has no regrets.

“Societies always need rebels,” Petro said. “There was Washington, Bolivar, and Robespierre. Then came later generations of rebels. They changed the world.”

In 1989, the M-19 disbanded. Petro and other M-19 members received amnesty and formed a political party.

“He is the son of a peace process,” said Daniel Garcia-Peña, a former government peace negotiator, who met Petro soon after he laid down his weapons. “He came to the conclusion that armed struggle had no possibility of successfully changing Colombia. He saw how the armed struggle led to the creation of many of the paramilitary groups and he was convinced that the moment for armed revolt in Colombia had passed.”

Petro eventually won a seat to the lower house of congress, and was then elected senator. In 2006, Petro stood up on the senate floor to denounce many of his fellow lawmakers, accusing them of collaborating with far-right paramilitaries who trafficked drugs and murdered thousands of Colombians.

“By cutting deals with the paramilitaries,” Petro said at the time, “these lawmakers turned over governing powers to the worst criminals this continent has seen in recent decades.”

Petro received a flurry of death threats. But one-third of Colombia’s legislators eventually ended up under investigation, on trial or in prison.

Francisco Anzola, a Bogota politician and boyhood friend of Petro’s, said the senate speeches raised Petro’s stature and paved the way for his election as mayor, often seen as a launching pad to the presidency.

But critics question Petro’s moral authority given his membership in the M-19, which carried out targeted killings and occupied the Palace of Justice in a 1985 siege that left more than 100 dead. Petro has said he wasn’t involved in the violence. But former Colombian President Alvaro Uribe has called Petro a guerrilla disguised as a politician.

“The triumph of Petro in Bogota is a sign that it’s possible through the democratic process for the left to achieve power,” Garcia-Peña said.

Petro takes over a city with crumbling streets, monster traffic jams and a widening kickback scandal that landed the last Bogota mayor in jail.

In his inaugural speech, Petro’s received the greatest applause for his plan to deal with rising crime. Instead of more police, he proposed a ban on carrying weapons in the city.

In some ways, it was a nod to his guerrilla past. As Petro reminded his audience, the M-19 laid down its weapons 23 years ago.

Bogota’s new mayor now stands as exhibit A that disarmament can work.