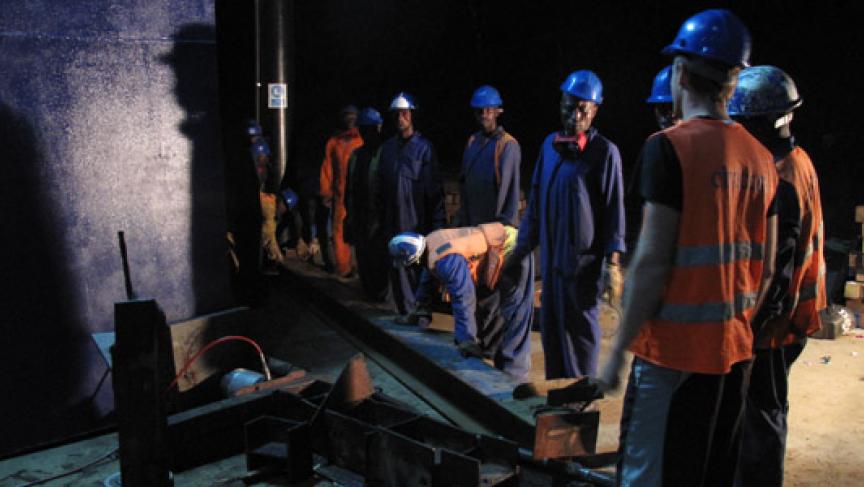 On the job into the evening, workers re-enforce rails guiding the methane extraction barge into Lake Kivu. (Photo by Anna Boiko-Weyrauch.)

Clusters of lights bob on the surface of the water of Lake Kivu, along Rwanda’s western border.

Lake Kivu’s fish are a crucial source of food and income for local residents. But there’s something else below the surface besides the fish, something fraught with both peril and, locals hope, promise. Deep at the bottom of the lake, almost a thousand feet down, Kivu’s water is rich with naturally-occurring gas — including high levels of carbon dioxide and methane.

The gas is produced by unusual geological and biological processes. It’s a natural oddity, and it could be very dangerous, said Charles Nyirahuku, who manages energy projects for the Rwandan government.

“It builds up in the water,” Nyirahuku said, “and it can cause a sudden outburst or release of methane into the atmosphere.”

Geologic evidence shows that long ago, Lake Kivu had sudden releases of gas — limnic eruptions, as they’re called. Recent events elsewhere show how dangerous such an explosion could be today. In the 1980s, carbon dioxide bursts from two lakes in Cameroon killed nearly 2,000 people. Scientists believe Lake Kivu could be even more deadly, because they estimate it has about 1,000 times more gas than Cameroon's lakes.

“We are told that this is one of the major environmental risks which we can face,” Nyirahuku said. "And the only way to avert this kind of risk is to extract the methane.”

Nyirahuku is helping develop a project to capture the lake’s dissolved methane and use it to generate energy.

The early stages of the project are rising on the edge of the lake, where workers chant in unison as they move metal beams next to a big blue barge, while welders fix rails that will guide the barge into the lake.

The barge will eventually float to a spot about eight miles away and become part of what’s known as the KivuWatt project. Equipment on the barge will suck the gas-rich water from the deepest part of the lake through what are called risers —basically big straws — stuck more than a thousand feet into the lake, said Bill Barr, a vice president at New York-based ContourGlobal, which is developing the unusual power plant.

Barr said the gasses will be separated from the water, and then from each other. The less-volatile carbon dioxide will be pumped back below the surface, and the methane will be piped to shore, where it will be used to fuel a power plant.

If all goes according to plan, the process will help solve two big problems: the threat of an explosion, and Rwanda’s chronic energy shortage. Rwanda has very few energy resources of its own, which has helped make it one of the most expensive places in East Africa to power a home or business. Almost half of the electricity here is generated using diesel fuel, which has to be trucked into the landlocked country.

Backers hope the KivuWatt project will eventually double the amount of electricity generated in Rwanda and help wean the country off diesel energy.

But, there are risks.

For one thing, different layers of the lake have different concentrations of gas, and disturbing them too much could itself cause the very kind of explosion the project is meant to prevent. Experts have come up with guidelines for what they say will be safe gas extraction, and the Rwandan government has created a team to monitor the KivuWatt project.

Engineer Augusta Umutoni, who’s is in charge of the team, said she’s confident there's no risk the project might cause an explosion. But she said that isn’t the only risk.

Extracting the gases could change the lake’s chemistry, Umutoni said. Among other things, there’s a risk the surface water could become more acidic, or see a growth in algae or other organism, which could be bad news for Kivu’s fish and the human communities that depend on them.

That’s why the methane project will start small, with just a pilot phase expected to start producing energy later this year.

Back on the lake, the fishermen know the power plant will change their lives, one way or another. Issa Ndungutse hopes it will be for the better. He opes the methane project will reduce the risk of a gas explosion, and expects it to bring jobs and electricity to the area. Right now, he said, he doesn’t have power in his house.

Meanwhile the Rwandan government has much greater hopes for the unconventional project. If all the risks can be avoided, capturing Lake Kivu’s methane could be a big step in the country’s economic development.