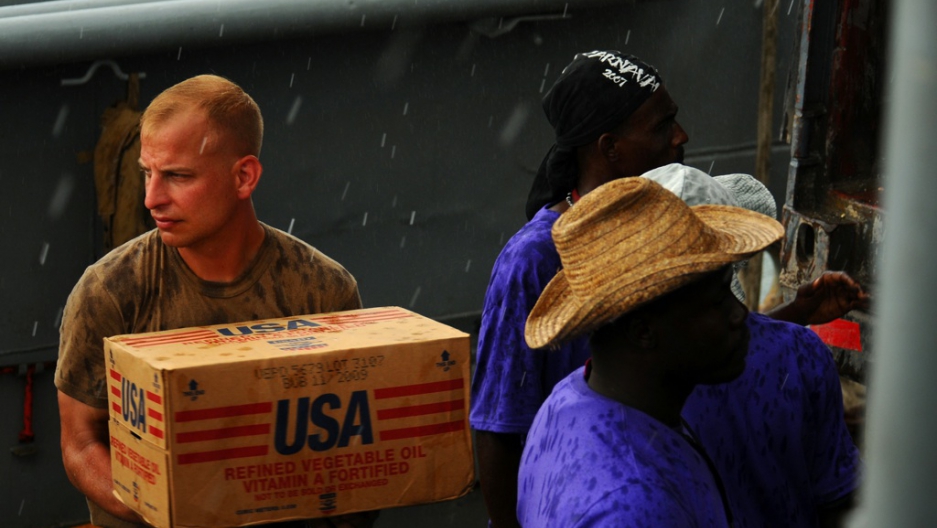 Crew members from USS Kearsarge load a landing craft with supplies to aid those affected by the hurricanes in Haiti in 2008. Only a fraction of America's foreign assistance is purely altruistic.
Credit: Joshua Adam Nuzzo/US Navy, via
Share

LONDON, United Kingdom — In the run up to the holiday season, there was a piece of news that will have eased any guilt felt by Americans about the festival of gluttony they were embarking on: When it comes to charitable giving, the United States is unrivalled by any other nation.

According to the Charities Aid Foundation, which put the United States at the top of its World Giving Index 2011, 65 percent of Americans gave money over the course of the past 12 months. The statistic helped raise the country from its fifth-placed ranking the previous year.

It’s not only individuals who remain generous in these difficult times. Despite major budget battles, Congress spared the country’s 2012 foreign-aid budget from its deficit-slashing axe.

Why exactly is the US still giving away so much money when it has to borrow to make ends meet? The answer lies in what actually passes for US government philanthropy.

Of the $53.3 billion 2012 State Department and foreign-aid budget, a huge tranche is earmarked for military purposes. Specifically, this includes $11.2 billion in war-related foreign aid for Afghanistan and Iraq, and a further $850 million to help Pakistan counter-insurgency capabilities. (The Afghan aid keeps flowing even though a recent audit highlights America’s inability to control the money poured into the corrupt and conflict-ravaged country.)

Other aid also comes with strings attached that make it more of a transaction than an outright gift. Assistance to Uzbekistan is conditional on the country granting the US military land access to neighboring Afghanistan. Aid to the Palestinians requires them not to press for statehood. And so on.

This is nothing new. For decades, aid offered by most countries has represented a complicated interplay of trade-offs, invested interests and conditions that, when mixed with corruption and red tape among both donors and recipients, can severely negate effectiveness.

So-called tied aid — the practice of linking assistance to purchases from companies in donor countries — is currently estimated to account for $69 billion, or more than half of global development assistance, despite pledges by many donors to unhitch their programs from commercial gains.

A glimpse inside the mechanics of this long tradition is offered by Columbia University political economist Timothy Mitchell, writing in the book, “Power of Development” by J.S. Crush. He argues that of $15 billion donated by the US to Egypt between 1974 and 1989, over half was spent in the United States.

Of the remaining 42 percent, or $6.3 billion, he said: "The entire amount, as far as one can tell, was spent in the United States or on American contractors in Egypt."

Today, the United States is by no means the worst offender. EU countries and Japan are accused of reneging on pledges made a decade ago to untie aid — cases highlighted at a recent conference in Busan, South Korea at which developing nations called for an end to the practice.

But when it comes to food aid, the US continues to bow to what some see as powerful lobbyists, who argue that government spending on donations and transport of foods to developing nations is essential to American agribusiness.

The process sees the government buy surplus food at home, thus safeguarding prices and agribusiness profits. The food is then sent to developing countries where, some argue, it increases aid dependency by flooding markets, pricing out local produce and robbing farmers of income.

Requiring an extensive network for distribution to the needy, food aid is also highly vulnerable to peculation and misuse, as has been seen in Somalia where a cartel of contractors, Islamist militants and local U.N. staffers were in 2010 accused of diverting food worth millions of dollars.

The US Agency for International Development has never attempted to hide the economic benefits of food aid. Its 1999 food report explicitly states: “The $2.4 billion in U.S. food aid provided this year, bought American food for a hungry world. The food went overseas; however, much of the money stayed here.”

US Secretary of State Hillary Clinton, in her address to the Busan conference last November, said that while efforts have been made to unshackle aid, “we cannot commit to have untied all American assistance.”

“One of the reasons tied aid has persisted is in order to get political support for the budgets that we turn into official development assistance,” she added. “So we try to untie as much as possible, but recognize the political constraints that we and others operate under.”

Clinton’s political argument, which echoes others in successive US administrations, holds little water with those pushing for more efficient use of aid resources. Americans will support aid programs, they argue, not because of business, but because they feel a moral obligation, and because they realize the security and health consequences of failing to support them.

He added: “The people who sign up to Oxfam’s mailing lists, [do not do this] because they’re getting US food contracts. It’s because they deeply care about this issue. There has been a sea change in the political support for our foreign assistance in the United States, and I don’t know that Washington has yet caught up to that change.”

That’s not to say that all US individual giving is motivated by altruism. The White House estimates tax deductible charitable contributions will offset $43.1 billion in federal receipts next year. Some individuals and organizations are also accused of using charitable bodies to park money out of IRS reach.

But while there are genuine reasons why Americans might feel guilty about seasonal gluttony, Adams insists there are many more reasons why they should feel good about their country’s efforts to help the needy — and reasons to continue supporting effective aid partnerships.

“The real question is, can we sustain the momentum to make sure it really has the impact we hope, because this is a generational challenge.”