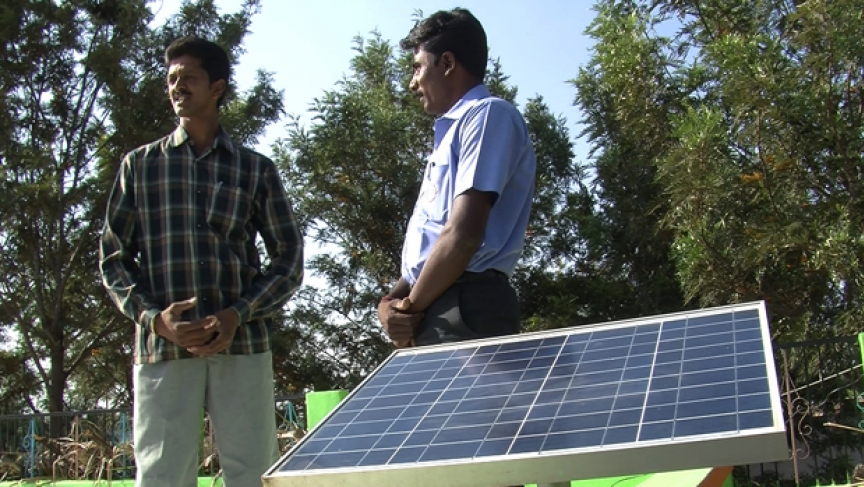 Silkworm farmer H. B. Manjunath talks with a solar technician about the solar panel installed on his rooftop.

Sonia Narang reports from southern India on the growth of solar power in rural parts of the country. Small loans have made solar panels available to homes and businesses that otherwise suffer from India's severe electricity shortage.

In Chemangala village in southern India, silk farmer H.B. Manjunath walks into a back room of a dark thatched roof cabin, flips on a light switch and watches as the cool light from the lamp illuminates hundreds of milky white silkworms crawling in a wooden box full of mulberry leaves. The worms need the crispy leaves to survive and spin their silk cocoons, but they'll only do it when there's continuous light. And Manjunath says that used to be very hard to come by.

"We had four or five hours of unscheduled power cuts everyday," Manjunath says. "Sometimes, we would not have it at all."

But that changed when Manjunath took out a small loan from his local bank to pay for a single solar panel and batteries to store the electricity. The 120 watt system generates enough power to illuminate the silkworms for three hours a day.

Now, Manjunath says, he's not worried even if he doesn't have grid power for 24 hours. "The solar works for us," he says.

Manjunath's bank loan was part of an effort in the southern state of Karnataka to promote affordable solar lighting in rural areas, an effort that's in turn part of a national trend. India's central government hopes to boost renewable sources of energy and install 20,000 megawatts of solar generating capacity over the next decade, to help fill a huge power gap in the country.

Five hundred million people today do not have electricity in the country. That's nearly half the population. And even places that are hooked up to the grid can face daily blackouts.

Dr. Harish Hande, founder of the Bangalore-based solar company SELCO, says the need for energy is urgent, and not just so people can run their businesses or light their homes.

"It's very important from a governance point of view, India's social stability point of view, that we need to provide basic needs," Hande says. India's economy is booming, but conventional sources of electricity just haven't been able to keep up with the growth in demand in India. That's one reason Hande spent years trying to convince local banks in Karnataka to offer small loans to rural families for renewable energy systems. In recognition of his efforts, Hande recently was awarded the prestigious Magsaysay Award, sometimes called the Asian Nobel prize.

Hande says solar lighting can have a profound emotional impact on the poor.

"A day laborer once told me that you would not understand what it actually means after a hard day's work coming back to a house which is dimly lit," Hande says. "The mood which is already down goes down deeper. Once you see bright light, it's a different feeling. It's a different way of life where you look forward to tomorrow. He says 'I'm willing to pay for that.'"

Hande says many rural Indians are willing and able to pay for solar and other renewable sources of energy, if the cost can be spread out over time. That's where the bank loans come in. Silk farmer Manjunath's solar system cost $400 to install. That's more than he would have been able to afford at once, but with the loan, he pays less than $7 a month.

Dr. Ashok Gadgil, an Indian physicist who's now director of the Environmental Energy Technologies Division at the Lawrence Berkeley National Lab in California, says India's critical shortage of conventional electricity has created a big niche for solar power. "Acute electricity shortage means blackouts, and blackouts mean lost income and lost business," Gadgil says. "So there are many, many opportunities where photovoltaic electricity for economically productive uses is viable in India even at the current prices."

And the technology is starting to catch on in Karnataka. Silk farmer Manjunath says he was one of the first in his neighborhood to install the panels, but that word travels fast here, and more than 100 households have followed suit.

And the electricity isn't just benefiting local businesses. On a recent afternoon a group of energetic teenage boys gathered around the solar panel on Manjunath's roof after school. The boys say they stick around Manjunath's house during the evening hours to finish up their homework under the lamps.

"With solar power," says one of the boys, "I can study continuously without stopping. And it doesn't matter if there's a power cut at night."