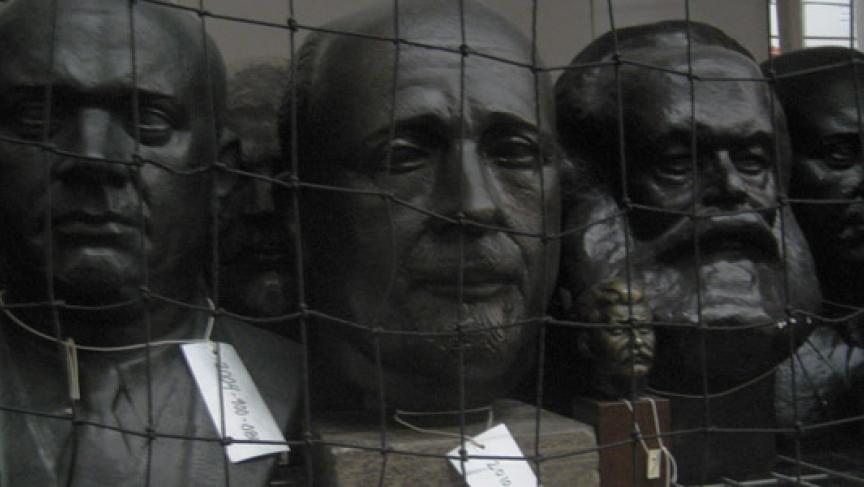 Statues of high-level Communist officials sit on a shelf in the collection of the Wende Museum with an earthquake net. (Photo: Matthew Brunwasser)

Geo Quiz Preserving the Cold War in Sunny California By Matthew Brunwasser â?? January 4, 2012 â?? Post a comment Statues of high-level Communist officials sit on a shelf in the collection of the Wende Museum with an earthquake net. (Photo: Matthew Brunwasser) Statues of high-level Communist officials sit on a shelf in the collection of the Wende Museum with an earthquake net. (Photo: Matthew Brunwasser) Play in New Window | Download An unusual museum of Cold War history is on our Geo Quiz radar for Wednesday. It has a collection of everything from East German blueprints to Soviet artwork. The museum's most spectacular exhibit is probably its portion of the Berlin Wall. It is the biggest chunk of the wall anywhere outside of Berlin. So where exactly is this museum where all this Cold War stuff is amassed? Hint: It is nowhere near Eastern Europe. It is within the heart of "Screenland" not the heart of the old continent. The Wende Museum is located in Culver City, a suburb of Los Angeles, Calif. For many scholars and historians, the Wende is a treasure trove of unusual objects from East Germany and Eastern Europe, which you won't find in many other archives. The World's Matthew Brunwasser recently visited the museum. The Wende ("Turning point" in German) Museum offers the rich resources of its Los Angeles-based collection to visitors, scholars and exhibitions. Almost 6,000 miles away from the divisive historical debates in Berlin, the Wende hopes to preserve selected physical remains of the Cold War in order to inform present and future generations about its legacy. An anonymous business park in sunny southern California is the unlikely home for this Cold War archive. It's hard to imagine anywhere farther away from the emotional debates about Europe's painful past, but Museum director Justinian Jampol says that's exactly the point. "We wanted to have a archive away from it all, to be able to begin to preserve the materials for future generations," says Jampole. Europeans have long been ready to move on, so saving the material culture of the unpleasant era isn't especially high on anyone's list. Jampol says the museum sends out scouts across Eastern Europe looking for art and artifacts, including Communist-era statues about to be melted down for scrap. "That happened up until about a year ago," Jampole says. "We have a 10 foot bronze sculpture, by Bondarenko, one of the very important Russian artists, that was still being melted down. And we got a call saying that this is available and we bought it for the price of the bronze plus five percent." Preserving the history of political, cultural and personal life, the Wende collects materials you won't find in a typical historical archive. "Ranging from furniture to blueprints to design material, artwork, menus, erotika, photo albums, journals, diaries," Jampole says. The collection also includes pop music, like the Puhdys, one of East Germany's most popular rock bands. "This is dissident artwork, this is from perestroika in the 80s, critical of both Lenin and Stalin, when the process started of coming to terms with the past," says Jampole. "In fact, this is one of my favorite pieces…" One of the iconic pieces is a bust of Lenin which once stood in Leipzig, the Tahrir Square of East Europe back in the tumultuous days of October 1989. "It was painted to look like a clown using pink and green florescent paints," Jampole says. "As the main figure of the ideology, if you could paint him like a clown, what next? Where does the state stand? In fact, one month later to the day, the Berlin wall collapsed." The main archive has about 75,000 items in its supermarket-sized facility. Many might find this enormous and neatly organized and cataloged collection of historical bric-a-brac — a warehouse full of old junk. Scholars find it a precious resource of valuable information about the minutia of daily Cold War life. But outside academia, the Wende has another life, trying to make the Cold War resonate with the public today. It is a living museum after all. The Wende organizes public events like one celebrating the anniversary of the Berlin wall coming down. The Wende built a replica across Wilshire Boulevard – dividing LA for a night into west and east. One current exhibition displays original surveillance equipment of the Stasi, or East German secret police. The idea is to provoke debate about contemporary surveillance of American citizens. While Europeans try to put the Cold War behind them, the Wende is trying its best to give life to the memory and the lessons learned.