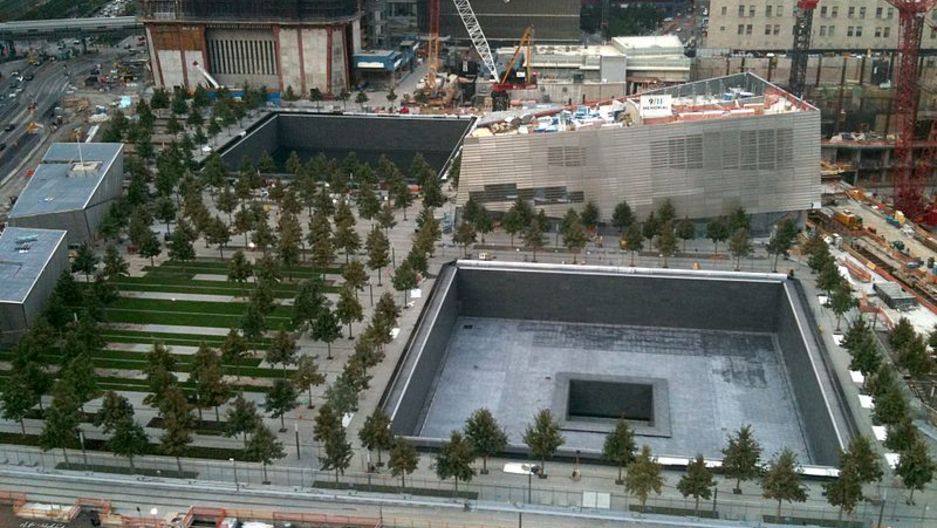 The complete National Sept. 11 Memorial and Museum in Lower Manhattan. The memorial is finished but construction on the museum continues. (Photo by Cizzybone via Wikimedia Commons, cc-by-sa.)

When he heard about the attacks, he rushed to Ground Zero, where he died trying to rescue others. His actions were cited in the Patriot Act as an example of Muslim-American valor.

And yet, if you go to the 9/11 Memorial at the World Trade Center site, you won't find Hamdani's name on the list of first responders who died in the attack. Instead, you'll fin his name on a list, off to the side, of individuals with a loose connection to the attacks.

Talat Hamdani, Hamdani's mother, thinks her son is being overlooked because of his Muslim faith. Talat Hamdani said when her son, also a trained paramedic, rushed to the scene of the attack, he was viewed as a potential terrorist attacker. His picture was circulated and law enforcement were told to detain him for questioning.

"The main factor was he was a Muslim by faith. That made them look into him suspiciously because the police department said they did not tell him to go down there, and neither did Metrocare. He responded voluntarily," Talat Hamdani said.

When Hamdani's body was found in the wreckage, the New York Police Department quickly changed their minds and called him a hero.

But his name still isn't listed with the other dead 9/11 first responders — and not as an NYPD cadet.

"I've been speaking to the memorial people since then, 2.5 years, I wrote to President Obama, I wrote to (Sen. Chuck) Schumer, I spoke personally to Sen. (Harry) Reid. Whatever was in my power, whomever I could reach out to," Talat Hamdani said, as she began to choke up. "And then this May, President Obama invited me to meet with him after the killing of Osama Bin Laden."

At the meeting, Talat Hamdani said, she met with 9/11 Memorial President Joe Daniels and showed him the letter she'd received from the New York Police, acknowledging her son's service. She said Daniels looked at the letter but said the memorial had its own policies and walked away.

Paul Brown, a spokesman for the New York Police Department, told The New York Times that Hamdani was left off this list of first responders because he was still a cadet and not yet a full officer.

Talat Hamdani says that in a time of Islamaphobia, it would be in the best interest for the NYPD to hold up her son as an example of the way it embraces Muslim-Americans. The best way to do that, she says, is to identify him as a first responder.

"That's where he belongs. That's why he went down there," she said.