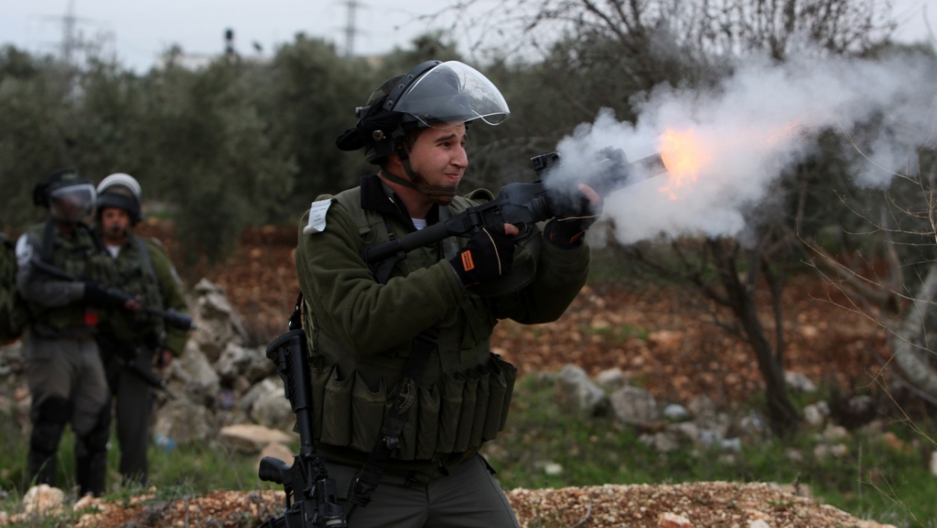 An Israeli soldier fires his weapon at Palestinian youths during clashes following a protest against Israel's controversial separation barrier in Qalandia, near the West Bank city of Ramallah, on Dec. 30, 2011.
Credit: Abbas Momani
Share

JERUSALEM — The first meeting between Israelis and Palestinians in almost a year-and-a-half concluded after three hours with a promise to meet again, next week. Same subject, same place.

Chaperoned by representatives of the Quartet — the United States, the United Nations, the European Union and Russia — the two parties met up in the Jordanian capital of Amman amid floor-level expectations of any possible progress to be made on the subject of conditions for renewing negotiations.

The prospect of progress, or even talks, on substantive matters of conflict between the two parties is not yet on or anywhere near the table.

Palestinian chief negotiator Saeb Erekat and the Israeli envoy and chief negotiator Yitzhak Molcho were joined at their first meeting, by all accounts a session of pleasant small talk between two men who have known each other for a long time, by Jordanian Foreign Minister Nasser Judeh, the session’s host, who allowed that the encounter had been "positive."

The news of the renewal of negotiations was received with impassive inattention in both Israel and Palestine, where top headlines of the day focused on a local scandal, touching Jews and Arabs alike, in which Saudi hackers stole the identities of more than 15,000 credit card users who have bought coupons from discount sites.

Other items capturing local attention was the cliffhanging result of the Iowa caucuses, which is widely understood in the region to carry significantly more weight than the talks when it comes to determining the future of the region, and two abandoned cars that were set on fire in Jerusalem last night, in an apparent act of Jewish nationalistic vandalism.

More from GlobalPost: Even good news is bad news for Israel

On his must-hear morning news program on Israel Army Radio, veteran journalist Razi Barkai asked Israel’s channel 10 Arab Affairs analyst Oded Granot, "So, there in Amman, in the room, are they as uninterested in the talks there as we are over here?”

Granot seemed to shift uneasily. “Well, these are people who have known each other for a long time, they know each other, they are seeing each other now for the first time. ... We might know more next week.”

Claudio Pagliara, the chief correspondent for Italian RAI TV who has been observing and covering the region for a decade, referred to the side show in Amman as “funny fake talks.”

Locally, no one was really looking.

More from GlobalPost: A UN agency votes for Palestinian statehood. So what?

In Washington, State Department spokeswoman Victoria Nuland said, “What's most important is that these parties are talking. We want to see what the results are before we get ourselves too formalistic here.” According to Nuland, the US has been "seeking to have them meet face to face, and we were encouraging them to make concrete proposals to each other.

"What we want to see is where the parties come out after this round. We are very grateful to Jordan and particularly to Foreign Minister Judeh for bringing the parties together not only to meet with the Quartet envoys as they have been doing, but also to meet with each other in a face-to-face meeting.”