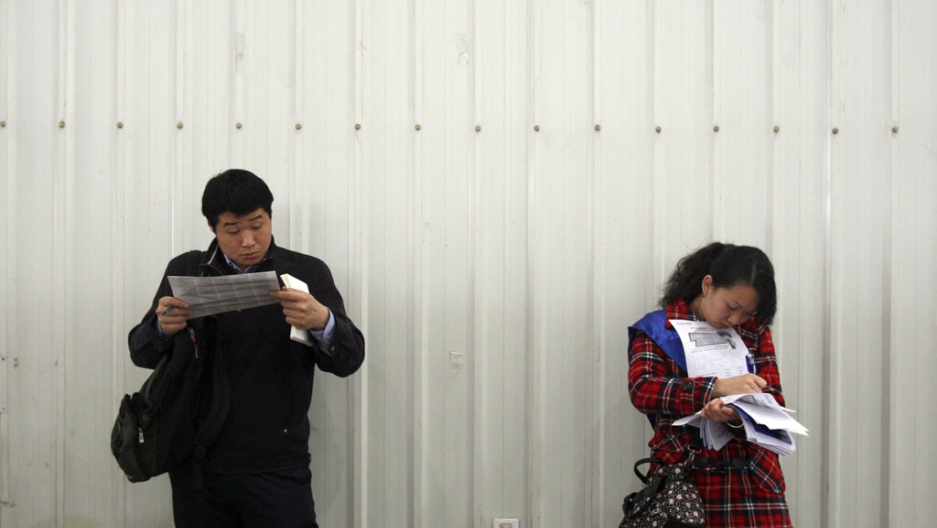 BANGKOK, Thailand — From sleep to social lives, there is little Asia’s most upwardly mobile students won’t sacriﬁce for education. Though they belong to the so-called “Asian Century,” American colleges remain the premier destination for the elite from Shanghai to Singapore to Seoul.

The path to US college acceptance, however, increasingly compels students to sacriﬁce their integrity. For the right price, unscrupulous college prep agencies offer ghostwritten essays in ﬂawless English, fake awards, manipulated transcripts and even whiz kids for hire who’ll pose as the applicant for SAT exams.

“Oh my God, they can do everything for you,” said Nok, 17-year-old Thai senior in her ﬁnal year at a private Bangkok high school. (She asked GlobalPost to alter her name for this article.) “They can take the SAT for you, no problem. Most students don’t really think it’s wrong.”

Among Asian high society, and particularly in China, parents’ obsession with sending their offspring to US colleges has given rise to a lucrative trade of application brokers. Depending the degree of assistance, families can expect to pay between $5,000 and $15,000.

“The parent says, ‘My kid needs this GPA but, frankly, his scores aren’t that strong.’ Then the unscrupulous agent says ‘Don’t worry. We’ll ﬁgure that out,’” said Tom Melcher, chairman of Zinch China and author of a Chinese-language book on choosing American colleges.

A 250-student survey by Zinch China, a Beijing wing of the California-based Zinch education consultancy, suggests college application fraud among Chinese students is extremely pervasive. According to the survey, roughly 90 percent of recommendation letters to foreign colleges are faked, 70 percent of college essays are ghostwritten and 50 percent of high school transcripts are falsiﬁed.

“For the right price,” Melcher said, “the agent will either fabricate it or work with the school to get a different transcript issued.” Admission into a top 10 or top 30 school, as deﬁned by the US News & World Report, can bring a $3,000 to $10,000 bonus for the agent, he said. The magazine, Melcher said, is commonly confused in China for an official government publication.

Demand for such agents is high and getting higher. Rapid economic growth across China and other parts of Asia has sparked an explosion in foreign students hoping to secure their ascent with a Western diploma.

Chinese citizens currently account for more than one in ﬁve foreign students studying at US colleges. Nearly 158,000 Chinese students are enrolled at any given time, a full 300 percent jump over mid-1990s numbers, according to the Institute of International Education.

Chinese, Indian and South Korean students comprise roughly half of America’s foreign college student population. Vietnam has sent 13 percent more students to the US within the last year, and Malaysia has added 8 percent, the institute reports.

But many American college officials are oblivious to the application ﬁx-it men these foreign students may have paid back home. Worse yet, remaining blind to the deception is often ﬁnancially incentivized.

America’s economic downturn has drained the state tax coffers that provide a funding lifeline to many US colleges. Many schools have resorted to unpopular tuition hikes. But many are also courting wealthy foreign students whose families gladly fork over money for housing and tuition along with out-of-state or even out-of-country fees.

Rice Fields Of Asia: From Above and Below (PHOTOS)

“International students are seen as a source of revenue ... and the trend has exploded in the past two years,” said Dale Gough, international education director for AACRAO, the American Association of Collegiate Registrars and Admissions Officers.

Foreign students, through tuition and living expenses, contribute $2.1 billion to the US economy, according to the US Commerce Department. “In short,” Gough said, “they help the bottom line.”

Excuses abound for ignoring fraudulent applications, Gough said. Some assume that kids who cheat will inevitably ﬂame out anyway and never score a degree. Some admissions officers, he said, contend that “that’s just the way it’s done over there.”

His association publishes a guide to deciphering foreign scores, the only one of its kind, but fewer than 500 of the 3,500 institutions represented by AACRAO bother to buy a copy.

“Translating foreign grades into a GPA system is meaningless,” Gough said. “They attempt to do it anyway.”

Gough fears that universities’ lax standards, and focus on big foreign tuition payments, will eventually undermine the pedigree of an American diploma. The damage, he said, would be nearly impossible to undo.

“This scenario spells disaster,” Gough said. “Even if a lot of the students who cheat are bright, and they go on to succeed, is this fair to American students? Or [to] the foreign students who play by the rules?”

While America has ceded manufacturing power and foreign inﬂuence to China, an American degree remains the gold standard of educational prestige. Nok, who is currently applying for colleges abroad, never considered applying to universities in Asia.

“Students who study in America are elite, the privileged,” said Nok. “It shows you’re smarter than the others.”

But like most Asian students, Nok has felt baﬄed and overwhelmed by America’s complex application system.

“Here, you take a big test one day and report the score. That’s how you ﬁgure out where you’ll go to college,” she said. “The Americans are different. They want to know the big picture. All these essays. All this stuff about your life.”

Asian families unfamiliar with the process, he said, are justiﬁed in seeking an agency’s help with application strategies and tutoring to build the skills US colleges demand. But Russo’s refrain to parents, he said, is that kids who can’t write their own essays are likely to burn out once enrolled in America.

“Some consultants will promise the world ... and they’re fundamentally preparing students to fail,” Russo said. “Beyond fabricating an essay, they’re fabricating a whole life story. Students will start to believe in the lie. It’s wrong.”

The allure of America’s universities, and the pressure-cooker drive to succeed among Asia’s expanding upper class, will continue to propel Asian students into American schools. Many Chinese teenagers applying abroad, Melcher said, are the sort of highly motivated students colleges desire.

“Chinese kids are typically great,” Melcher said. “They’re not at the tailgate parties drinking. They’re busting their butts. Failure is not an option.”

But college application fraud will continue, he said, so long as the risks are low and the rewards are so high. His consultancy suggests interviewing all Chinese students via online video chats, conducting spot tests in English, and hiring a mainland Chinese staffer in the college’s home office.

“Frankly, I feel really bad for Chinese families who are trying to be honest,” he said. “They’re driving 55 while everyone’s zooming past them. After a while, they throw up their hands and say, ‘Fine, I’ll speed up.’”