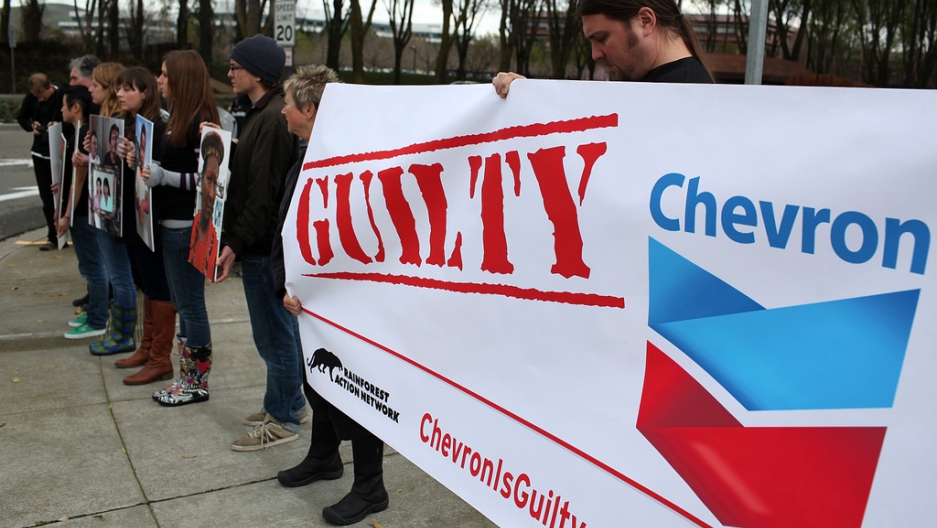 Protestors hold signs during a demonstration outside of the Chevron headquarters on February 15, 2011 in San Ramon, California.
Credit: Justin Sullivan
Share

Chevron has lost its appeal to overturn an $18-billion fine demanded by the government of Ecuador, which holds the oil company responsible for pollution in the Amazon River basin dating back 20 years.

Chevron denies responsibility and says the case against it is based on fraud.

Yet three appeals judges in the Amazonian city of Lago Agrio yesterday upheld a 2011 ruling that Chevron should pay damages and "moral reparation" to the Ecuadorean authorities, the BBC reported. A court had originally set the fine at $8.6 billion, but more than doubled it after Chevron refused to make a public apology.

More from GlobalPost: Chevron must pay for Amazon damage, US court says

At roughly one-third of Ecuador's GDP, the $18 billion now demanded makes this one of the most expensive environmental suits in history, according to the Financial Times.

The case was brought on behalf of 30,000 Ecuadoreans from the Amazon River basin, who accuse Texaco – which Chevron took over in 2001 – of dumping more than 18 billion gallons of toxic materials into unlined pits and rivers between 1972 and 1992, the BBC said.

Chevron argues that Texaco subsequently cleaned up its share of environmental damage, and obtained a release from the Ecuadorean government in 1998 absolving it of further responsibility. Chevron also claims that investigators have found no scientific evidence of the persisting environmental, health and social damage the plaintiffs describe.

The legal battle over the dispute has been long and bitter, with Chevron accusing the plaintiffs' lawyers of fabricating evidence and bribing or intimidating judges. The company has taken its allegations of misconduct to US and international courts, and said after yesterday's ruling it would "continue to seek to hold accountable the perpetrators of this fraud."

More from GlobalPost: Chevron says it will clean up Brazil spill

Ecuador's president, Rafael Correa, told national radio he was "very content" with the ruling, saying "justice has been done."

"There is really very little that Ecuador can go after in the country and Chevron doesn’t really have any material assets there."

According to Hinton, the plaintiffs plan to seek enforcement actions in other countries where Chevron has assets.

More from GlobalPost: Bribery accusations in case against Chevron