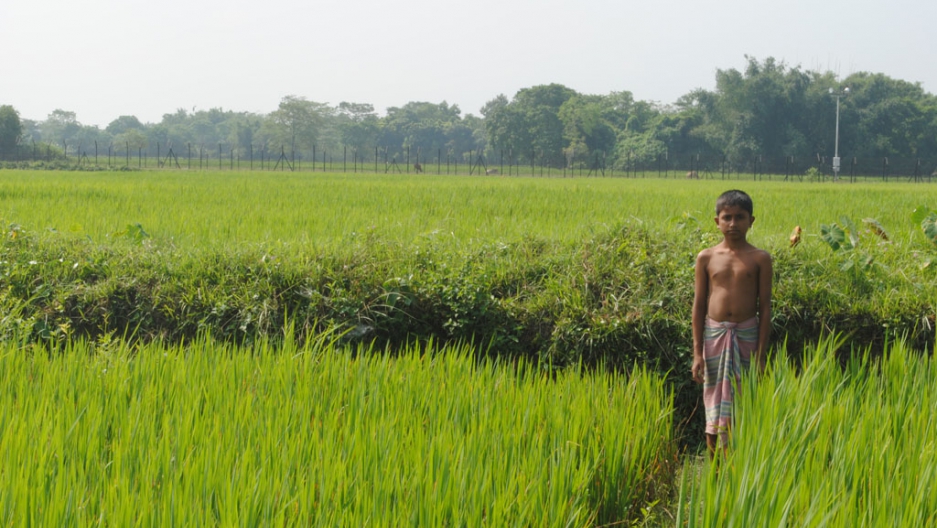 Anis Ahmed, 9, works on his family’s farm every day on the Bangladesh side of the Bangladesh-India border near the northern village of Amgaon. He complains that the floodlights along the border beam directly into his home, making it difficult to sleep at night.
Credit: Maher Sattar
Share

RANGPUR, Bangladesh — “If they see me talking to you, they’re going to give me a lot of trouble,” says Abdul Rahim.

Standing at the very edge of his property on the Bangladesh-India border, the 48-year-old Indian farmer is half a step away from illegally crossing into the Bangladeshi village of Chander Haat. But it’s not the possibility of getting caught trespassing by Bangladeshi border guards that worries him.

Behind Rahim, a couple hundred meters into the Indian side of the border, is the world’s longest — and bloodiest — barbed wire fence.

Dubbed the “wall of death” by locals, the 4,000 km barrier spans the length of the fifth-longest border in the world, and is manned by India’s Border Security Force (BSF), whose guards kill both Bangladeshis and Indians with impunity.

Shiva Rules: Will the elderly bring down India?

Rahim claims the BSF routinely harasses him and has occasionally beaten him on suspicion of aiding or sheltering illegal Bangladeshi migrants and smugglers.

It's a tense border. Despite India helping Bangladesh gain independence in 1971, relations between the two countries have remained strained since the 1947 partition of India, when the subcontinent was split along religious lines, creating East Pakistan where present-day Bangladesh is. Partition resulted in a bloodbath, with over 1 million killed in the space of a few months and more than 10 million Hindus, Muslims, and Sikhs displaced in one of the largest mass migrations in human history.

Little progress has been made over decades between the two countries on hot-button issues like smuggling, supplying arms and refuge to Indian insurgents, and control of the numerous rivers that flow through both countries.

But the standout crisis dominating Indian discourse is undocumented migrants.

Official estimates are that there are 2 million undocumented Bangladeshi migrants in India. A number frequently reported in India media is 20 million.

Like Mexican undocumented migrants in the United States, their Bangladeshi counterparts are the favored scapegoats of the Indian right — blamed for unemployment, crime, terrorism, "low-key Talibanization," and "disturbing our indian sex-ratio statistics."

This has created a situation where many say India’s border guards are trigger-happy.

On Jan. 7, 2011, Felani Khatun and her father arrived at the barbed wire a little after the early morning call to prayer had rung out from a nearby mosque. Dressed up in traditional bridal wear and wedding jewelry, the drowsy 15 year old had fallen asleep several times during their overnight journey to the border and could barely keep her eyes open.

Felani, born in India to parents who were undocumented migrants there, was returning to Bangladesh to get married. But it was daylight now, and Felani’s father Nurul Islam was afraid.

The local smugglers he had paid Rs 3000 ($70) to help him and his daughter across insisted however that everything was fine, and the two began to climb up the ladder that had been arranged for them.

Nurul Islam made it over successfully. Moments later, as Felani reached the top of the 2.5m high fence, Indian border guards who had spotted them came running out and shot her dead from close range.

“[The BSF shot] without any warning. I don’t understand why they didn’t shout anything,” remembers Nurul Islam, who has been relocated with the rest of his family to the Bangladeshi village of Ramkhana, near where his daughter died. “I wish they’d said ‘stop.’ If they’d just said ‘stop’ she would’ve been saved.”

Felani’s lifeless body hung from the fence for five hours, in full view of Bangladeshi and Indian farmers living nearby. Eventually, the BSF slung her hands and feet onto a bamboo pole and took her away.

It was over 30 hours before her body was handed over to Bangladeshi authorities and returned to her father. “They took her jewelry,” Nurul Islam said, sardonically.

A photo, first published in Indian newspaper Anandabazaar, of Felani’s corpse hanging from the fence sparked a huge uproar in Bangladeshi media. The Indian Home Minister P. Chidambaram announced during a visit to Dhaka in July that the BSF would use non-lethal weapons, and that they would no longer shoot at civilians under any circumstances.

Six months later the deaths on the border continue to pile up.

Human rights group Odhikar accuses the BSF of killing over 1,000 Bangladeshis in the past decade. The BSF themselves admit responsibility for the deaths of 364 Bangladeshis and 164 Indians since 2006.

That was when their government began constructing the fence, inspired by Israel’s West Bank barrier.

But neither the barbed wire nor the extrajudicial murders have been successful in stopping a lucrative, illicit trade in cattle.

Cows in Bangladesh sell for three to four times what they fetch in India, and resourceful traffickers have devised new, brutal ways to get around the obstacle.

Rahim, the Indian farmer who witnesses this happen almost nightly, describes the procedure: “They use ramps to get the cows up to the middle part of the wire fence. The wires here are a little bit further apart than the rest of the fence. They loosen the wires a little bit more, then they bind the legs and the mouth of the cow, haul it up the ramp and pass it through to the other side.”

“It takes 10 minutes to get 50 cows through,” says Rahim, “But it’s not easy to get 10 minutes. The smugglers always follow the BSF, keeping an eye on them, waiting for an opportunity.”

The BSF guards aren’t cartoon villains, and Rahim is aware that they are doing a dangerous job.

“The smugglers are reckless people,” he says, “they don’t hesitate to attack the BSF. They are armed with sickles, knives, and they threaten the BSF. They say ‘leave us alone if you fear for your life, we’re here to die anyway’.”

Though the anti-smuggling and anti-immigration efficacy of South Asia’s Berlin Wall is debatable, its impact on those living nearby is not.

Bangladeshis have predictably bristled at the prospect of being corralled in by their giant neighbor, which surrounds them on the west, north, and east, and which they have always been a little bit paranoid about.

With a growing population of 150 million packed into an area smaller than Iowa, the fence is also making many Bangladeshis claustrophobic.

“A barbed wire fence is a psychological expression of hegemony. They have surrounded the people of Bangladesh on three sides with barbed wire,” said Adilur Rahman, the general secretary of Dhaka based rights group Odhikar, “High powered floodlights, barb wire… it looks like a World War II concentration camp.”

The floodlights beam directly into the home of 9-year-old Anis Ahmed, who complains that they are so bright he has trouble sleeping at night.

Anis works on his family’s farm every day on the Bangladesh side of the border near the northern village of Amgaon. Their land goes right up to the border, where lush green rows of rice plants imperceptibly switch from Bangladeshi to Indian.

According to international regulations, the fence cannot be closer than 150 meters to the actual border, so the actual fence falls behind rows of Indian crops.

There are no clearly visible signs demarcating the exact point where Bangladeshi soil becomes Indian. Locals are simply expected to know where the line is.

Most of them do, and they stay away. But the precocious Anis and his 11-year-old cousin Shohir Jamal often walk across it to examine what lies beyond the fence.

“We go up to see the barbed wire fence,” says Anis, “When we go up to it they [the BSF guards] mock us, scold us. They say ‘Ei Bengali admi, bhago giya, bhago giya [hey Bengali, go away].’ They swear a lot at us, but things we don’t understand really.”

The children here are growing up surrounded by an atmosphere of hostility and suspicion. Everyone in their village is viewed as a potential smuggler or an accomplice of smugglers.

Many are. People here are very poor, and supplementary income is precious.

Manik, the local schoolteacher, was recently arrested and given three years detention by the BSF during his first foray into cattle smuggling. Akbar Ali, an elected member of the local government here, has just returned having completed his own three-year term for trafficking cows.

Suspicions run deep. During the day Anis and Shohir work side by side with the Indian farmers like Rahim, whose crops fall between the border with Bangladesh and the barbed wire fence. The proximity, however, does not imply interaction.

“They don’t talk to us. The BSF don’t want them to have a good relationship with Bangladeshis,” says Anis, “They [the BSF] worry that they’ll end up helping people cross the border.”

Rahim regrets this new distance with once close neighbors.

“When we were children we used to play together every day,” he recalls. “We used to eat at each others’ houses. I went to school in Bangladesh.”

Because the fence had to be built 150 meters within Indian territory, Rahim and more than 100,000 other Indians have found themselves on the wrong side of the barbed wire.

Rahim is cut off from the rest of his country, trapped within a slice of land about as wide as an airport runway.

Children frequently miss school because they arrive after the gate has been closed. Rahim’s daughter lives with a relative 40 kilometers behind the wire. He estimates that he sees her only once in five months or so.

As he speaks, a woman comes wading through a stream on the Bangladeshi side of the border. She is carrying multiple cell phones in her hands.

“There’s no electricity in our houses,” explains Rahim, “We’re cut off from the electrical grid. So we have to sneak over to Bangladesh when the guards aren’t looking to charge our phones.”

“The wire fence makes us feel like prisoners,” he said.

One day, when he has saved enough, Rahim says he plans to move to the other side of the fence. His expectations aren’t high for what may be in store there, but at least he will have ended his status as collateral damage of a stalemate between nation-states.