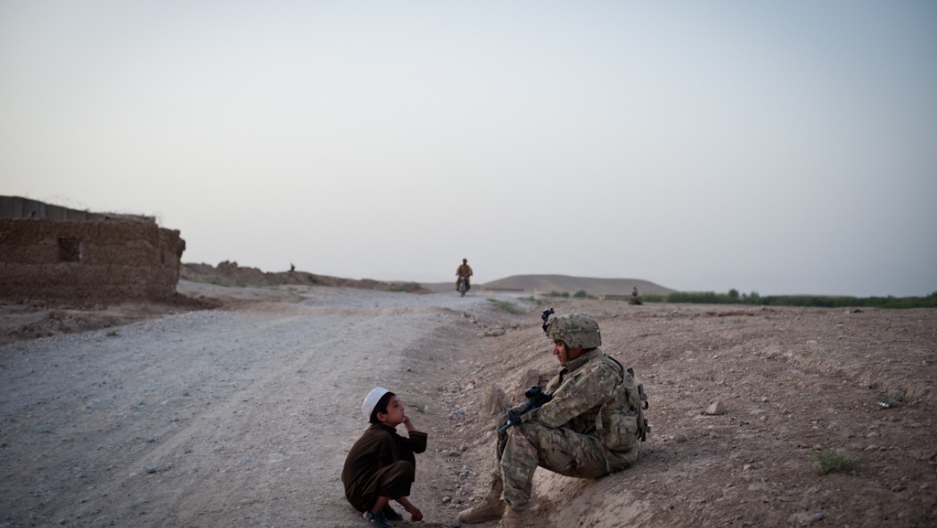 Sgt. Oscar Cuellar and an Afghan boy consider each other for a moment in the outskirts of Qalat, the capital of Zabul Province.
Credit: Ben Brody
Share

The foreigners Baheer referred to are likely to be US officials, though he refused to specify during an interview Tuesday with GlobalPost from his home in Islamabad.

“The meeting in itself was progress. It was not so diplomatic and the discussion was very open. It was important,” Baheer, who returned on Sunday from Kabul, said.

The meeting and a similar one two months ago are part of a more institutionalized, higher-level and better organized effort between the three sides to attain peace in Afghanistan in the wake of the withdrawal of American and NATO troops in 2014.

More from GlobalPost: It's been a bad year for Afghanistan

“The time is running [out] and we’re approaching a crucial stage. That’s the feeling of [the] three sides,” he said.

Meanwhile, in a separate development, the Taliban on Tuesday announced that it plans to open a political office in Qatar that may allow for formal talks with coalition forces in Afghanistan, after longstanding persistence that such talks were not even under consideration. But analysts caution that this does not automatically signal the start of a peace process, or anything close to it.

There is a decade of distrust that is dampening the prospect of successful and conclusive talks with the Taliban and insurgent groups like Hezb-e-Islami Gulbuddin, Baheer said. He believes that the long-term Afghan-American strategic agreement that is now under discussion between the two countries may lead to a US presence beyond 2014.

“We smell that they’re going to stay and have military bases. It’s a big concern,” he said.

The US embassy in Kabul did not confirm or deny the talks. A statement issued by the embassy said: “We have many contacts across Afghanistan and the region. As a matter of policy, we do not discuss the details of those contacts."

With its two faces, Hezb-e-Islami Gulbuddin — founded in 1977 by Gulbuddin Hekmatyar, who still leads the group and who served as Afghanistan’s prime minister for about a year in 1993 and 1994 — is hard to grasp itself.

It’s represented in the Afghan parliament and is, after the Taliban, the second-largest insurgent group in Afghanistan. But for Haroon Zarghoon, a spokesperson for Hekmatyar, that’s not a contradiction.

“We’re not aiming to fight with the Afghan parliament; our fight is with the Americans,” he said in Peshawar.

Hezb-e-Islami Gulbuddin’s political wing has 65 members in parliament and holds other official posts, Zarghoon said. One of them is said to be the minister of economic affairs, Abdul Hadi Arghandiwal. Thomas Ruttig of the Afghanistan Analysts Network said that it was difficult to verify this number, but “in Afghanistan people say once a Hezb-e always a Hezb-e, and that refers to Hezb-e-Islami.”

Hezb-e-Islami Gulbuddin’s military wing aims its weapons — leftovers from the war against the Russians between 1979 and 1989 — at foreign and Afghan forces. “Since a foreign army has entered our country, Jihad is an obligation for every Afghan, like saying one’s prayers,” the spokesperson said.

“In one province we gave the names of a hundred of our people and they hired them in the force. We get exact reports from them [about the movement of foreign troops],” he said, while boasting of the number of US troops the group’s military has killed.

Afghan villagers help the group’s fighters as they’re out in the field, while the wealthy and landowners donate money for Hezb-e-Islami Gulbuddin’s expenses, Zarghoon said. Financial support also comes from foreign troops, though not American, in return for not getting attacked, he said. This is not an unusual practice in Afghanistan.

Gulbuddin's Hezb-e-Islami has no lack of battle experience. In the 1980s, Pakistan’s Inter-Service Intelligence agency, known as ISI, and Saudi Arabia’s General Intelligence Department funded the group generously to fight against the Soviets.

“He turned out to be the most dynamic, aggressive, well-organized and kept a very tight discipline on his party,” said Hamid Gul, who as head of the ISI from 1987 to 1989 was in close contact with Hekmatyar.

Pakistan abandoned the group in the 1990s after the war against the Soviet Union was already won and annoyance with the group’s excessive violence took the upper hand, analysts said.

Baheer said that if Afghans vote the Taliban into power, Hezb-e-Islami Gulbuddin would accept it. But Afghans doubt it, analysts said.

“Many Afghans believe that he’s power hungry and would never accept anyone as a leader of Afghanistan except himself,” Ruttig said.

Apart from this, the Taliban and Hezb-e-Islami don’t see eye-to-eye on elections or governance, Baheer said.

“The Taliban’s approach toward government and the future of Afghanistan is different from our approach. For example, the Taliban don’t believe in elections. His group does," he said.

Hezb-e-Islami already chalked out an election process, which limits the number of political parties to a few by excluding the smaller ones from a second election round if they fail to win more than 10 percent of the votes.

“That will help us in having a united Afghanistan,” he said. It probably wouldn’t harm Hezb-e-Islami Gulbuddin's chances to contest a second round of elections either.

Gul, the former ISI head, said that now only the Taliban leader can call a nationwide meeting that would be acceptable to a majority of Afghans.

“Mullah Omar undoubtedly, unquestionably is the leader of the Afghan nation today,” Gul said. Hekmatyar is marginalized, he said. But some analysts said there is a possibility that Hekmatyar’s group could come back under Karzai’s reconciliation policy.

Baheer warned not to underestimate his group.

“It has deep roots in Afghanistan. No one can ignore it,” he said.