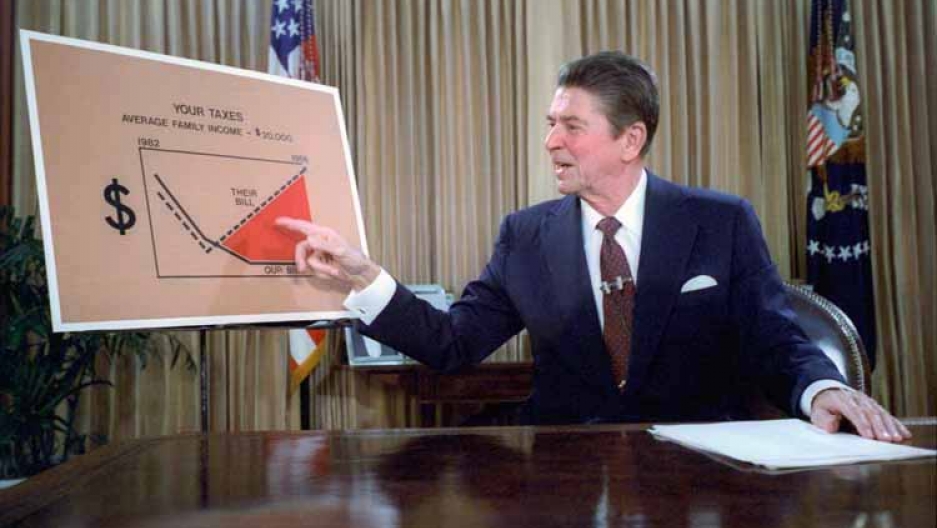 Ronald Reagan, during a televised national address in 1981, reveals his massive tax cut proposal. The next year, however, he actually raised taxes in a compromise with Democrats. (Photo by White House Photo Office via Wikimedia Commons.)

As Republican Presidential candidates enter the voting phase of the primary election season, all of them seem to be battling over who, exactly, is the heir to Ronald Reagan.

Reagan is perhaps the most popular former Republican President and the candidates all are eager to get a little of his popularity to rub off on them. Reagan's popularity is often attributed to the tax cuts he pushed through as president, reducing the top tax bracket from 70 percent to just 28 percent.

But others are pointing out that Reagan actually raised taxes 12 times in his presidency, including during the 1982 recession. Leslie Stahl of CBS' 60 Minutes program took that fact into an interview with House Majority Leader Eric Cantor and got a frosty reception.

"There seemed to be some difficulty accepting the fact that even though Ronald Reagan cut taxes, he also pushed through several tax increases," Stahl said on the program.

When Stahl made that point, Cantor's press secretary angrily interrupted the interview and called Stahl's comments — that he raised taxes — a lie.

Julian Zelizer, professor of history and public affairs at Princeton University, said there's no question Reagan, both as president and governor of California, raised taxes. Income taxes, social security taxes were all raised at varying times.

"He went against his own principles because he realized the need to compromise and the political realities of the period," Zelizer said.

In 1982, during a recession, Congress passed the Tax Equity and Fiscal Responsibility Act of 1982, which Reagan reluctantly signed. The legislation increased withholding on dividends and reduced depreciation deductions, among other tax increases.

"Republicans have done this in the past and the economy then does better," Zelizer said.

A 2006 report from the Treasury Department found that if Reagan's tax increases were introduced today, they'd raise some $300 billion per year — more than what Democrats have called for.

Zelizer pointed out that Reagan also made modest increases in taxes in 1983, 1984 and 1985. Tax increases were part of the Reagan presidency, Zelizer said.

"He was a politician who understood you had to enter into agreements with your opposition and you had to deal with the fiscal realities of government," he added."

Zelizer said Reagan proved that politics and principle could co-exist.

"He had ideological beliefs, he had long-term objectives, but in the process he was also willing to cut deals and take care of governance. I think that's really the lesson of Ronald Reagan," Zelizer said.