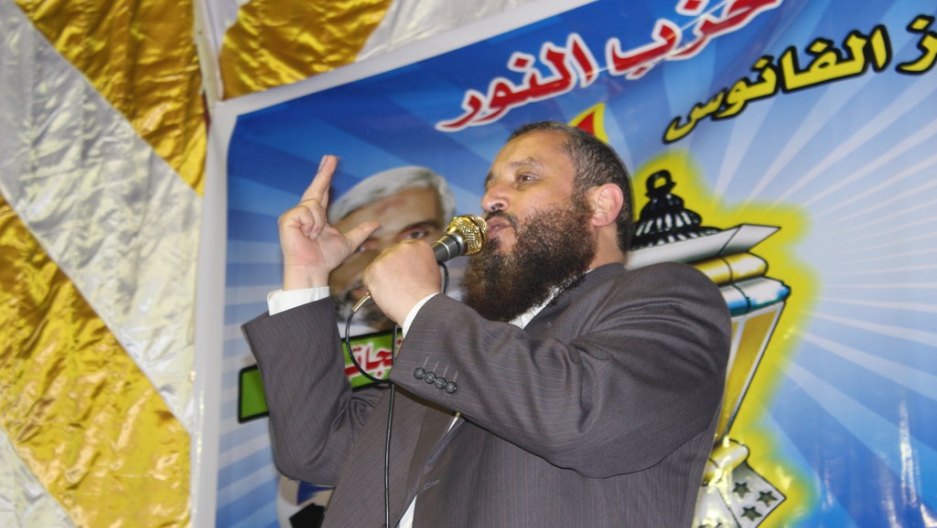 It is not just the talking heads on orthodox Islamic television channels that scare liberal-minded Egyptians — Salafist candidates and their supporters voice similarly conservative views.

“This is the one time that Christians and women will ever be allowed to campaign for the presidency,” says Abu Amr Baheth from Shobra El Khayma. Once the Islamist-dominated parliament implements Islamic law, he believes, only Muslim men will be allowed to become president.

But Salafists feel the media, local and international, have gone too far in characterizing them as radicals.

Maher al Housry and Osama al Fikry are members of the Salafist Al-Nour (“The Light”) Party. The two go everywhere together in a four-door Camry from the early nineties that is nearly ready for the junkyard. The back seat is scattered with campaign posters and the sort of random items that accumulate when working out of a car.

“If we’re not home soon, our wives will be mad,” says Osama as we sit down at a friend’s house in a village outside of Cairo. “They’ve been working and taking care of the family while we’re out campaigning.”

Osama has four children all under the age of 10. “The liberals try to make people scared of us by saying we’ll ban women from working but it’s just another one of the lies they say about us,” he says.

Both the men are from the Qalyubia governorate, and work as real estate salesmen in the underdeveloped, highly populated industrial and agricultural region north of Cairo. Osama is formally trained as an Islamic lawyer and an expert in sharia, and ran as an Al-Nour Party candidate for the Shura Council, Egypt’s upper house of parliament.

“God willing Osama will enter the Shura Council but right now we’re focusing on Al-Nour’s candidates for the People’s Assembly. He’s one of our best speakers,” says Maher, a 31-year-old who carries the honorific “sheikh.” He hasn’t trimmed his beard for two years, in accordance with Islamic law regarding facial hair.

Racing from town to town to attend rallies, meet with party volunteers and shake lots of hands, the pair hope that the Qalyubia district will yield up to 10 seats in the lower house of parliament in Tuesday’s vote. The party faces heavy competition from the Muslim Brotherhood but Al-Nour surprised analysts and pollsters by winning 25 percent of the vote in the first two rounds. Pre-election estimates put the party at 10 percent.

Inside a rented office in Banha, Egypt’s fourth largest city, two aged computers sit on a desk in the lobby and a small and side room is crammed with chairs where members sit after a rally to have tea and talk politics.

“I heard them calling Salafists 'terrorists' in the media again,” says Tarek Ghareib, a teaching urologist at Banha University who also has a private practice. “This area has many Christians so the liberals are trying to scare them from voting for us. But many of my patients are Christians who come to me because they know I will deal with them fairly. They trust me and that‘s why we‘re doing so well.”

Al-Nour attributes its success to grassroots support and voter trust. Nearly every candidate has local hero status for being imprisoned and tortured by the Mubarak regime, which demonized Salafis for decades. Networking was inevitable for the jailed men, crammed 30 at a time into a four meter by four meter room for weeks on end. While that personal network helps, Al-Nour also takes ten Egyptian pounds ($1.65) from every party member each month, with many members donating more to their local offices.

“We didn’t pay a pound from the party account for tonight’s rally,” brags Sheikh Maher, referring to the sound system, generator, lights, and modest catering served at the two-hour event that played out like a one-sided debate. “A local supporter paid for everything.”

At an Al-Nour rally in Banha, party president Emad Abdel Ghaffour made an appearance, telling the crowd, “I’m not going to deal with Israel until they end the occupation of Jerusalem. Not even their ambassador.”

This kind of statement reassures the Salafist base and also causes the press to describe them as “hard-line.” But they are hardly out of step with Egypt‘s conservative society. “We will implement sharia and the country will improve,” says Osama. “The answers for our problems lie in the prophet Mohamed’s teachings and the Quran. This is what all Muslims desire.”

“No taxes will be collected, everyone will pay 2.5 percent of their net income to the Ministry of Zakat,” he says, referring to a nonexistent ministry he hopes the next parliament will create to collect the Islamic charitable offering.

Sheikh Maher criticized the country’s ruling body, the Supreme Council of the Armed Forces (SCAF), and promised reforms. He believes Al-Nour poses a threat to SCAF.

“Al-Nour didn’t go to Tahrir Square in December to protest against their crimes because we know that the Army is waiting for us to slip up so they can put us all in jail,” he says. “But once we get in parliament, justice will be served.”

Maher says the military has kept Egypt underdeveloped for the personal gain of the country’s leadership.

“100 percent of the Suez Canal tolls go to the presidential account,” he says. “The people never benefit, and the aid from the US is spent buying used military equipment that Egypt has to buy spare parts for in deals that high-ranking officers take cuts from.”

While wariness about Israel appears unanimous, many Al-Nour members are unsure of how to proceed with the United States. “Our problem is with the American government, not the American people,” says Hisham Tawfik, an Al-Nour party member from Shobra with a law degree, whose opinion represented the consensus in his area.

“Once the US starts to treat us as real friends instead of President Bush‘s ‘you‘re with us or you’re against us’ attitude, we can maintain positive relations,” he says.

“God willing when we get the zakat, the market price for our gas exports, and the Suez money we’ll have enough left over to send America aid,” jokes Maher. “But for now Al-Nour is only trying to send the message that they believe in a democratic system, freedom of speech and international cooperation.”