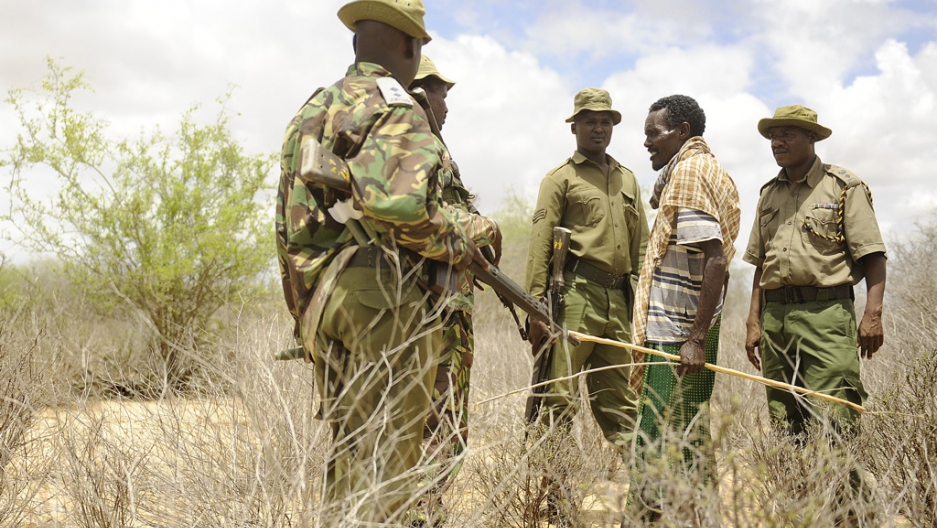 Kenyan security forces talk with a local goat herdsman on October 15, 2011 near Liboi, Kenya's border town with Somalia, during a search for two Spanish aid workers kidnapped on October 14 from Kenya's Dadaab refugee camp. The Spaniards, both logistics officers with the aid group Medecins Sans Frontieres (MSF, Doctors Without Borders), are now believed to be in lawless Somalia. Kenyan forces will pursue gunmen accused of a spate of kidnappings of foreigners across the two nations' border, the internal security minister said on October 15.
Credit: Tony Karumba
Share

The Shabaab continues to feel the squeeze in Somalia as it faces a concerted — and to some extent coordinated — regional military effort for the first time Somalia.

After years in the ascendancy, Shabaab is now fighting on at least three main fronts against African Union soldiers around Mogadishu, against Ethiopian troops in the west and against Kenya's military in the south.

The Kenyan advance has made little progress since it began in mid-October and the AU force has taken years to push the Shabaab out of the capital but Ethiopia dealt the Islamist militia a blow by overrunning the town of Beledwayne at the weekend. It is a key strategic town that will be a handy launchpad for further Ethiopian
advances in the days, weeks and possibly months to come.

A Shabaab leader said his troops were massing outside Beledwayne for a counter-attack but it remains to be seen if the group will live up to the threat.

In the south Kenya says it wants to pries the port town of Kismayo from Shabaab control while commanders of the AU force are pleading for more troops, equipment and money to begin pushing out beyond the city limits for the first time.