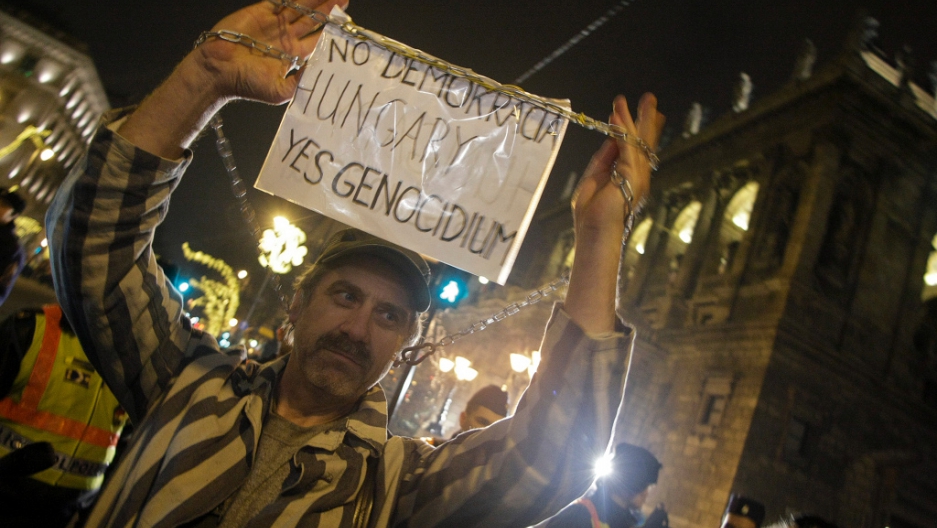 In 2010, Hungary's nationalist Fidesz party led by Prime Minister Viktor Orban won more than two-thirds of the seats in Parliament. Their platform was the creation of a million jobs and major constitutional change.

They completely failed on the first part of the pledge but despite plummeting poll ratings they have rammed home the latter. A new "national law" went into effect yesterday. Opponents say it creates a dictatorship with censorship of a free press and the removal of parliamentary checks and balances on the government. That's why they have taken to the streets.

Beyond angering domestic political opinion, the ultra-nationalist Orban may be picking the wrong fights. The EU and U.S. have both asked that the new law be revoked.

More critically the IMF has broken off talks with the government, which is in need of a bail-out, even though Hungary is not part of the euro. The Guardian summarizes the bad news:

"The country's finances are in such a poor state that just before Christmas the ratings agencies Moody's and S&P downgraded Hungary's debt to junk category. At a government securities auction last week, just 50% of a total offer of €100m were sold at extremely high yields, suggesting that investors had lost faith."

Orban so far is unmoved. Given Hungary's mid-20th century history of hard-right ultra-nationalism, the prospect of more unrest, and more stubbornness on the part of the prime minister is high.