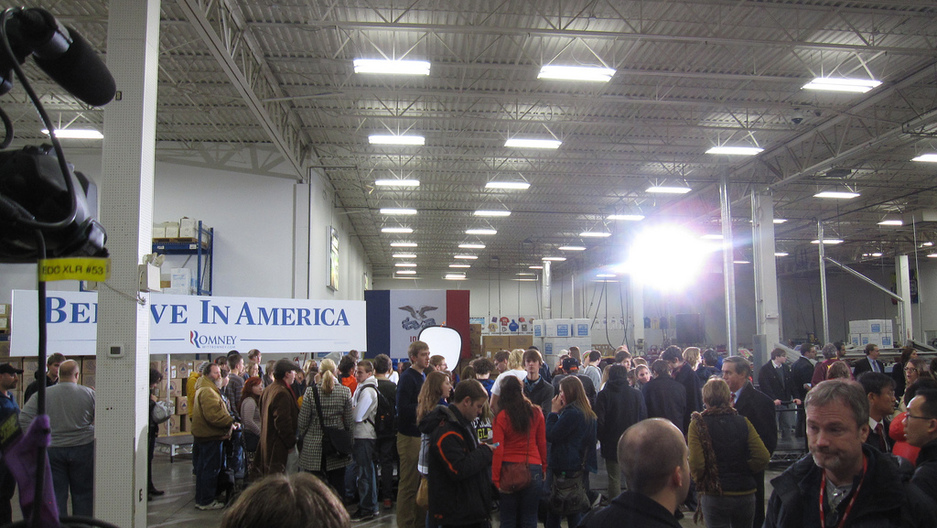 Volunteers prepare for the final moments of the campaign for the Iowa Caucuses. (Photo from Flickr user IowaPolitics.com, cc-by-sa.)

The 2012 election season will officially kick off tonight, though you're forgiven if the 13 debates, $12.5 million in spending an endless campaigning led you to believe that tonight should actually be the final election.

The Iowa Caucuses get underway tonight, pitting Mitt Romney, Ron Paul, Rick Santorum, Rick Perry, Newt Gingrich, Jon Huntsman and Michelle Bachmann against each other in the first fight in the battle to be the Republican Presidential nominee.

Depending on which candidate you ask, tonight's caucusing will either mean everything, or nothing at all. Steffen Schmidt, professor of political science at Iowa State University said it often means a lot, citing the momentum that President Barack Obama and Jimmy Carter got from unexpected victories in Iowa.

"Some years, it is spectacular. Other years, it's a yawn. I think this year it's going to be very important," Schmidt said.

Kerry Jech, senior pastor at New Hope Christian Church and a caucus-goer in Marshalltown, Iowa, will be supporting Gingrich. He lauded his experience as house speaker and said he's the one who can bring the country back to what Jech thinks is the right path.

"I should say I live in a house divided. My wife is going to caucus for Rick Santorum, so we have both of their signs out in the front yard," he said.

Jech said his number two choice is Santorum and his wife's number two is probably Gingrich.

Santorum's popularity has surged of late, in many ways at the expense of Gingrich. Polls have shown that he is in a tight race with Paul and Romney for the top spot in the caucus.

Schmidt said Santorum's rise is in large part because he's assumed the mantle of conservative, Christian, family-values candidate in the race. Romney, on the other hand, is building support among economic conservatives and those who are most concerned about job creation, he said.

"Mitt Romney has been steady because he has the experience in managing a private business, in being the governor of a state," Schmidt said. "I think this year, the reason this has been such a volatile roller coaster is because Iowa Republicans are truly divided among where to put their votes."

Many Iowa voters, however, say they're still undecided about whom to support when they turn out tonight. One recent poll from the Des Moines Register showed as many as 41 percent were undecided.

Jech attributes that to uncertainty among all those except the supporters of Paul and Romney.

"I really think that probably, the 41 percent are going to divide out tonight between Bachmann, Perry, Gingrich and Santorum," he said. "I think that's where their indecisiveness comes. They see four candidates that they like. I don't see Romney and Paul's support increasing that much from what the polls have indicated."

Schmidt, a political expert, called Jech's analysis A-worthy. He added that when voters have a lot of choice, they vote more on impulse.