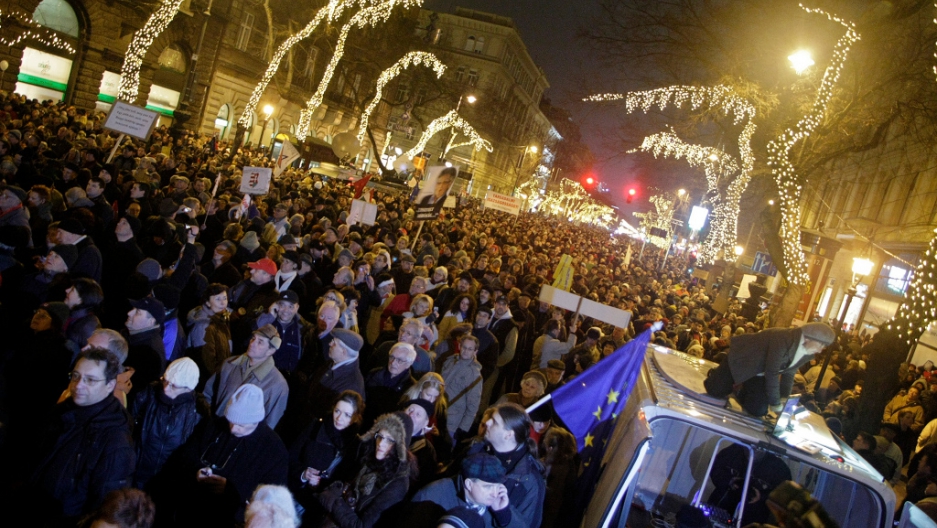 Tens of thousands protested against Hungary's new constitution which critics said curbed democracy, in front of the Opera in Budapest on January 2, 2012.
Credit: FERENC ISZA
Share

A day after Hungary's controversial new constitution took effect, tens of thousands of opponents on Monday staged a rare protest in the capital Budapest, the New York Times reported.

Several center-left opposition parties joined in the rally, outside the opera house in the city center, held where Prime Minister Viktor Orban was holding an event to celebrate the new constitution.

Agence France Presse quoted Socialist lawmaker Tibor Szanyi saying that Orban, whose conservative Fidesz party used its two-thirds majority to push the constitution through parliament in April, had turned a promising country into “the darkest spot in Europe."

Fidesz drew up and ratified the “majoritarian” constitution, which opponents say threatens democracy and tightens the government’s grip on the media and the judiciary, despite criticism from Europe and the United States, the Times reported.

Organizers say up to 100,000 people took part in Monday's rally, which the Times described as a previously unseen show of unity by opposition parties and civil groups.

However Fidesz has defended the new constitution, saying it completes the transition from communism that had stalled under previous governments. Fidesz lawmaker Gergely Gulyas, who co-wrote the constitution, or “basic law,” told Reuters:

"Despite political debates we think it is important that for the first time, a freely elected parliament created the Basic Law."

The furor over Hungary's new constitution comes amid the backdrop of the European debt crisis, and stands to hinder talks on a new financing deal with the European Union and International Monetary Fund, the BBC reported.

Hungary has not experienced the job growth promised by the Fidesz party when it won power in 2010.