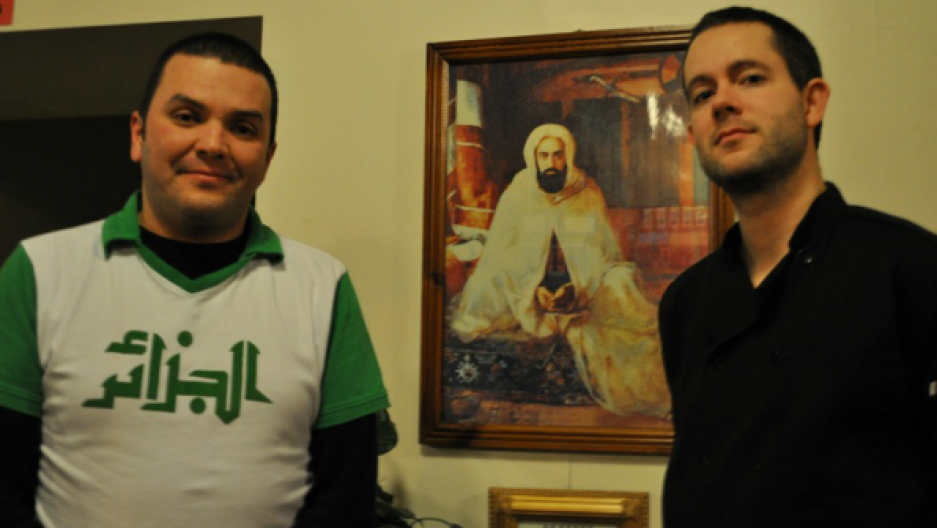 Frederique Boudouani, left, and Brian Bruening fell in love in Boston and then moved to Iowa, where they live in the only U.S. town named after an Arab jihadist. They run an Algerian restaurant there.

Elkader, a town of 1500 people in Iowa, is surrounded by corn and soybean fields. It’s the headquarters of the Tea Party Patriots of Northeast Iowa.

And it’s the only U.S. town named after an Arab Jihadist — a 19th century Algerian Muslim.

On Main Street is restaurant called Schera’s Algerian American Restaurant. The restaurant looks like a classic America bar. In the window you can see neon signs advertising beer.

But when you walk through the door, your eyes are drawn to a display on the wall.

Frederique Boudouani, co-owner of Schera’s, shows off a wall in the restaurant where a US and Algeria flag hang next to each other. There is also a picture of Emir Abd el Qader.

El Qader is most famous for leading an armed resistance against French colonial rule. He was a 19th century jihadist. After he was forced into exile, el Qader became a kind of interfaith hero. In Damascus, he saved a group of Christians who were attacked by a group of Druze.

Today, though, the Emir, with his beard and white shawl, doesn't conjure up images of interfaith defender.

“When a lot of people come in here the cultural reference they have is with mullahs in Afghanistan, or al-Qaeda, Bin Laden and those kinds of things,” co-owner Brian Bruening explained. “So we always have to make that extra effort … all Arabs are not Bin Laden. Actually the Emir was the opposite. He was a Sufi, he was a peacemaker.”

Brian Bruening said it can be doubly hard because of the way people tend to pronounce the name of the town.

“People generally say ‘Elkada,’ and I always emphasize to people that ‘r’ in Elkader — not a silent ‘r’. Please pronounce it,” he said, trying to make sure there's no extra, unnecessary connection to al-Qaeda.

Boudouani was born in Algeria. Bruening is a native of Iowa. The two fell in love as students in Boston, just a few months before Sept. 11.

“My way of trying to make sense of that horrific event I decided to research the history of Islam in United States,” Boudani said.

And so they found themselves in the town named after the man Boudouani considers Algeria’s George Washington.

“Coming from Boston at the time of our first trip to Elkader, you think you’re going to a town in the Midwest where the stereotype is that people are not really accepting, not really open minded,” Boudouani said.

But to their surprise, the mayor of Elkader, Ed Olson, was personally eager to greet anyone interested in the town’s Algerian connection. Boudouani’s Algerian friend, Faycal Belakhdar, remembers his first encounter with Olson.

“It was Sunday we were driving, we were downtown,” Belakhdar said. “Suddenly we see the old Mayor Mr. Olson. He came from his house wearing his robe. Somebody apparently called him and told him. There is some people with dark hair they must be Algerian. So we were at stop sign … everybody with dark hair … then we have this old man saying salaam alaikum.”

Back in the 1980s the Algerian Embassy invited Olson and Elkader to join the Sister Cities program. Elkader is sister cities with Mascara, Algeria. Olson and his wife, Ruth, took a delegation to visit Algeria. And so the couple welcomed Boudouani and Bruening — and helped them start Schera’s restaurant. Ed Olson passed away in 2009, but Ruth is still a regular.

“I think the restaurant is a fine addition to our town,” Boudouani’s said. “It’s drawing a lot of people to Elkader who would have never had any reason before to come.”

Ruth said not everyone in town is delighted by the idea of an Algerian-American restaurant run by an openly gay couple.

Boudouani said they try to act as cultural educators but it can be exhausting when you’re the town’s only Muslim.

“If there is a bomb in a nightclub in Bali people come and feel compelled to ask me why did that happen, can you explain it to us,” Boudouani said. “I turn into this sort of weird spokesman for the whole faith.”

Boudouani and Bruening say plenty of locals refuse to come to Schera’s. And a few residents raised concerns about their motives and their background.

Still, the restaurant has its share of regulars. Richard wears a checked flannel shirt and looks like the prototypical Iowa farmer.

“I think people who reach out and want to know others and like culture and like new experiences like that are grateful that this is here,” she said." It’s so needed because people across the country were having such a thing about anti-Muslim type thing… and the basic thing is we’re all the same.”

Boudouani hopes people get to know them as human beings and then shed stereotypes naturally.

Bruening said it makes sense for them to be in Iowa. The state has historically been on the forefront of progressive issues — from desegregation to gay rights.

“Who says we can’t come to Iowa and make a life for ourselves?” Bruening said.

Boudouani and Bruening both say Elkader feels like home.