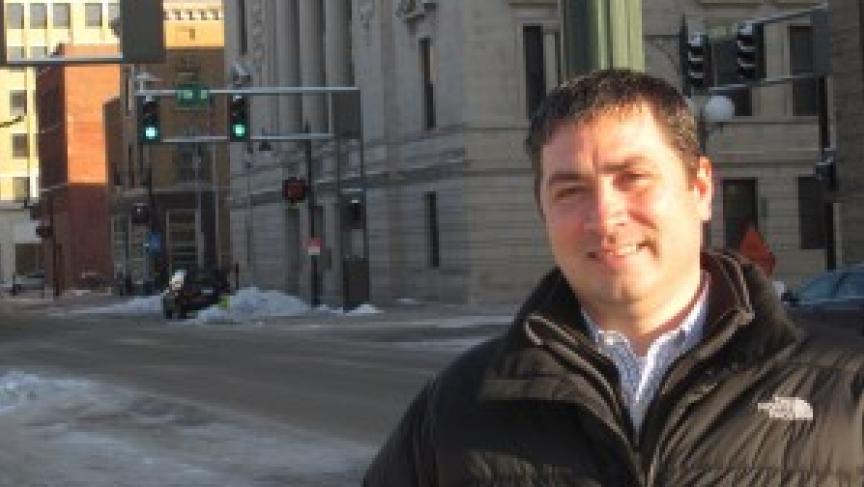 Fort Dodge Mayor Matt Bemrich stands in the city's downtown. The city has lured a South Korean company to town as it tries to restart its economy. (Photo by Jason Margolis.)

Small manufacturing towns throughout the Midwest have been ravaged by foreign competition for 30 years, but now some of those communities are reinventing themselves by looking abroad.

It can be a challenge. Hundreds of American communities are chasing euros, yen, and renminbi. So, what makes an American town stand out?

Consider the case of Fort Dodge, Iowa: a success story in the making.

The city bled jobs to foreign manufacturing locations for decades. The latest blow came in 2009 when appliance maker Electrolux announced it was shutting its factory in nearby Webster City and moving to Juarez, Mexico.

“We’ve looked into data of how many people have traveled from Fort Dodge proper over to Webster City to work at Electrolux, and we’ve estimated it at around 700 over the last few years have lost their jobs in that Electrolux closing,” said Fort Doge Mayor Matt Bemrich.

“It definitely affected families and people who had worked there for a number of years; you had generational employment there. So yea, it was devastating," Bemrich said. "But instead of crying about it, for lack of a better term, we went out and aggressively said, ‘Well, what do we do to replace those jobs?’ ”

One way to replace those jobs is take advantage of globalization. In October, Fort Dodge reeled in a big fish: South Korean company, Cheil Jedang, or CJ, says it will invest $324 million in a new plant near Fort Dodge to make additives for livestock feed. It’s expected to create 200 jobs.

CJ executive John Kang said in an e-mail that the company chose Fort Dodge primarily because Iowa has cheap corn. There’s a facility nearby to process that corn for its product. The company was also interested in transportation logistics and access to qualified workers. That's still a concern, Kang said.

CJ could’ve chosen any number of Midwestern locations with corn and a wet mill. Fort Dodge city manager David Firk said to really seal the deal, the town had to sell itself.

“We have to be competitive. It comes down to: Is this a place you want to live? Whether it’s the person making a decision on bringing a new industry here, as top level executives, do they want to live there?" Firk said. "Can they get his or her best and brightest people to move to any city, let’s say move to Fort Dodge?”

Kang said housing for Korean employees was a concern when choosing an American location.

Bemrich said when the South Koreans came to visit, he saw how much quality of life issues matter. They were pretty excited about the golfing options, for example/

“They were just amazed. In South Korea land being such a huge commodity there, and the available land in this region of the United States, we have a lot of golf courses.”

Maybe so. But there are lots of golf courses in Iowa, and everywhere in America.

Kang said the golf courses were nice, but not a factor in the company’s decision.

David Swenson, an economist at Iowa State University, said medium-sized communities all over the Midwest are marketing quality of life benefits to attract businesses. But distinguishing smaller communities in one state from another is difficult.

“And there’s nothing magical about Iowa that foreign investment would be particularly attracted to," Swenson said. "We don’t have the kind of combination of assets and productivity that would necessarily send out a very, very strong message to foreign investors.”

In the end, he said, foreign firms locate where it makes sense economically, not aesthetically.

"Relationships are so important," he said. "And also with leaders.”

It might sound odd to emphasize the personal connection, but it can be crucial to getting a deal done. Just having a meal with a Chinese businessman goes a long way toward establishing trust.

Branstad said he has a leg up in the relationship building department: He served as governor of Iowa for 16 years in the 1980’s and 1990’s, before being re-elected again in 2010. Branstad tella a story of meeting with Xi Jinping in Iowa 1985. Xi was a low-level Chinese officia in the 1980s, but he’s expected to soon become the next president of China. Branstad met with him again recently in Beijing.

“He has a very positive feeling about Iowa. And he had the itinerary from his visit here 26 years ago. He said this, he said I was in your office at the state capitol of Des Moines, on the 26th day of April, 1985. And he said, he stayed with a family down in Muskateen who had two sons in college and a 13-year-old daughter," Branstad said. "He was very impressed with the friendliness, the hospitality, and the way he was treated in Iowa.”

Branstad is confident he can leverage that personal relationship into Chinese investment in Iowa. He has also turned his sights to South Korea, especially with its passage of a free trade agreement with the U.S.