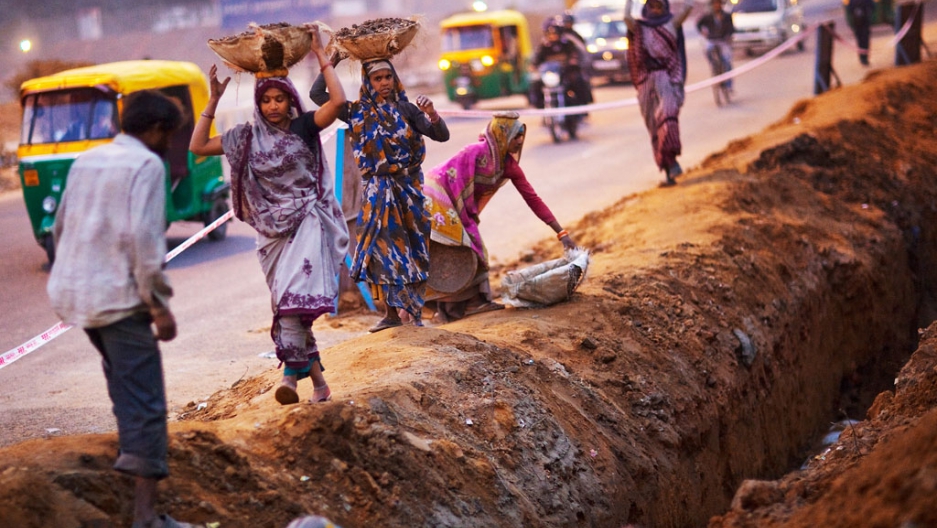 Editor's Note: The Shiva Rules is a year-long GlobalPost series that examines India in the 21st century. Correspondents Jason Overdorf and Hanna Ingber examine the sweeping economic, political and cultural changes that are transforming this nascent global power in surprising and sometimes inexplicable ways. To help uncover the complexities of India's uneven rise, The Shiva Rules uses as a loose reporting metaphor Shiva, the popular Hindu deity of destruction and rebirth.

NEW DELHI, India — For the past two decades, policymakers have been banking on rapid economic growth to lift millions of Indians out of poverty.

But even as the boom has made it easier for the country's poorest people to afford refrigerators, televisions and mobile phones, the spending power of the rich has grown many times faster.

Now, the widening gulf between those at the top and those at the bottom is steadily increasing the pressure on the many fissures in this highly fractured society — and a looming slowdown could hit the poor harder than anybody.

“We have to see this in the context of a country that already bears a huge burden of stratification, but also caste and gender and all these things compounding each other,” said development economist Jean Dreze, who played a key role in designing and implementing India's largest social welfare scheme.

“The fact that there's a new, rising dimension of inequality, that is income inequality, reinforces something that's already a big issue for Indian society and the Indian economy,” Dreze said.

Despite boasting the world's second-fastest economic growth, India has made little progress in eradicating poverty since it began liberalizing its economy in 1991, according to a new study by the Organization for Economic Cooperation and Development (OECD). Instead, the gap between the incomes of the rich and poor has doubled, so the top 10 percent of workers now earn 12 times the amount earned by the bottom 10 percent — while 42 percent of the country's 1.21 billion people survive on less than a dollar a day.

Consider 36-year-old Indu Devi. Only semi-employed, she works from home sewing dupattas — the scarf-like complement to a woman's salwar kameez, or loose pajama-like trousers — for a local factory.

In a good month, she earns $30; in a bad one, only $10. In the past 10 years, she's acquired luxuries like a television and a mobile phone — partly because she “owns” her tiny room in an illegal structure in one of New Delhi's many “unauthorized colonies.”

Devi shares a space the size of an American bathroom with a man and four children. There's no bathroom or sink. Water comes from a hand pump outside, shared with the neighborhood. The stove is a burner attached to a gas cylinder, and everything the family owns is hanging from half-a-dozen hooks on the wall: two sets of clothes for the adults, one to wash and one to wear; four sets for the kids, along with their school uniforms.

Her thoughts about India's economic boom?

“Sometimes I feel frustrated, as I can cannot meet the demands of my kids all the time."

Nobody will be surprised to hear that India's new wealth has been slow to trickle down. But as debate rages over government programs designed to provide more equal opportunities to the poor — or simply to ease their suffering — the bald facts beg the question: Is growth enough?

Many economists point out that an increase in inequality is inevitable with rapid economic growth — though the OECD found this was not the case for Argentina, Brazil or Indonesia over the past decade or so. In those three countries, the economists found, income growth of the bottom and middle groups outpaced that of the highest earners. And at least in Brazil — where inequality remains much higher than in India in absolute terms — higher taxes and a new focus on social programs seems to have been a factor in making the difference.

Some argue, as well, that rising inequality is not an evil in itself, so long as life also improves for the country's poor. The real problem is absolute, not relative poverty, they say. And the best way to address that is to make the pie larger, not to change the way you slice it up — especially where government programs are hampered by corruption and inefficiency.

“This is inequality in outcomes, either in terms of consumption expenditure or in terms of income,” said economist Bibek Debroy, a professor at the New Delhi-based Center for Policy Research.

“If you are talking about inequality in terms of access to health services, education, financial products, technology, the law and order system, then I'm prepared to buy the argument that we should be concerned. But that's not what this inequality is about.”

It's not that the benefits of economic growth don't trickle down at all. Debroy believes, for instance, that the biggest reason for the increase in inequality is geography, not class or caste.

While the trickle has missed some parts of India altogether, he would argue, poor people like Indu Devi have seen marked improvements in their lives over the past 20 years. The trouble is that rapid growth and runaway consumption by the burgeoning middle class has simultaneously increased the aspirations of the poor and driven up prices.

Right or wrong, many of those at the bottom see the glass as half empty.

Despite a shortage of skilled labor, for instance, 25-year-old machinist Rajesh Kumar, who lives a few houses away from Devi, earns only about $150 a month. Based on India's erstwhile economic forecasts, he should be poised for great changes. Yet he's pessimistic about his prospects.

"Even if the number of companies are rising, unemployment is also on the rise,” Kumar said. "If the country progresses, the poor will only become poorer, as things will get more expensive. We can never progress."

With inflation hovering around 10 percent, the central bank has raised interest rates 13 times since March 2010. But today India Inc. faces a drop in foreign investment and skyrocketing fuel costs resulting from a 20 percent plunge in the value of the rupee.

As a result, a manufacturing sector that had only just begun to take off is gearing down — as signaled by a 5 percent drop in industrial output for October, the last month for which data is available. And, at least in private, investors and entrepreneurs are beginning to think the unthinkable: That GDP growth might just dip below 6 percent.

Inequality problem solved, you might be tempted to say. But it looks like the poor will likely bear the brunt of the slowdown, too. They lack savings to carry them through bad times, of course, and they fight for work where competition is the toughest.

But the downturn has also resulted in new criticism for the current government's social welfare programs, such as a planned expansion of the distribution of subsidized grain to cover two-thirds of the population.

In terms of access, too, however, the vast gulf between India's rich and poor appears to be acting as a multiplier, worsening the country's long-standing problems while preventing action from being taken against them.

The rapid growth of high-quality, private hospitals in India's cities means that the most vocal and influential citizens no longer complain about public facilities. All but the poorest Indians have abandoned the government's free schools, even as the current administration strives to make education a basic right.

And though wealthy and middle-class Indians carp about “leakages” in the welfare system that distributes subsidized grain to the destitute, they do so primarily to argue against spending increases, without taking much interest in fixing the problem — even amid Anna Hazare's anti-corruption fervor.

This vast difference in perspective, incidentally, may also explain why none of the many Indian papers that reported on the OECD study mentioned its conclusion about the main reason for the dramatic increase in income inequality over the past 20 years: A widening gap between the regular, salaried workers protected by the country's labor laws and the so-called “contract workers” outside the system.

So, too, that difference in outlook may explain the silence on the OECD's recommended course of action: more flexible labor policies and higher spending on education and social welfare — funded by progressive taxes.

“There's a pervasive problem in public policy of lack of attention to the underprivileged and insensitivity to their needs, which is not necessarily out of hostility to them,” said Dreze. “It's just that the people who run the show don't relate very closely to these people.”

The result of India's gross inequity, therefore, is a vicious cycle. India spends less on social programs than the world's other large emerging economies, according to the OECD study.

Brazil and Russia spend nearly three-fourths as much on social programs, as a percentage of GDP, as OECD member countries like the Netherlands, Spain and the United Kingdom, for instance. India spends only a fourth as much as the OECD average.

The biggest reason for the discrepancy is that it has virtually no safety net for the aged or unemployed, apart from the recently created National Rural Employment Guarantee Scheme, a program that is often criticized locally as expensive and corrupt, and yet one that the OECD recommends expanding.

“It could go either way. Depending on the politics, you could see India moving toward more extensive welfare provisions and reconstructing the health-care system,” said Dreze.

“You could also see the schooling system being privatized. There's a huge lobby of insurance companies that would like to see the health-care system go in the direction of health insurance. Nothing can be taken for granted.”