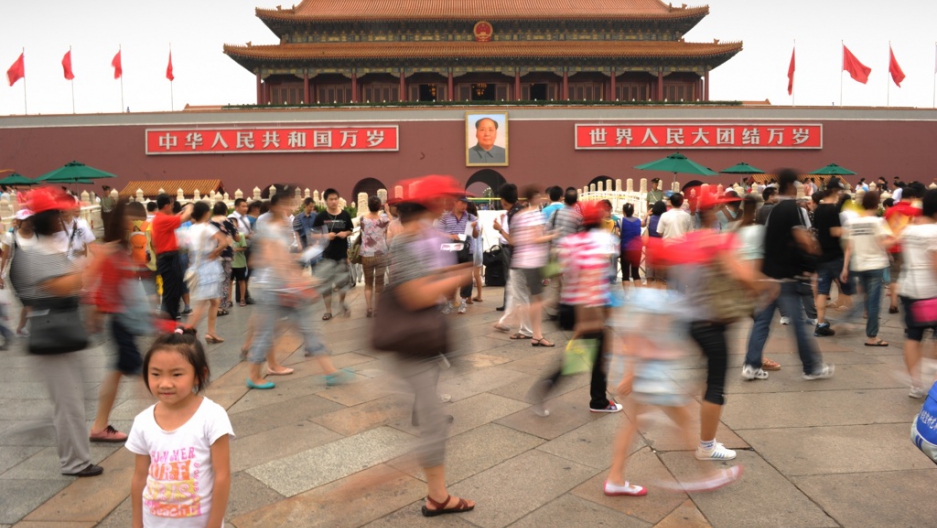 Visitors have their photos taken in Tiananmen Square in Beijing on August 17, 2011.
Credit: Peter Parks
Share

BOSTON — A history-making drive for freedom and for representative government swept much of the globe in 2011 but arguably the world’s most important country, China, remained on the sidelines, still firmly locked in the grip of one-party Communist rule more than half a century after the birth of the People’s Republic of China.

The world’s second biggest economy and the largest country by population with 1.3 billion people, one-fifth of the entire global human family, China is also a nation rife with contradictions — a Communist-ruled state in which raging capitalism is not only tolerated but is encouraged by the Communist Party and the government; a country where you can become as rich as your talent and connections allow, so long as you play by the rules and do not rock the political boat. China has a huge and growing middle-class but also a vast agrarian and urban underclass.

One of the most enduring phenomena of the past two decades is the global fascination with all things China. Yet that fascination has co-existed with a willful avoidance of China’s human rights record.

As the Chinese economy roared ahead, seemingly every large company in the developed world rushed to invest there. At times it seemed that every high school and college student in the United States was studying Chinese or spending a semester or a summer studying in China.

China became the essential travel destination for the elite. Yet most of these otherwise intelligent people turned a blind eye to China’s abysmal record on human rights and its continuing denial of the right of free expression to its own people.

Except for the most celebrated cases, we know relatively little about public protest in China. The Chinese Academy of Social Sciences has reported that there were more than 80,000 "mass incidents," or incidents of public protest against the government in 2007, up from more than 60,000 in 2006. Unfortunately, the Academy has not released new statistics for the past four years but it’s almost certain the number of protests has continued to increase.

Recent events in the fishing village of Wukan, located on the South China Sea in Guangdong Province, gives credence to the likelihood that there is widespread dissatisfaction with the government among the Chinese people.

The Wukan protests began in September and steadily grew in intensity. They have been especially notable for the bravery of the people of Wukan who’ve openly questioned property sales in their village, sales engineered by Communist Party officials, and by the confiscation of their farmland for private development. The protests accelerated in December and residents of Wukan literally drove local officials out of the village when they learned the person they had chosen to negotiate with the government had died, supposedly of a heart attack, while in police custody. Villagers believe he was murdered and point to bruises on his body and other signs of possible torture.

China is ruled by the Communist Party with the Central Committee at the top and countless thousands of party officials farther down at the province, district and village level across this vast nation. The Chinese Communist Party (CCP) infiltrates and dominates all aspects of the government and the military and it ruthlessly stamps out any threat to its long hegemony.

Chinese leaders have always been deeply concerned about any dissent but their vigilance has increased significantly since the start of the Arab Spring in January 2011 and the toppling of leaders, first in Tunisia, then in Egypt, and most recently in Libya.

Although access to information is heavily censored in China, news of the Arab Spring has inspired many Chinese to step up their protests. But the so-called Jasmine Revolution has reportedly been brutally suppressed.

Renee Xia, International Director, for the China-based organization China Human Rights Defenders, has written that the Chinese government, in its recent crackdown on the Jasmine Revolution protests, has “relied on the use of enforced disappearances, arbitrary detentions and torture to intimidate anyone who might try to start an Arab Spring in China.

Human rights defenders, civil society activists, lawyers, journalists, even artists, like Ai Weiwei, paid great personal price for advocating rights and democracy in China.” The CHRD website is a rich documentary source for anyone wishing to follow the human rights movement in China.

Two weeks ago, Gao Zhisheng, a prominent human rights lawyer, was sentenced to three years in prison. This followed his conviction in 2006 for allegedly inciting subversion of state power. He had been missing for most of the past five years.

There are many other such cases and, of course, there is Liu Xiaobo who was awarded the 2010 Nobel Peace Prize, over China’s vehement protest, for what the Nobel Committee cited as his “long and non-violent struggle for fundamental human rights in China.”

Ms. Xia of the China Human Rights Defenders points out that the situation in China has gone “from bad to worse during the past few years."

Intensified violations include the excessive use of death penalty, torture, arbitrary detention, disappearance, censorship, and broadened repression of religious and ethnic minorities, the Uighurs and Tibetans, Falungong practitioners, and underground Christians. In Tibet this year, as extensively reported by GlobalPost, there has been an unprecedented wave of self-immolations protesting China’s rule.

As concerned as the Chinese rulers are about the Arab Spring, what must they be thinking about the more recent developments in Russia?

On the day before Christmas perhaps as many as 120,000 Russians turned out in Moscow to protest the rule of Prime Minister Vladimir Putin, the former two-term president who will seek the presidency again in elections scheduled for March. It was the second major demonstration in Moscow in December — and in both numbers and in intensity of feeling these citizen protests have been unlike anything Russia has seen since the fall of the Soviet Union and the end of Communist Party rule.

The unmistakable message from all of these events is that people will eventually demand their freedom.

In Tunisia, which gave birth to the Arab Spring, it took only 28 days from the self-immolation of a young fruit seller named Mohamed Bouazizi to the downfall of President Zine El-Abidine Ben Ali and the beginning of real democracy in that nation.

No one can be sure when or whether an event somewhere in China will precipitate an unraveling of the Chinese Communist Party’s long and ruthless hold on the country and its suppression of the Chinese people’s legitimate right to chose their own government. And if it comes, it will not be quick nor easy of achievement.

More from Philip Balboni: Is this the end of the America Dream?

To be sure, there are many people across China who do not wish for revolt, particularly those who have worked so hard to succeed in the current system. And, clearly, serious unrest in such an important country would produce severe consequences not only for the people of China, but for the global economy as a whole.

But it seems inevitable that such a day will come. The Chinese people are incredibly industrious and intelligent and the striving for freedom is too strong to be held in check forever.

Philip Balboni is CEO and Co-Founder of GlobalPost.