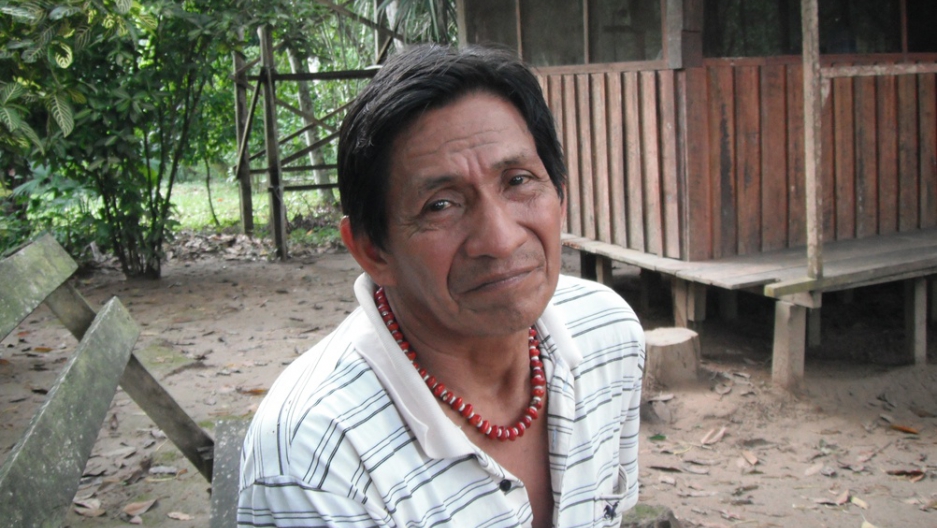 MADRE DE DIOS, Peru — Without a word, the shaman hands me a plastic cup of ayahuasca, one of the Amazon rainforest’s most powerful hallucinogens.

I down the pungent black liquid in one gulp, barely managing to repress the gagging reflex that its bitter, foul taste instantly triggers.

And the wait begins.

Around us, in a moonless blanket of darkness, the rainforest throbs with life. A chorus of insects, frogs and other unidentified creatures crescendos into a wall of pulsating whirrs, clicks, and screeches.

By the light of a single candle, I can barely see the shaman, Honorato Mishajo Shajoo, sitting on the ground, as he begins to hum and chant, occasionally playing a few lilting, repetitive notes on a mouth organ.

Every now and then, I make out a few words of Spanish. “Protecting, protecting, with your powerful medicine,” he intones.

I am at the Centro Nape, run by the Ese-Eja indigenous community of Infierno, deep in the Madre de Dios region of the central Peruvian Amazon, getting some hands-on experience of the growing trend of ayahuasca tourism.

Traditionally, the liquid was taken by men before going out to hunt, to put them in touch with the spirits of their prey.

But now, as its reputation has spread beyond the Amazon, travelers are coming from around the world, some in search of spiritual enlightenment, others looking simply for psychotropic thrills.

There is little firm data, but, by all accounts, the number of visitors is rising. At the Centro Nape, they welcome one or two foreign visitors a week, a fourfold increase compared to five years ago.

Read more: Left vs. the indigenous in LatAm

Many of those tourists end up experiencing a wild, cosmic rollercoaster ride of high-definition hallucinations, often involving close-up encounters with animals from the rainforest, in particular snakes.

They also run through a seesaw of jangling emotions that range from euphoria to a deeply humbling realization of just how insignificant their own existence is in this vast universe.

No wonder that many who have tried ayahuasca, which is legal in Peru and many other countries, describe it as a life-changing experience.

But ayahuasca is not to be taken lightly. Bad trips, filled with terrifying visions, are also possible. And even good trips have their hairy moments. Participants need to be feeling relaxed and focused, ready to steer their trip in a positive direction.

Ayahuasca is also a powerful purgative, meaning that users routinely vomit or have diarrhea.

All of which makes taking it under the quiet, gently-smiling guidance of Honorato, in a package organized by Rainforest Expeditions, one of the Amazon’s best-established ecotourism companies, seem like a relatively sensible thing to do.

Ayahuasca is actually just one of thousands of concoctions the Amazon’s shamans make from the myriad plants around them, often as cures for everything from menstrual pains to malaria.

Shamans frequently claim they discovered these recipes, many of whose benefits have been proven by Western science, while hallucinating.

“Indigenous people believe they acquire knowledge from dreams,” says Luisa Belaunde, an anthropologist at Peru’s Pontifical Catholic University. “But of course, dreams are the result of life experiences.”

Honorato clearly takes his role as a healer very seriously. “Ayahuasca is a medicine,” he says, without specifying what ailment it treats. Would “modernity” count, anyway?

”You do not take it for fun,” he adds, in what sounds like a reproach to those tourists who view it as just one more recreational drug, rather than as a source of metaphysical awakening.

Earlier in the day, before the ayahuasca ceremony, Honorato shows me around his medicinal garden. One of the highlights is parapara, whose name literally translates as “stand up, stand up.” Among tourists, it is better known as jungle Viagra.

At the end of the tour, he shows me the two different vines he boils together to make ayahuasca. Either one consumed on its own has no effect.

That evening, an hour after taking my first cup, no visions have come to me, nor do I feel altered in any way. Honorato gives me another dose. We keep waiting.

Another hour slips away. Honorato hands me a third cup. I down it and, for the first time, feel the nausea that ayahuasca typically induces. After a few minutes, I retch uncontrollably.

Eventually, I ask Honorato whether I will trip. “Not this time,” he says softly.

Apparently, I have taken the maximum dose, enough to send most people on a 12-hour ride of their lives. All I feel is sleepy.

Later, Belaunde, the anthropologist, tells me that my anti-climactic experience is quite common. It does not mean that the ayahuasca I took was not potent, or that I would not trip intensely if I took it again.

“Neuroscientists are fascinated by ayahuasca,” she says. “They do not understand why sometimes it works and sometimes not.”

But Honorato has a more cryptic explanation: I have “bad energy,” he tells me. Somehow, inadvertently it seems, I brought some kind of negative karma to the ceremony.

That notion, that the experience depends not just on the psychoactive brew but also on the conscious and unconscious effort of the person who takes it, clearly separates ayahuasca from the recreational drugs frequently taken in modern, consumerist societies.

Next time, it seems, I'll need to work a little harder.