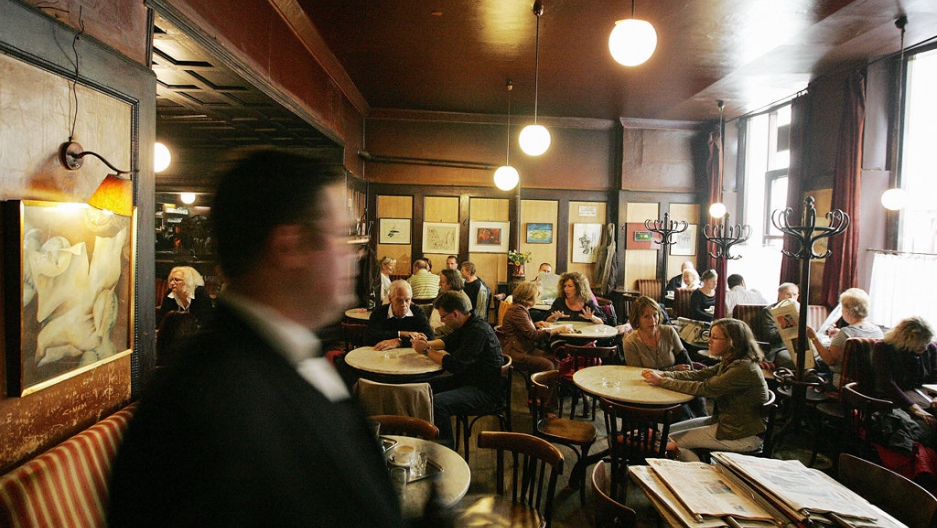 A typical afternoon at Cafe Hawelka in Vienna.
Share

Vienna's cafes are one of the lingering glories of European civilization. They are democratic spaces in the heart of an old imperial capital, club houses for everyone. These cafes prove culturally, what Einstein demonstrated in theoretical physics: time is relative. Walk through the door of one and you can feel time slow down and the gravitational pull of the space can keep you there for much longer than you expected. No one will hurry you along after you finish your coffee - or something stronger if the weather outside is cold and damp, which it is for much of the year.

Leopold Hawelka, who has died age 100, ran the most authentic of these establishments, the eponymous Cafe Hawelka, in the heart of the city, on the Dorotheergasse, a narrow street leading off the Graben, the main shopping precinct. Not as grand or light as other cafes that survive from the city's golden age, and all the more authentic for that, Cafe Hawelka was a smallish room whose essential color was brown - dark wood, chocolate colored leather on the banquettes - dotted with white marble table tops.

Hawelka opened the place in 1945 after surviving the Russian front as a conscript in the German army. As always with good bars and cafes it was the owner's personality that made it a success. Artists passing through Vienna found their way to the dark-paneled den. Andy Warhol and Arthur Miller hung out. Local painters had their work on the walls. Writers could use it as an office. Waiters didn't hassle you to buy another drink, you could stay as long as you liked, read the papers, do nothing much. Hawelka was cool with that. The coffee was good and the brandy was cheap.

For a couple of years, while researching my book, Emancipation. I visited Vienna regularly, usually in the winter, and between appointments I made Hawelka my office. I found it hard to imagine that a cafe like it still existed in any center city of the new Europe. I was writing about Jewish life in fin-de-siecle Vienna, the atmosphere in Hawelka helped my imagination.

It's a real gift to maintain the spirit of another age authentically. Leopold Hawelka had it. Thank goodness.