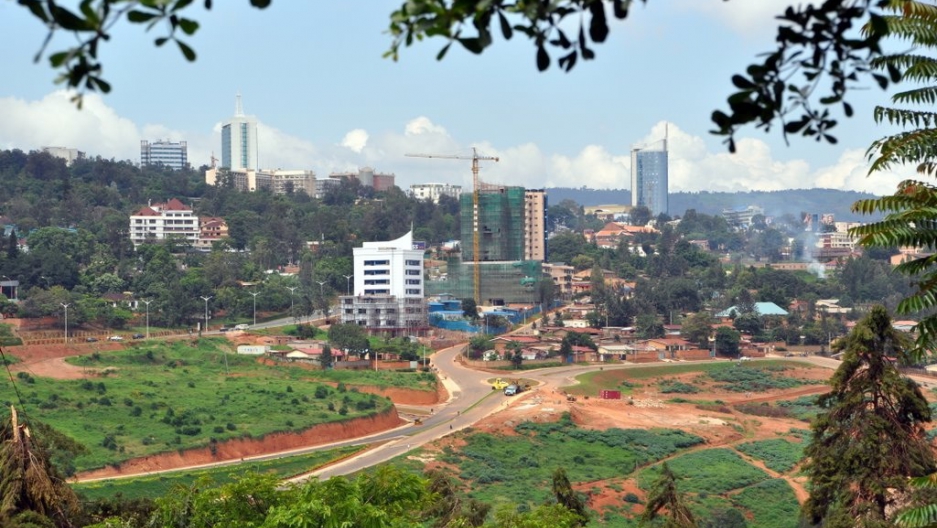 KIGALI, Rwanda — The two-year-old stock market in this small central African backwater is not exactly bustling with billion-dollar deals.

But stock brokers here have earnest ambitions to become a financial powerhouse, and not everyone thinks they’re crazy; on the contrary, they’re actually making real progress.

The country synonymous with genocide is aiming to become the economic powerhouse of East and Central Africa.

For now, Rwanda’s stock exchange resembles a middle-school classroom more than Wall Street. It consists of a white board where a young man occasionally writes up an offer with a black Sharpie. Above the whiteboard is a portrait of President Paul Kagame. Nearby is a wooden-handled bell, used to open and close trading.

David Mitali, 28, snaps open his cell phone and advises a broker about Bralirwa Brewery. An “operations manager” at the exchange, he knows Bralirwa well: it is one of only four listed stocks; the exchange also handles government bonds.

“The Rwanda Stock Exchange aims to become the financial center in east Africa,” says Mitali, who has worked here since it opened. He enthusiastically lists reasons why Kigali may succeed.

“We’re developing a good reputation for being user friendly,” he says. “No tricky, tricky business here. No corruption. We are becoming a market where investors like to do business.”

“The security of the country is good. Our economy is fast developing. Investors are coming here to invest in the wider region,” he adds.

There is some truth to Mitali’s assertions.

Seventeen years ago, the genocide here killed some 800,000 people, leaving most of the country’s 11 million people deeply traumatized. But now, its determined  president, former army general Paul Kagame, is working hard to transform Rwanda into the most business friendly country in East Africa.

Kagame is making real progress. GDP growth has averaged 8 percent since 2004. In 1995, 100 percent of the government budget came from foreign aid. In 2011, it has fallen to 40 percent. The government aims to get that to zero.

If there were a “most improved player” award for business cultures, Rwanda would be a contender.

Just three years ago, in the World Bank’s list of best places to do business, Rwanda ranked a dismal 150th. This year, it has leaped to 58th. One innovation that has helped this: Rwanda changed its official language from French to English last year, to accommodate commerce from neighboring countries Uganda, Kenya and Tanzania.

More remarkably, Rwanda now ties the United States as the ninth-easiest country in which to start a business, according to the World Bank’s 2011 Doing Business Survey. That’s up from 71st in 2008.

That ‘can-do’ business climate is evident at the offices of the Rwanda Development Board. There, one recent morning, about 50 Rwandans sat in rows, each clutching papers to register new companies.

Large posters proclaim “1-Day Business Registration.” From the sound of stamps thumping on papers and the flow of smiling people leaving the room, the office is keeping its promise.

“When we started in January 2009, eight different institutions were needed to approve investments. Now we have one,” said Clare Akamanzi, chief operating office of the Rwanda Development Board. “Our main objective is to spur economic development through the private sector. Every year we look at what needs to be improved to get more economic development.”

And they implement their ideas.

One example: Just across the hall from the business permit office, Rwandans can apply for business loans.

That innovation is having a tangible impact on Kigali. Outside the stock market, the streets clang with the construction of shiny office towers that are fast becoming the city’s defining feature. The stock exchange is in one of the new towers. Nearby skyscrapers house the Bank of Kigali, Ecobank, the Rwandan Central Bank and Ernst and Young.

The city's business men and women in suits and carrying briefcases are aiming to make Kigali the rival of Nairobi for East African business.

Rwanda still has a long way to go.

A majority of Rwandans still live on less than 50 cents per day, according to the CIA World Factbook, with 77 percent on less than $1.25 daily. With a population growth rate of 2.7 percent, Rwanda needs annual GDP growth of 8 percent to sustainably reduce poverty and increase revenues.

The country does not have oil or other significant resources or major industry. It’s a mountainous territory about the size of Maryland, and has the highest population density in sub-Saharan Africa. This is particularly problematic because 86 percent of the population subsists on traditional agriculture, according to the United Nations. The scarcity of land means the country must rapidly develop its economy to give Rwandans an alternative to tilling the soil.

To transform Rwanda into a linchpin for regional trade, the country has opened 24-hour border operations, to promote the flow of cargo and people.

Rwanda joined the East African Community, whose other members are Kenya, Tanzania, Uganda and Burundi. The government is aligning Rwanda's budget, trade, and immigration policies with its regional partners.

Although Rwanda is looking East, it is also reaching West. It is angling to become the trade conduit for eastern Congo’s wealth of minerals and also to provide goods and services for that country.

“There is lots of trade between Congo and Rwanda, and it's growing,” said Aloys Tegera, director of research for the Pole Institute of the Democratic Republic of Congo.

Standing by the teeming border of between Gisenyi, in Rwanda, and Goma, eastern Congo, Tegera points to trucks lined up to transport minerals into Rwanda.

And nearby he shows pedestrians streaming from Rwanda into Congo, carrying fruits, vegetables and freshly butchered meat.

In dramatic contrast to the order and neatness on the Rwandan side of the border, eastern Congo is chaotic. It is easy to see why businessmen say that going from Rwanda to Congo is “like going from Switzerland to Somalia.”

“Across the border we don’t have a functioning state. Congo’s banking system is not good, and many Congolese are setting up bank accounts here in Rwanda,” said Tegera. “Many Congo teachers come over to teach in Rwanda, and many people prefer to use the Rwanda postal service.”

Leveraging its position between East and Central Africa is an important strategy the Kagame government is using to boost Rwanda’s economy, said Tegera.

“Rwanda’s reputation for little corruption and good business services is making the country attractive,” he said. “Many Congolese are coming to Rwanda to do business.”

Andrew Meldrum reported this article under a “Gatekeeper Fellowship” from the International Reporting Project.