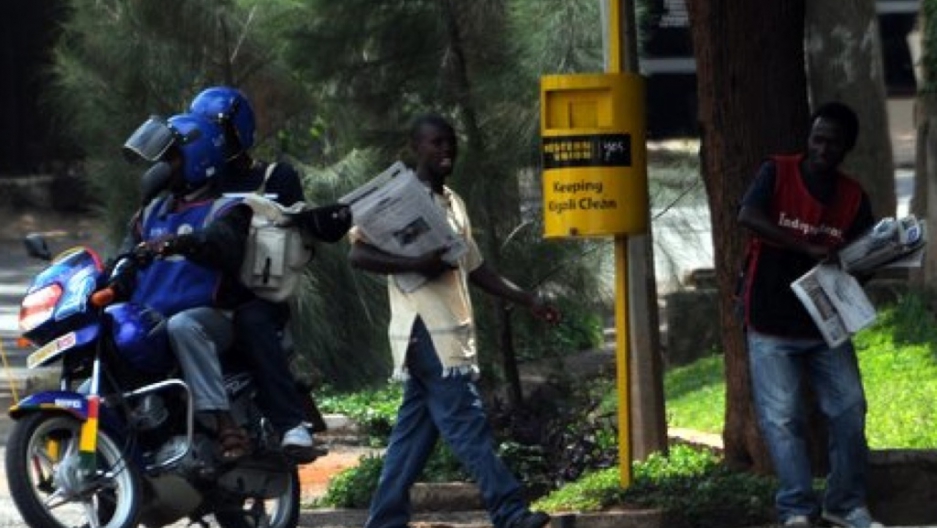 KIGALI, Rwanda — Sporting a hat at a jaunty angle and a winning smile, Fred Mwasa is very much a journalist about town here.

Driving through Kigali, he rattles off commentary about the construction sprouting up across the capital city.

“That is our first shopping mall. And that is going to be a Marriott Hotel. … Americans bring democracy. Chinese bring things we need, like new roads,” says Mwasa, pointing out a new divided thoroughfare, landscaped with grass, flowering shrubs and palm trees.

Mwasa shows a poor neighborhood that he says will be torn down as part of the government’s ambitious urban development of Kigali.

“These old houses will be replaced by high-rise buildings. The families will be moved to the outskirts. Maybe they will be happy with their new homes, but maybe not,” said Mwasa, 31. “We want to look into that.”

Mwasa has a reporter’s knack for seeing stories wherever he looks. That’s good, because he’s the managing editor of a new weekly newspaper, The Chronicles, a sharp-looking paper that brims with political stories, features and commentary.

“Rwandan readers are looking for good stories to read and we are providing that,” said Mwasa, in his office, which features portraits of Nelson Mandela and Martin Luther King, Jr.

“I’m optimistic about Rwanda,” said Mwasa. “There is so much going on. So many new businesses. The time is right for a new paper.”

Mwasa’s bubbling enthusiasm about the prospects of Rwanda’s press, however, is not shared by many in the African media world. Rwanda is ranked as one of the world’s most repressive countries for the press, according to recent surveys.

Reporters Without Borders rates the Rwanda press climate as one of the 10 worst in the world, with a ranking of 168 out of 179 countries. Freedom House rates Rwanda’s press as “not free” and places it at 178 out of 192 countries.

Several independent papers have closed down after being criticized by President Paul Kagame’s government. Editors and reporters who have angered the government have fled Rwanda.

Sometimes even exile does not ensure safety. A Rwandan journalist was shot dead in Uganda on Dec. 1 in what many suspect was a hit job. Charles Ingabire, 32, was an outspoken critic of the Kagame government in the website, Inyenyeri. Police recovered five casings of a sub-machine gun in the bar where Ingabire was killed.

This was not the first time Ingabire was attacked. He was severely beaten in October by assailants who took his laptop and demanded that he shut down Inyenyeri. The website was hacked into and temporarily closed.

Ingabire is the second Rwandan journalist killed in less than two years. In June 2010, Jean-Léonard Rugambage, deputy editor of Umuvugizi a paper critical of the government, was shot as he drove home in Kigali.

“Critical journalists are not tolerated in Rwanda,” states the Committee to Protect Journalists. Since April 2010, six journalists fearing intimidation and arrests have fled in exile, according to the CPJ. Two Rwandan journalists, Agnès Uwimana and Saidati Mukakibibi, currently face lengthy prison sentences for charges that include insulting President Paul Kagame.

Yet, Mwasa and others say that the situation for the press is slowly improving. The Kagame government is taking steps to relax its grip on the state broadcasting and to reform laws regulating the press.

The improvements for the press were highlighted at the National Media Dialogue, a government-sponsored conference on the press on Nov. 15.

Dramatically contradicting the government’s speeches was the arrest, the same day, of the managing director of The New Times, a pro-government newspaper that had run an expose of corruption.

Rwanda’s press is relatively small and centered in Kigali. Rwanda’s literacy rate is 70 percent. As more than 80 percent of the country’s 11 million people live in the rural areas, radio is the most widely used way people get news.

As in everything in Rwanda, the press is affected by the 1994 genocide. Prominent Rwandan newspapers and radio stations aggressively incited the mass killings. That troubling history makes the government wary about allowing a completely unfettered press.

“This sector continues to be plagued by lack of professionalism,” said Prime Minister Pierre Damien Habumurenyi, when opening the National Media Dialogue. “Some of our journalists use their independence and open media environment in ways that stand in contrast to the democratic ideas for which they claim to fight.”

As Rwanda works to build a future beyond the genocide, a free press is necessary, according to Mwasa.

“We have a positive contribution to make,” said Mwasa, who also teaches journalism in Kigali. “The press should point out things that people think is taboo — to encourage debate.”

For instance, Mwasa’s paper has featured articles on the issue of whether or not President Kagame should run for a third term. The paper quotes government supporters who say it would be a good thing for Kagame to extend his time in office. Others say it would be terrible.

“This is a healthy debate,” said Mwasa. “We are helping to make a more open atmosphere in our society. That’s good for all Rwandans.”

Andrew Meldrum's trip to Rwanda was sponsored by the International Reporting Project.