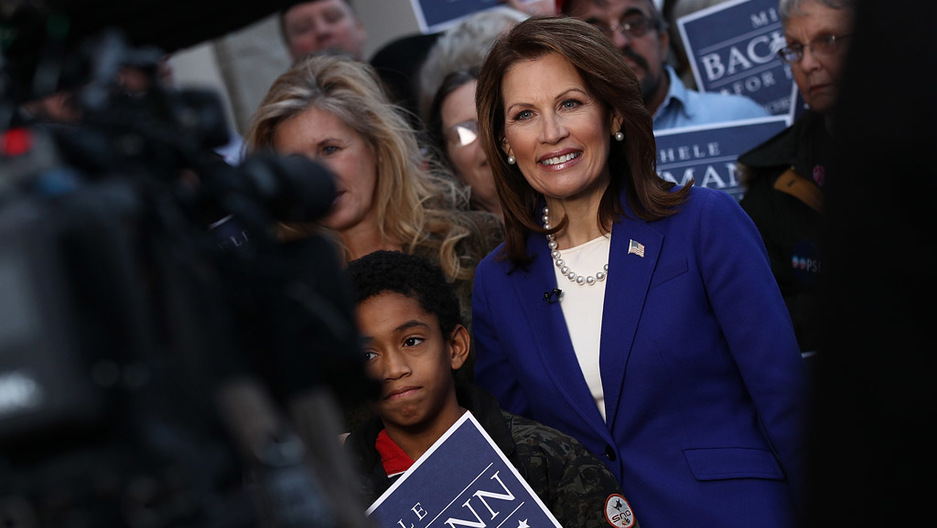 Republican presidential candidate Michele Bachmann stands with supporters before a meet-and-greet campaign event December 29 in Nevada, Iowa. Earlier in the day, Bachmann charged that the campaign of Ron Paul had offered money to one of her key Iowa supporters, Kent Sorenson.
Credit: Win McNamee
Share

Michele Bachmann, who is trailing in the Iowa polls, stood by her allegations that rival Ron Paul's campaign bribed Kent Sorenson today.

The accusations come a day after Sorenson — an Iowa state senator and Bachmann’s campaign chairman in the state — left her to endorse Texas congressman Ron Paul, who is currently a leading candidate to win the Iowa caucuses, The Washington Post reported.

“He told me that he was offered money, he was offered a lot of money by the Ron Paul campaign,” Bachmann said of Sorenson to reporters in a parking lot outside the studios of WHO-AM radio in downtown Des Moines. “No one else knows about that conversation other than Kent Sorenson and myself.”

Bachmann claims that Sorenson told her that he was offered money to support Paul in a phone call on Dec. 27. She did not say how much money was involved, the Post reported.

“I was never offered money from the Ron Paul campaign or anyone associated with them and certainly would never accept any,” the former head of Bachmann's Iowa presidential bid said in a statement. “There is a clear top tier in the race for the Republican nomination for president, both here in Iowa and nationally. Ron Paul is easily the most conservative of this group.”

Bachmann's political director Wes Enos also denied that Sorenson's decision was motivated by a bribe of any kind.

“I can say unequivocally that Kent Sorenson’s decision was, in no way financially motivated,” Enos said in a statement. “While I personally disagree with Kent’s decision, and plan to stay with Michele Bachmann because I truly believe in her, I cannot watch a good man like Kent Sorenson be attacked as a ‘sell-out.’”

Enos quit Bachmann's campaign yesterday, and has been replaced, the Post reported.

Despite her position in the polls, Bachmann denied that her campaign is failing in Iowa. She said she aims to complete her plans to visit all of the state’s 99 counties today.