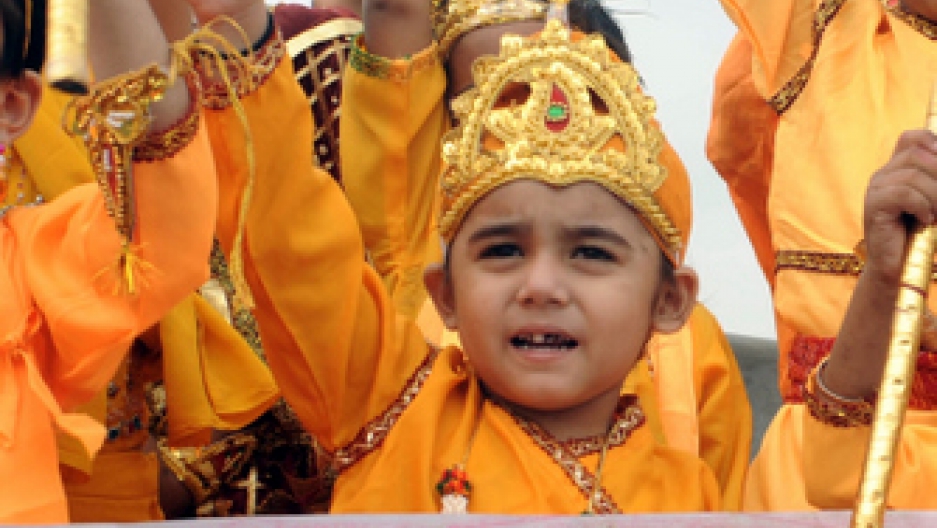 Indian children dressed as Hindu god Krishna hold placards as they shout slogans against corruption during a demonstration in Amritsar on August 20, 2011. The threat of amendments forced the government to put a proposed bill to create a powerful ombudsman to fight corruption on hold late Thursday. The parliament will not reconvene until February.
Credit: NARINDER NANU
Share

The Indian government was forced to put its proposed anti-corruption law on hold late Thursday, as a slew of objections and amendments by opposition legislators and a key ally made the prospect of winning a vote unlikely.  The parliament will not convene again until February, making the bill essentially dead in the water until after pivotal state elections in Uttar Pradesh.

In uncharacteristic overstatement, The Wall Street Journal called the failure "a major embarrassment" and claimed (without much substantiation, I would argue) that the rough-and-tumble over corruption has "scared away foreign investors" -- ignoring, at least in this article, the role of a rising deficit, persistent inflation, 13-odd rate hikes by the central bank, the failure to pass major economic reforms, a 20 percent plunge in the value of the rupee, and a contraction in industrial output.

The "major embarrassment" is also questionable.  Although the BJP has seized on the government's failure to get the bill through as evidence that Prime Minister Manmohan Singh "lacks the moral authority" to continue in office, Singh's Congress Party is most likely right in banking on its ability to blame its opponents and reluctant allies for this failure.  After all, the UPA aggressively pushed for the bill, as well as several other anti-corruption measures, in its belated response to pressure from Hazare's people.  Moreover, when you don't have a majority, you're expected to lose, so it's not so much embarrassing as irritating.

Meanwhile, a dismal turnout for Hazare's latest protest in Mumbai earlier this week suggests that enthusiasm for his movement may be waning.  And as I wrote earlier this week, that's not going to change as Team Anna embraces the hurly burly of politics and actively campaigns against the Congress Party in the next round of elections.  The reason: the anti-corruption movement was, essentially, an expression of anger against politicians and politics -- and now its leaders are becoming exactly the sort of people that they started out hammering.

As anybody digging into this blog will know, the bill would have created an ombudsman's office called the Lokpal with powers to investigate and prosecute corrupt government officials and bureaucrats, as demanded by street protesters led by Anna Hazare this summer.

Hazare's people had objected that the government's bill was too weak, however, because, among other things, it did not grant the Lokpal control over the Central Bureau of Investigation or envision a mechanism with which it could set up its own investigative body.

At least ostensibly, the opposition Bharatiya Janata Party (BJP) and United Progressive Alliance ally Trinamool Congress moved to block the bill because of provisions mandating the way the individual states should set up their own anti-corruption bodies -- which they claimed was an assault on India's federal structure.