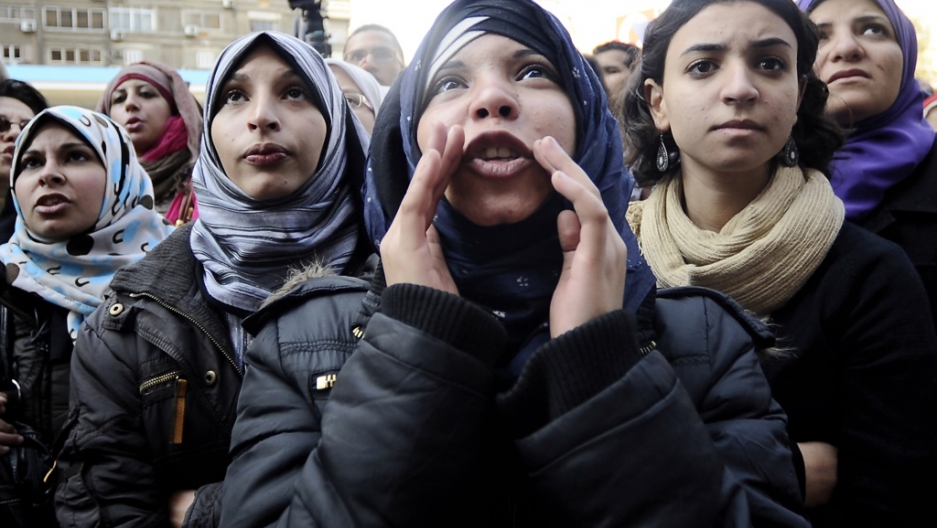 Egyptian women protest against the military's support for virginity tests on women in Cairo on Dec. 27, 2011.
Credit: Felipe Monteforte
Share

CAIRO, Egypt — Outside the Cairo office of the International Republican Institute (IRI), a US organization invited to monitor Egypt’s first democratic elections, a few police mill about on the quiet, tree-lined street, playing on their cell phones and drinking tea.

There is little indication that the day before, this building hosted one of the chaotic scenes of a sweeping afternoon raid by Egypt’s security forces against at least 10 pro-democracy and human rights organizations — three of which are directly linked to the United States — in an unprecedented development that has rattled civil society here.

As the dust settled on Thursday’s surprise crackdown — where troops with automatic weapons stormed offices, confiscated equipment and held staff incommunicado for hours — rights activists here say they are waking up to a new and troubling reality in post-revolution Egypt.

Nearly a year after an 18-day uprising ousted decades-long dictator, Hosni Mubarak, from power, civil society has again become the target of an increasingly repressive military junta (the Supreme Council of Armed Forces, or SCAF) that took control during the revolt and has since shown little tolerance for dissent.

Instead of shunning Mubarak’s heavy-handed tactics in favor of democratic reform, SCAF generals are embracing the old authoritarian policies with gusto — in a direct blow to the goals of February’s popular revolt.

“The raids today represent an escalation of repression unheard of even during the Mubarak regime,” said David J. Kramer, president of the Washington, DC-based Freedom House, one of the organizations raided, in a statement Thursday.

Freedom House is a watchdog organization that provides training and support to democracy advocates around the world, according to its website.

“These actions come in the context of an intensive campaign by the Egyptian Government to dismantle civil society through a politically-motivated legal campaign aimed at preventing ‘illegal foreign funding’ of civil society operations in Egypt,” Kramer said.

As anti-military protests picked-up steam in recent weeks, the army also ratcheted up its months-long bid to paint demonstrators and rights groups as foreign-backed rabble-rousers bent on destroying Egypt.

More from GlobalPost: Protests in Egypt continue despite military concessions

Many of the non-profit organizations targeted Thursday, including those based in the US, are now under investigation by the Ministry of Justice for illegally receiving foreign funds.

The move to scrutinize at least 30 civil society groups resuscitated a severe Mubarak-era law requiring NGOs to register with and obtain approval from the Ministry of Social Solidarity to receive funding from abroad, but which was only mildly enforced by the previous regime.

Registration often means allowing the ministry and domestic intelligence agencies access to documents, reports and even an organization’s meetings.

To escape the surveillance but still operate legally, many NGOs, including some of those raided, are registered not as non-profits but as companies.

According to a Ministry of Justice report leaked to the Egyptian press, IRI and the US-linked National Democratic Institute (NDI), also raided, together received $6.7 million in funds from the United States this year.

In contrast, SCAF received $1.3 billion in US military aid.

“We reject the NGO law because it is extremely repressive and we are not willing to accept it,” said Karim Medhat Ennarah, security sector researcher at the Egyptian Initiative for Personal Rights (EIPR), an advocacy and legal aid group operating as a private company.

EIPR is also under investigation, but was not raided on Thursday.

“We are operating legally but we refuse to join the repressive legal framework that would allow them [the Ministry of Social Solidarity] to control our work,” Ennarah said.

That is why groups like EIPR say the charges of illegal funding, while serious, are more of a red herring for a wider crackdown on local NGOs leading the campaign of criticism against SCAF in the media, on the streets, and in the courtroom.

Just one day before the raids, a civilian court judge challenged SCAF rule when he issued an injunction against the performance of so-called “virginity tests” on women detained by the military.

Samira Ibrahim, 25, took on SCAF after a military doctor gave her and at least 16 other female protestors “virginity tests” during a peaceful sit-in Cairo’s iconic Tahrir Square in March.

Activists hailed it as the first tangible victory against a military regime running its own trials — without the right to appeal — for the past 11 months, but said it could have provoked the ire of the increasingly paranoid generals.

“The [virginity test] ruling included a very strong condemnation of SCAF, and it was certainly unprecedented in the post-revolution era,” said Ennarah of EIPR, which aided Ibrahim’s legal defense.“The Ibrahim ruling was one day before the crackdown, so we can speculate [that it prompted the raid]. SCAF is politically naïve, and they are paranoid. They don’t understand political complexities.”

He says the attack on rights groups is a “preventative action” to cripple support for protests planned for Jan. 25, the one-year anniversary of the anti-Mubarak uprising.

“And part of an ongoing offensive by [an] emergent counter-revolution bloc,” led by SCAF, he said.