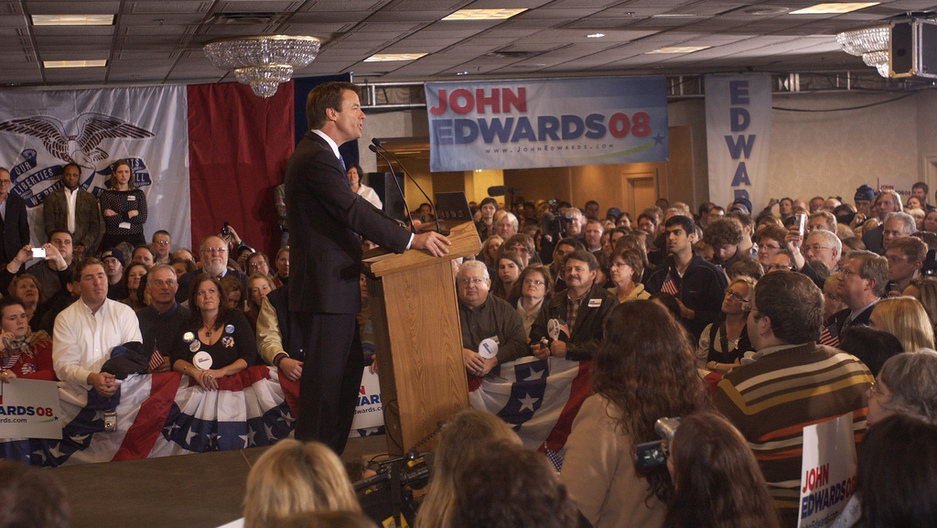 John Edwards speaks to Democratic voters during the 2008 Iowa Caucuses. On Jan. 3, it'll be the Republicans turn to turn out and choose a presidential nominee. (Photo from John Edwards 2008 via Flickr, cc-by-sa.)

On Tuesday, Iowans will get the chance to register their choice among Republican presidential candidates.

Will it be Mitt Romney? Or Ron Paul? How about Newt Gingrich or Rick Perry? Perhaps Michelle Bachmann, Rick Santorum or Jon Huntsman. The latest polling data show Romney with a slight edge over Paul, with Santorum and Gingrich tied a few points back from there. The other three candidates fall in after that.

But what will we learn from the Iowa Caucuses, a much anticipated nominating contest that is slated for Jan. 3. Robert J. Guttman, director of the Center on Politics and Foreign Relations at Johns Hopkins University, said while the process is unique and very American, it's gotten out of hand.

"The king-makers are the just over 100,000 people who come out on a cold night in Iowa in January to decide who's going to be the winner of the Iowa Caucus," Guttman said. "Iowa doesn't always produce the winners."

Take Paul, for instance, he said. He's typical of the candidate who can do well in Iowa because of his elaborate system of grass-roots support, but he'll never be the nominee, Guttman said.

But David Redlawsk, professor of political science at Rutgers University, said that unpredictability is exactly what makes the Iowa Caucus the kind of political process we want from our citizens. We want them to be involved in politics and pay attention, he said.

"It's the media that's the primary king-maker here," Redlawsk said. "What the media does is interprets the results of Iowa, the results of New Hampshire, as we go forward in a sequential process."

Guttman said, while it sounds anti-democratic, that the primary process has gotten out of hand.

"There are too many caucuses, too many primaries," he said. "I as I wrote, someone like Congressman Dennis Kucinich ran for president so he could get a date and get married. The reasons are totally obscure."

It also diminishes the role of political parties and conventions, which he thinks dilutes the quality of candidates.

"We get people who next week are going to appeal to extremes," Guttman said. "You can justifiably say we've have worse candidates since we've had primaries and caucuses then we did when the party bosses chose people."

Redlawsk says, however, that the best accomplishment of the Iowa Caucuses isn't to pick winners, but rather to bounce candidates out of the field.

"Eliminate those candidates who are not really real or who have not connected with the voters," he said.

Redlawsk also rejects the notion that candidate quality has declined since the start of primaries, but he said he hasn't seen any real proof of that.

"We're always kind of complaining that current days aren't as good as the good old days," he said. "The process has its ups and downs, it's not perfect, but it really connects people in ways we've long said we want people to be connected."